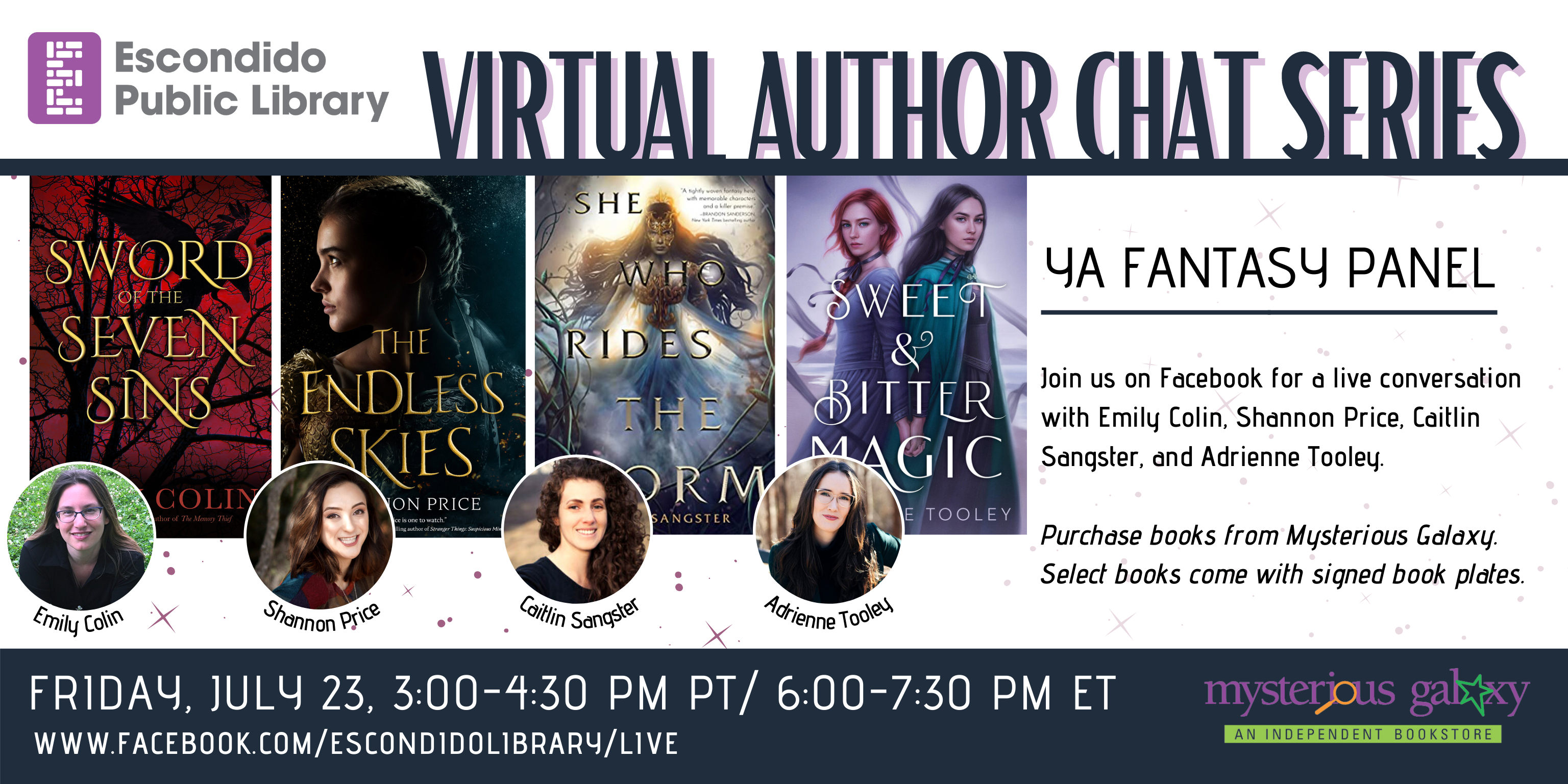 Join us on Facebook for a live conversation with Emily Colin, Shannon Price, Caitlin Sangster, and Adrienne Tooley. Books available below!
We will be taking questions from the viewers.

View our virtual event code of conduct here. Please note that it applies to all attendees, authors, and moderators and is to ensure our event spaces stay a positive, welcoming place for respectful discussions and multiple perspectives.

Emily Colin’s debut novel, THE MEMORY THIEF, was a New York Times bestseller and a Target Emerging Authors Pick. She is also the author of THE DREAM KEEPER’S DAUGHTER (Ballantine Books). Her young adult titles include the anthology WICKED SOUTH: SECRETS AND LIES and the SEVEN SINS series, both from Blue Crow Publishing, as well as the anthology UNBOUND: STORIES OF TRANSFORMATION, LOVE, AND MONSTERS (Five Points Press). Regardless of whether she’s writing for adults or teens, all of her books feature love stories and supernatural twists.  Learn more at https://emilycolin.com/

Shannon Price is a proud Filipina-American and Bay Area native. She once led an a cappella group for three years despite not knowing how to read music, and she carries that same level of confidence in every area of her life. When not writing, she can be found watching baking shows, exploring old bookstores, and going to the beach as often as she can. A Thousand Fires is her first novel. The Endless Skies releases on August 17th, 2021.  Learn more at https://spricewrites.com/

Caitlin Sangster is the author of the Last Star Burning trilogy and the founder and cohost of the Lit Service podcast. She grew up in the backwoods of Northern California, has lived in China, Taiwan, Utah, and Montana and can often be found dragging her poor husband and four children onto hikes that feature far too many bears. You can find her online at CaitlinSangster.com.

Adrienne Tooley grew up in Southern California, majored in musical theater in Pittsburgh, and now lives in Brooklyn with her wife, six guitars, and a banjo. In addition to writing novels, she is a singer/songwriter who has currently released three indie-folk EPs. Sweet & Bitter Magic is her debut novel.

About The Books
Sword of the Seven Sins
From New York Times-bestselling author Emily Colin comes a story of one young woman's battle for freedom in a future world where love is the ultimate sin.
Eva Marteinn never wanted to be a killer.
Raised in the Commonwealth, where citizens live and die by the code of the Seven Sins, Eva is sickened by the barbaric punishments the High Priests inflict. She sees the Bellators of Light, the Commonwealth's executioners, as no more than conscienceless killers.
When she's Chosen as the first female bellator-and can't refuse, on threat of exile or disgrace-Eva is devastated. But she turns out to be inordinately gifted at the very role she abhors...no thanks to her mentor, Ari Westergaard, who alternates between ignoring her and challenging her to impossible tests.

The Endless Skies
Shannon Price's The Endless Skies is a breakout standalone epic fantasy about shapeshifting warriors perfect for fans of Adrienne Young and Wonder Woman.
High above the sea, floats the pristine city of the Heliana. Home to winged-lion shapeshifters—the Leonodai—and protected from the world of humans by an elite group of warriors, the Heliana has only known peace.
After years of brutal training, seventeen-year-old Rowan is ready to prove her loyalty to the city and her people to become one of the Leonodai warriors. But before Rowan can take the oath, a deadly disease strikes the city’s children. Soon the warriors—including two of Rowan’s closest friends—are sent on a dangerous mission to find a fabled panacea deep within enemy lands.

Sweet and Bitter Magic
Adrienne Tooley's charming debut fantasy perfect for fans of Sorcery of Thorns and Girls of Paper and Fire, a witch cursed to never love meets a girl hiding her own dangerous magic, and the two strike a dangerous bargain to save their queendom.
Tamsin is the most powerful witch of her generation. But after committing the worst magical sin, she’s exiled by the ruling Coven and cursed with the inability to love. The only way she can get those feelings back—even for just a little while—is to steal love from others.
Wren is a source—a rare kind of person who is made of magic, despite being unable to use it herself. Sources are required to train with the Coven as soon as they discover their abilities, but Wren—the only caretaker to her ailing father—has spent her life hiding her secret.
When a magical plague ravages the queendom, Wren’s father falls victim. To save him, Wren proposes a bargain: if Tamsin will help her catch the dark witch responsible for creating the plague, then Wren will give Tamsin her love for her father.
Of course, love bargains are a tricky thing, and these two have a long, perilous journey ahead of them—that is, if they don’t kill each other first.

She Who Rides the Storm
In Caitlin Sangster's atmospheric YA fantasy, that is Wicked Saints meets There Will Come a Darkness, four teens are drawn into a high-stakes heist in the perilous tomb of an ancient shapeshifter king.
Long ago, shapeshifting monsters ruled the Commonwealth using blasphemous magic that fed on the souls of their subjects. Now, hundreds of years later, a new tomb has been uncovered, and despite the legends that disturbing a shapeshifter’s final resting place will wake them once again, the Warlord is determined to dig it up.
But it isn’t just the Warlord who means to brave the traps and pitfalls guarding the crypt.
A healer obsessed with tracking down the man who murdered her twin brother.
A runaway member of the Warlord’s Devoted order, haunted by his sister’s ghost.
A snotty archaeologist bent on finding the cure to his magical wasting disease.
A girl desperate to escape the cloistered life she didn’t choose.
All four are out to steal the same cursed sword rumored to be at the very bottom of the tomb. But some treasures should never see the light of day, and some secrets are best left buried…

A Baker's Guide to Robber Pie
YA novelist Caitlin Sangster makes her middle-grade debut in A Baker's Guide to Robber Pie, a fun fairytale filled with adventure, friendship, baking, and the power of a tale well-told.
A clever young girl looking for adventure gets more than she bargained for when she stumbles into a nest of robbers in this tale baked with magic, fun, and friendship!
Evie Baker is a great story-teller, an avid prankster, and a fantastic baker. And while she loves her parent’s bakery, she has no plans to stay in their small town and become stuffy or static. Evie wants to go on adventures and she knows just what she needs to do it!
With her best friend, Cecily, by her side, Evie sets off into the Old Forest to find one of the Fel, a group of crow-like magical creatures who can’t lie. She is sure her family’s irresistible raspberry tart and a carefully crafted deal will get them to take her on a magical adventure—without getting her eaten or worse. But the forest hides many dangers and when they finally find their Fel, they also discover a nest of robbers!
Having seen the Robber Lord’s face, Evie is whisked away into hiding for her own protection. But even in the queen’s own city, trouble has a way of finding her…

Last Star Burning (Trilogy)
To escape execution for a crime she didn’t commit, sixteen-year-old Sev is forced to run away from the only home she’s ever known in this “richly imagined” (BCCB, starred review) post-apocalyptic debut novel from Caitlin Sangster.
Sev is branded with the mark of a criminal—a star burned into her hand. That’s the penalty for being the daughter of the woman who betrayed their entire nation.
Now her mother’s body is displayed above Traitor’s Arch, kept in a paralyzed half sleep by the same plague that destroyed the rest of the world. And as further punishment, Sev is forced to do hard labor to prove that she’s more valuable alive than dead.
When the government blames Sev for a horrific bombing, she must escape the city or face the chopping block. Unimaginable dangers lurk outside the city walls, and Sev’s only hope of survival lies with the most unlikely person—Howl, the chairman’s son. Though he promises to lead her to safety, Howl has secrets, and Sev can’t help but wonder if he knows more about her past—and her mother’s crimes—than he lets on.

Sword of the Seven Sins (Paperback)

She Who Rides the Storm (The Gods-Touched Duology) (Hardcover)