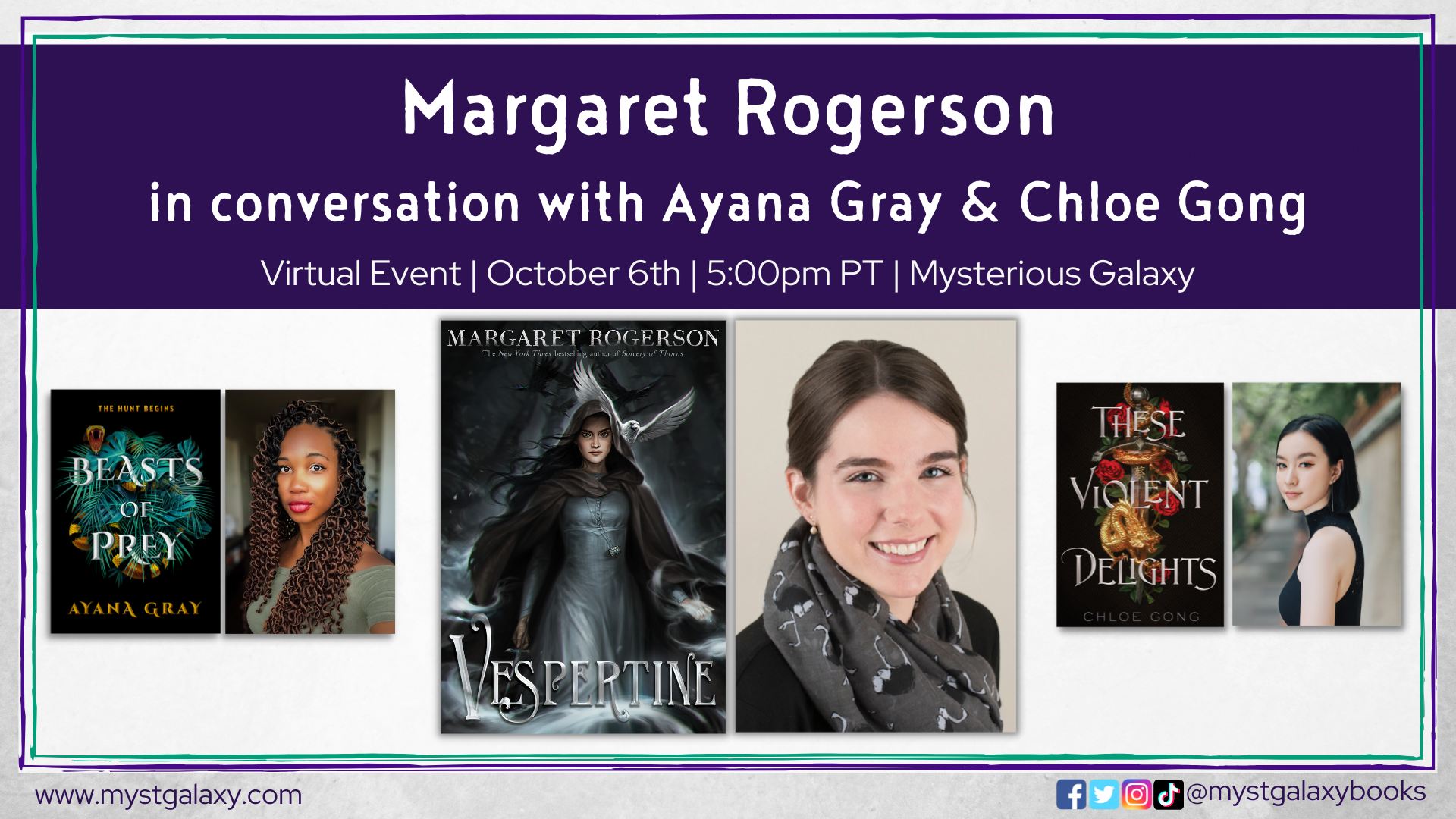 Event date:
Wednesday, October 6, 2021 - 5:00pm
Join us for the US-stop on the epic international launch of VESPERTINE! New York Times bestselling author Margaret Rogerson debuted with the sumptuous An Enchantment of Ravens and swept us off our feet with Sorcery of Thorns…this fall, Vespertine will devour you. Join Margaret and a few special guests as they celebrate the launch of the thrilling first book in a brand-new series.
TICKETED EVENT:
With your purchase of Vespertine from Mysterious Galaxy you will get a viewing link for the event. Each book will also include a specially-designed bookplate signed by Margaret and the first (# TO COME) purchases will receive an EXCLUSIVE swag item.
*Please note, the event link will be emailed directly to you day-of the event, 10/6
ABOUT THE BOOK:
From the New York Times bestselling author of Sorcery of Thorns and An Enchantment of Ravens comes a thrilling new YA fantasy about a teen girl with mythic abilities who must defend her world against restless spirits of the dead.

The dead of Loraille do not rest.

Artemisia is training to be a Gray Sister, a nun who cleanses the bodies of the deceased so that their souls can pass on; otherwise, they will rise as spirits with a ravenous hunger for the living. She would rather deal with the dead than the living, who trade whispers about her scarred hands and troubled past.

When her convent is attacked by possessed soldiers, Artemisia defends it by awakening an ancient spirit bound to a saint’s relic. It is a revenant, a malevolent being that threatens to possess her the moment she drops her guard. Wielding its extraordinary power almost consumes her—but death has come to Loraille, and only a vespertine, a priestess trained to wield a high relic, has any chance of stopping it. With all knowledge of vespertines lost to time, Artemisia turns to the last remaining expert for help: the revenant itself.

As she unravels a sinister mystery of saints, secrets, and dark magic, her bond with the revenant grows. And when a hidden evil begins to surface, she discovers that facing this enemy might require her to betray everything she has been taught to believe—if the revenant doesn’t betray her first.
ABOUT THE AUTHORS:
Margaret Rogerson is the author of the New York Times bestsellers An Enchantment of Ravens and Sorcery of Thorns. She has a bachelor’s degree in cultural anthropology from Miami University. When not reading or writing she enjoys sketching, gaming, making pudding, and watching more documentaries than is socially acceptable (according to some). She lives near Cincinnati, Ohio, beside a garden full of hummingbirds and roses. Visit her at MargaretRogerson.com.
Ayana Gray is an author of speculative works and lover of all things monsters, mythos, and #MelaninMagic. Originally from Atlanta, she now lives in Little Rock, AR, where she reads avidly, follows Formula One racing, and worries over her adopted baby black rhino, Apollo. Beasts of Prey is her debut novel.
Chloe Gong is the New York Times bestselling author of These Violent Delights and its sequel, Our Violent Ends. She is a recent graduate of the University of Pennsylvania, where she double-majored in English and international relations. Born in Shanghai and raised in Auckland, New Zealand, Chloe is now located in New York pretending to be a real adult. You can find her on Twitter, Instagram, and TikTok under @TheChloeGong or check out her website at TheChloeGong.com.

An Enchantment of Ravens (Paperback)