New owners and location for Mysterious Galaxy in 2020

Last month, we announced that Mysterious Galaxy was in danger of closing its doors unless a new owner and location were found. We are incredibly happy to announce that we have not only found a new home, but also new owners that are ready to take Mysterious Galaxy into the next decade and beyond! Please read on for all of our news and an introduction to our new owners. 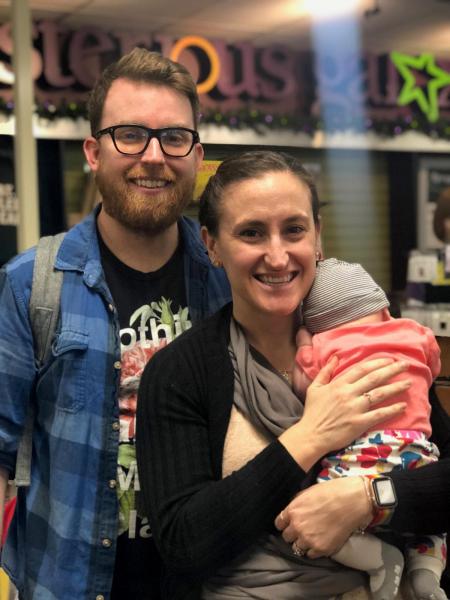 A Letter from new owners Matt and Jenni:

We are so excited about our new roles as part of the Mysterious Galaxy family. When we attended the holiday party last Saturday countless of you came up to us and thanked us for saving the store. We are incredibly grateful for your support. One thing we would like you to know above all else is that we, like you, are fans of Mysterious Galaxy. We love Mysterious Galaxy for the same reasons you do and know that it will survive, will be saved, only because of your continued support. When they founded Mysterious Galaxy twenty-seven years ago, Terry, Maryelizabeth, and Jeff also founded a community of readers connected by a passion for reading. As we begin this next chapter, we want to keep all that makes Mysterious Galaxy special while continuing to expand its presence in the community.

Matt and I first met at CSU Fullerton in 2010 where we were both graduate students studying for MAs in English. We fell in love over discussions of James Joyce (the class we got to know each other in), Harry Potter (Matt’s a Hufflepuff, Jenni’s a Slytherin), and Star Wars (even though when they first met Matt said his favorite film was Episode I—don’t worry, he has since seen the error of his ways). We got married in August 2016. The event was literary-themed. We currently live in Clairemont with our new daughter Amelia and our two dogs Skywalker and Tonks. Matt now works in marketing at a local tech company and Jenni received her PhD in Literature in Spring 2019 and teaches at UCSD. When we moved to San Diego in Fall 2013, we quickly became Mysterious Galaxy regulars. As lifelong readers and avid fans of science fiction and fantasy, we love being a part of the Mysterious Galaxy community.

As we step into our new roles, we think it is important for you to know a bit more about us as a couple but also as individuals and we each wanted to share something about ourselves.

From Jenni: The first books I ever loved, the ones I read over and over again until the bindings practically disintegrated, were The Song of the Lioness and The Immortals quartets by Tamora Pierce. I spent much of my childhood dreaming about having purple eyes and debating whether Alanna should have ended up Jonathan or George with my cousin Courtney. As an adult I still get carried away by reading. For my degree I focused on disability in 20th century Anglophone literature. I could talk about James Joyce, Virginia Woolf, and Shani Mootoo for hours. I’m also a sucker for romance and fantasy. Some of my favorites include Helen Hoang, Sarah J. Maas, J. R. Ward, Richelle Mead, and Jasmine Guillory. I'm currently reading Arora Blazing by Jessie Mihalik & Moving Forward Sideways Like a Crab by Shani Mootoo.

From Matt: I have spent far too much time trying to figure out how to make a lightsaber work. Like, how do you get light to take a shape? Growing up, my days were filled with thoughts about the worlds authors built in my favorite series: Star Wars, Harry Potter, Feist’s Magician series, Eragon, and countless others. In college, I decided to think some more about books, so I studied literature, including Latin American authors such as Jorge Luis Borges and Ricardo Piglia, and classic authors like James Joyce and Franz Kafka. I’m always looking for a new world to stumble upon. I'm currently reading: Iron Gold by Pierce Brown & The Sympathizer by Viet Thanh Nguyen.

We are both unbelievably thankful to Terry Gilman, Maryelizabeth Yturralde, and Jeff Mariotte, for creating a space welcoming science fiction and fantasy lovers of any age. They have given us, as the bookstore's name suggests, countless galaxies to explore through reading. Ones that just happen to exist every time you open a book and are never farther away than the next page. We would also like to thank store manager Kelly Orazi, and the rest of the Mysterious Galaxy staff for their support through this transition. We know the expert team of booksellers is much of what makes Mysterious Galaxy special. The store wouldn’t be the same without them. They are always ready with the perfect recommendation for any customer. We wouldn’t want to embark on this journey with anyone else. *insert Lord of the Rings pun here*

Moving forward, we plan to uphold all that makes Mysterious Galaxy special. We respect and value the store’s reputation as an integral part of the literary community in San Diego. We hope that as we enter this new chapter, you will trust us to preserve that identity. We have always seen Mysterious Galaxy as a safe place for anyone interested in exploring new worlds and never want that to change.