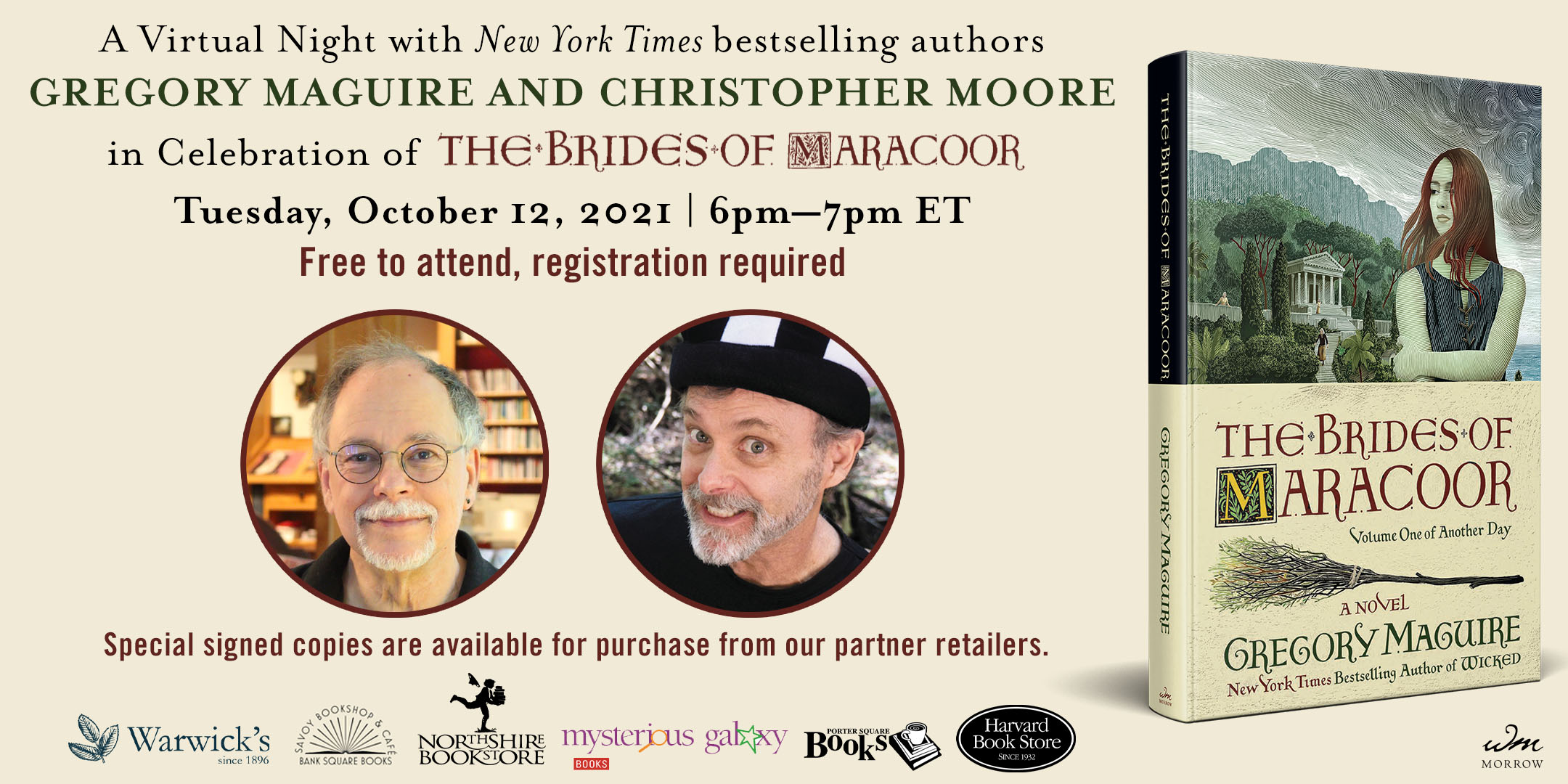 Event date:
Tuesday, October 12, 2021 - 3:00pm
Join multimillion-copy bestselling author Gregory Maguire as he discusses The Brides of Maracoor, the first book in a new Wicked spin-off series, with New York Times bestselling author Christopher Moore—in partnership with independent booksellers across the US!
The event is free to attend, but you must register in advance HERE.
How to Order a Signed Book
When you purchase The Brides Maracoor of for this event you'll get a signed edition! Simply write "signed copy" in the order comments at checkout to reserve your copy!​
ABOUT THE PARTICIPANTS
Gregory Maguire is the New York Times bestselling author of The Brides of Maracoor; A Wild Winter Swan; Hiddensee; After Alice; Confessions of an Ugly Stepsister; Lost; Mirror Mirror; and the Wicked Years, a series that includes Wicked—the beloved classic that is the basis for the blockbuster Tony Award–winning Broadway musical of the same name—Son of a Witch, A Lion Among Men, and Out of Oz. Maguire has lectured on art, literature, and culture both at home and abroad. He lives with his family in New England and in France.
https://gregorymaguire.com/
Christopher Moore is the author of sixteen previous novels, including Noir, Secondhand Souls, Sacré Bleu, Fool, and Lamb. He lives in San Francisco, California.
https://www.chrismoore.com/
ABOUT THE BRIDES OF MARACOOR
25 years after the global sensation Wicked first flew into our lives, New York Times bestselling author Gregory Maguire’s first book in a new spin-off sequel series, Another Day, is landing on October 12, 2021: THE BRIDES OF MARACOOR. Featuring the brilliant imagination that made Wicked into the multimillion-copy-bestselling novel, Tony Award-winning Broadway musical, and cultural phenomenon we know today, THE BRIDES OF MARACOOR welcomes Elphaba’s granddaughter and a few familiar faces from Oz—all in a fantastically new setting filled with a new and compelling cast of characters. Gregory’s storytelling consistently inspires raves from critics who have found his novels “mystical and filled with wonder” (People Magazine), “inventive” (BuzzFeed), and imbued with a “fresh perspective” (Entertainment Weekly). In THE BRIDES OF MARACOOR, he combines all these elements and more to produce this highly anticipated and supremely entertaining read.
Luminous, enchanting, and rendered in elegant prose, THE BRIDES OF MARACOOR finds Elphaba’s granddaughter, Rain, washing ashore on a foreign island, Maracoor Spot. Comatose from crashing into the sea, Rain is taken in by a community of seven “brides” committed to obscure devotional practices seemingly necessary to the existence of this universe. Like Elphaba, the young and vibrantly green-skinned Rain is a misunderstood born leader who instantly upends the lives and orderly ways of those around her. Meanwhile, as the mainland of Maracoor suffers an assault by a foreign navy, the island’s civil-servant overseer struggles to understand how an alien arriving on the shores of Maracoor Spot could threaten the stability and well-being of an entire nation. Is it myth or magic at work, for good or for ill?
The Another Day trilogy will follow this green-skinned girl from the island outpost into the unmapped badlands of Maracoor before she learns how, and becomes ready, to turn her broom homeward, back to her family and her lover, back to Oz, which—in its beauty, suffering, mystery, injustice, and possibility—reminds us all too clearly of the troubled yet sacred terrain of our own lives.