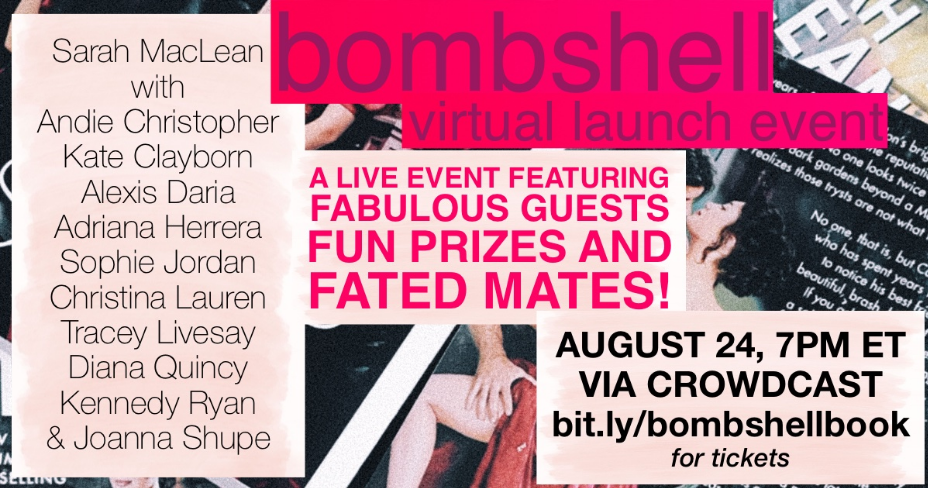 Your Purchase of a ticket bundle includes:
Bombshell by Sarah MacLean
Exclusive viewing link for the virtual event.
Signed Bookplate
Limited edition sticker only attendees of this event will receive
About the Authors
A life-long romance reader, Sarah MacLean wrote her first romance novel on a dare, and never looked back. She is the New York Times and USA Today bestselling author of romances translated into more than twenty languages, a romance columnist, and the co-host of the weekly romance novel podcast, Fated Mates. A graduate of Smith College & Harvard University, she lives in New York City.
USA Today bestselling author Andie J. Christopher writes edgy, funny, sexy contemporary romance featuring heat, humor, and dirty talking heroes that make readers sweat. A graduate of the University of Notre Dame and Stanford Law School, she grew up in a family of voracious readers, and picked up her first romance novel at age twelve when she’d finished reading everything else in her grandmother’s house.
Kate Clayborn is the two-time RITAⓇ Award-nominated author of highly acclaimed romantic comedies, including Love Lettering, Love at First, and the Chance of a Lifetime series. Her novels have been named Best Romances of the Year by O, The Oprah Magazine, Entertainment Weekly, The Washington Post, Buzzfeed, Romper, and more.
Adriana Herrera was born and raised in the Caribbean, but for the last 15 years has let her job (and her spouse) take her all over the world. She loves writing stories about people who look and sound like her people, getting unapologetic happy endings. Her Dreamers series has received starred reviews from Publisher’s Weekly and Booklist and has been featured in The TODAY Show on NBC, Entertainment Weekly, NPR, Library Journal and The Washington Post. Adriana is an outspoken advocate for diversity in romance and has written for Remezcla and Bustle about Own Voices in the genre. She’s one of the co-creators of the Queer Romance PoC Collective.
Sophie Jordan grew up in the Texas hill country where she wove fantasies of dragons, warriors, and princesses. A former high school English teacher, she’s the New York Times, USA Today, and international bestselling author of more than thirty novels. She now lives in Houston with her family. When she’s not writing, she spends her time overloading on caffeine (lattes preferred), talking plotlines with anyone who will listen (including her kids), and cramming her DVR with anything that has a happily ever after.
Christina Lauren is the combined pen name of longtime writing partners and best friends Christina Hobbs and Lauren Billings, the New York Times, USA TODAY, and #1 internationally bestselling authors of the Beautiful and Wild Seasons series, Dating You / Hating You, Autoboyography, Love and Other Words, Roomies, Josh and Hazel’s Guide to Not Dating, My Favorite Half-Night Stand, The Unhoneymooners, Twice in a Blue Moon, and The Soulmate Equation. You can find them online at ChristinaLaurenBooks.com, @ChristinaLauren on Instagram, or @ChristinaLauren on Twitter.
A former criminal defense attorney, Tracey Livesay finds crafting believable happily ever afters slightly more challenging than protecting our constitutional rights, but she's never regretted following her heart instead of her law degree. She has been featured in Entertainment Weekly, the Washington Post, and CBS This Morning. Tracey lives in Virginia with her husband—who she met on the very first day of law school—and their three children.
Bestselling author Diana Quincy is an award-winning former television journalist who decided to make up stories where a happy ending is always guaranteed. Her books have been included on "Best of" lists in Library Journal and the Washington Post. As a U.S. Foreign Service brat, Diana grew up all over the world, but is now happily settled in Virginia with her husband and two sons. When not bent over her laptop, Diana spends time with her family, reads, practices yoga and plots her next travel adventure.
Joanna Shupe has always loved history, ever since she saw her first Schoolhouse Rock cartoon. Since then, her books have appeared on numerous yearly “best of” lists, including Publishers Weekly, The Washington Post, Kirkus Reviews, Kobo and BookPage. She lives in New Jersey with her two spirited daughters and dashing husband.
A RITA® Award Winner, USA Today and Amazon Top 12 Bestseller, Kennedy Ryan writes for women from all walks of life, empowering them and placing them firmly at the center of each story and in charge of their own destinies. Her heroes respect, cherish and lose their minds for the women who capture their hearts.
Alexis Daria is an award-winning contemporary romance author, former artist, and native New Yorker. Her debut, TAKE THE LEAD, was a 2018 RITA® Award winner for “Best First Book” and was named one of the Best Romance Novels of 2017 by The Washington Post and Entertainment Weekly. She loves social media, and you can find her live-tweeting her favorite TV shows at @alexisdaria, or talking about writing and books on her blog at alexisdaria.com.

Your Purchase of a tickete bundle includes: