Virtual Event - An Evening with Jay Kristoff and Christopher Paolini 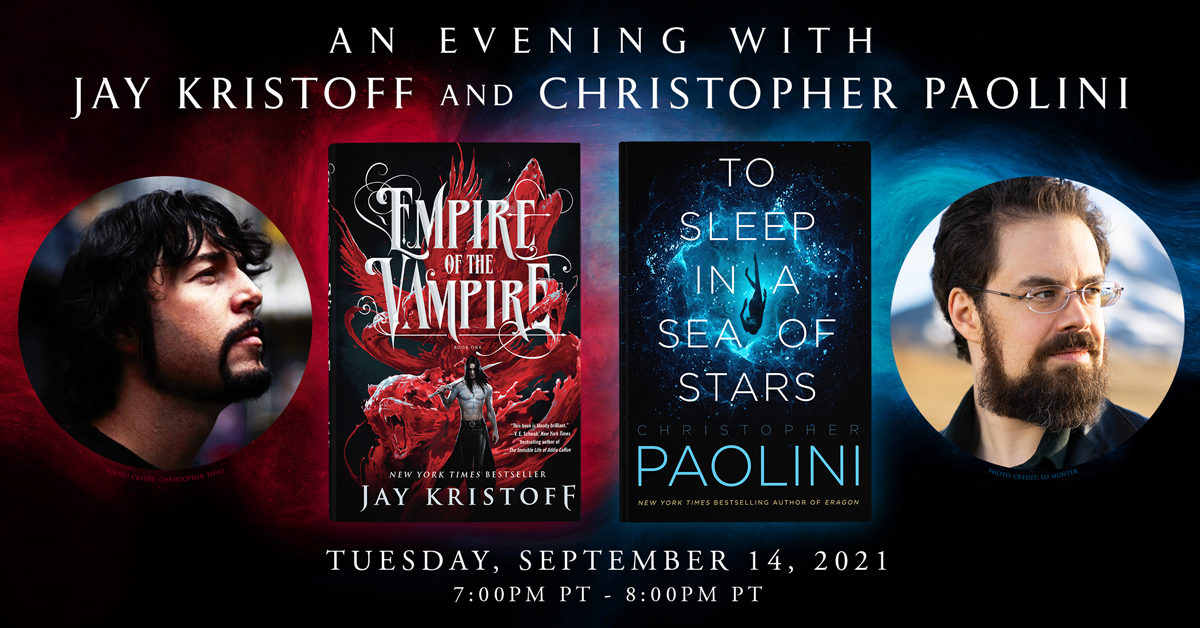 Event date:
Tuesday, September 14, 2021 - 7:00pm
Mysterious Galaxy, St. Martin’s Publishing Group, and TOR are honored to present “An Evening with Jay Kristoff and Christopher Paolini” to celebrate the hardcover release of EMPIRE OF THE VAMPIRE and the upcoming paperback release of TO SLEEP IN A SEA OF STARS. Jay and Christopher will be joined by bookseller Samantha Hendricks from Schuler Books to discuss their books, writing for young adults and adults, and much more. Click here to register for the event and here to submit a question to the authors!
How to Order a Signed Empire of the Vampire & Exclusive Deleted Scene!
Attendees who order their Empire of the Vampire from Mysterious Galaxy will receive exclusives! Copies of EMPIRE OF THE VAMPIRE will be signed and customers will receive an exclusive PDF of a deleted scene from the book.
How to Order a Bookplate from Christopher Paolini!
Copies of TO SLEEP IN A SEA OF STARS will come with a signed bookplate from Christopher Paolini.
About the Authors and Moderator:
Jay Kristoff is a #1 international, New York Times and USA Today bestselling author of fantasy and science fiction. He is the winner of eight Aurealis Awards, an ABIA, has over one and a half a million books in print and is published in over thirty five countries, most of which he has never visited. He is as surprised about all of this as you are. He is 6’7 and has approximately 11,500 days to live. He does not believe in happy endings.
Christopher Paolini was born in Southern California and has lived most of his life in Paradise Valley, Montana. He published his first novel, Eragon, in 2003 at the age of nineteen, and quickly became a publishing phenomenon. His Inheritance Cycle—Eragon and its three sequels—have sold nearly 40 million copies worldwide. To Sleep in a Sea of Stars is his first adult novel.
Samantha Hendricks is the Event Coordinator for Schuler Books and Nicola’s Books, a group of three of the largest independently owned bookstores in the country. Always looking for the next creative challenge and how to make each event memorable, her co-workers have been known to call her a little “extra”. When she’s not hosting (currently virtual) events you’ll find her reading the next great memoir or a picture book with her little ones. She likes her coffee cold, tea hot, and believes that food is it’s own love language.

Empire of the Vampire (Hardcover)

To Sleep in a Sea of Stars (Paperback)

Nevernight: Book One of the Nevernight Chronicle (Paperback)

The Fork, the Witch, and the Worm: Tales from Alagaësia (Volume 1: Eragon) (Large Print / Paperback)