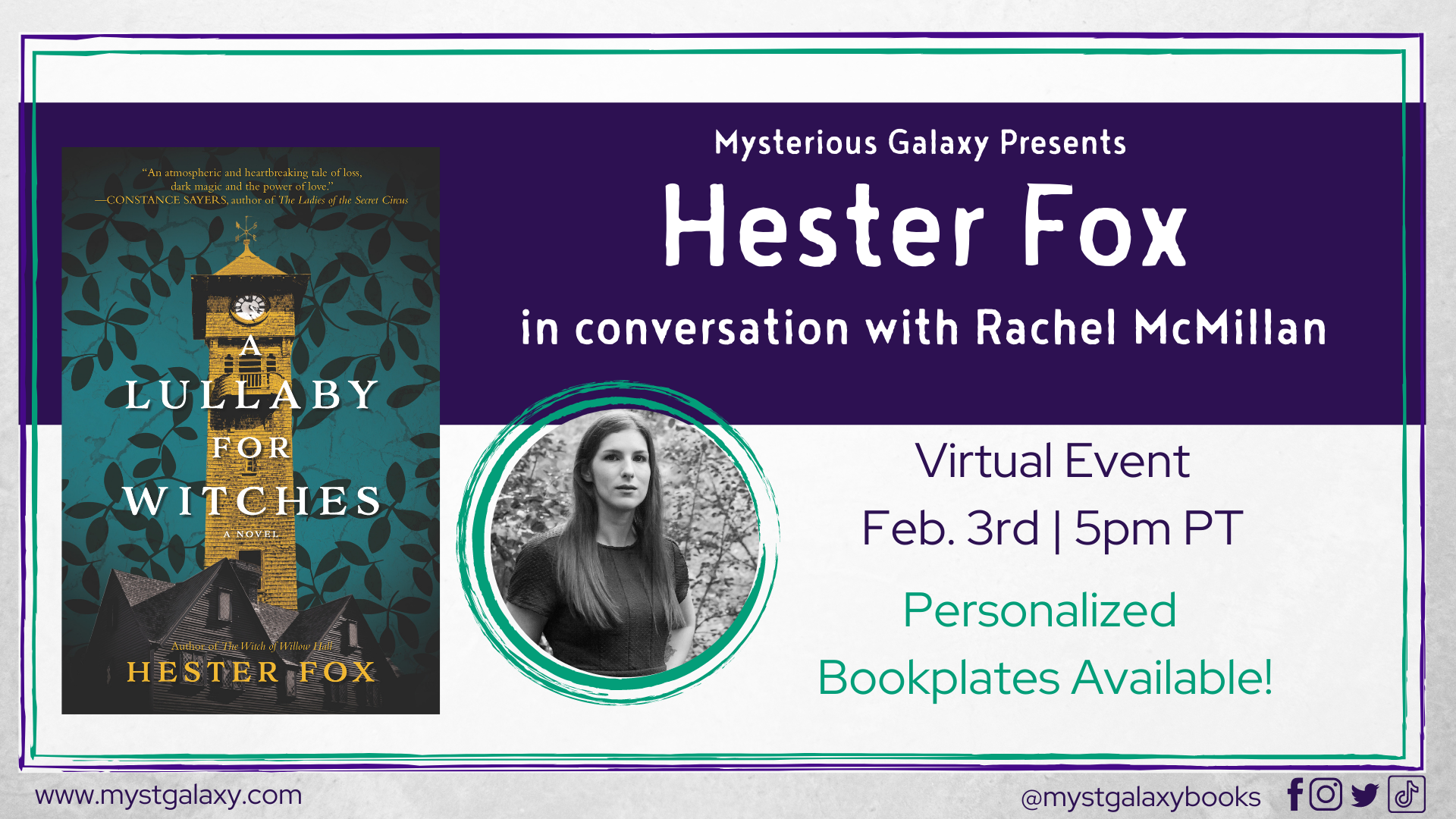 Event date:
Thursday, February 3, 2022 - 5:00pm
Mysterious Galaxy's virtual events are hosted on Crowdcast. Click here to register for the event and here to view our virtual code of conduct. Accessibility: Real-time captioning for all Crowdcast events is available via Google Chrome. For enabling captions, please follow this guide. More info here.
Personalized Bookplates available for orders of A LULLABY FOR WITCHES!
How to Order a Signed/Personalized Bookplate
About the Authors
Hester Fox is a full-time writer and mother, with a background in museum work and historical archaeology. A native New-Englander, she now lives in rural Virginia with her husband and their son.
Rachel McMillan writes across myriad genres like historical mysteries and romance, is a keen history enthusiast, and a lifelong bibliophile. When not writing or reading, she can most often be found drinking tea and watching British miniseries. Rachel lives in bustling Toronto, where she works in educational publishing and pursues her passion for art, literature, music, and theater.
About the Book
Two women. A history of witchcraft. And a deep-rooted female power that sings across the centuries.
Once there was a young woman from a well-to-do New England family who never quite fit with the drawing rooms and parlors of her kin.
Called instead to the tangled woods and wild cliffs surrounding her family's estate, Margaret Harlowe grew both stranger and more beautiful as she cultivated her uncanny power. Soon, whispers of "witch" dogged her footsteps, and Margaret's power began to wind itself with the tendrils of something darker.
One hundred and fifty years later, Augusta Podos takes a dream job at Harlowe House, the historic home of a wealthy New England family that has been turned into a small museum in Tynemouth, Massachusetts. When Augusta stumbles across an oblique reference to a daughter of the Harlowes who has nearly been expunged from the historical record, the mystery is too intriguing to ignore.
But as she digs deeper, something sinister unfurls from its sleep, a dark power that binds one woman to the other across lines of blood and time. If Augusta can't resist its allure, everything she knows and loves--including her very life--could be lost forever.

A Lullaby for Witches (Paperback)

A Lesson in Love and Murder (Kobo eBook)