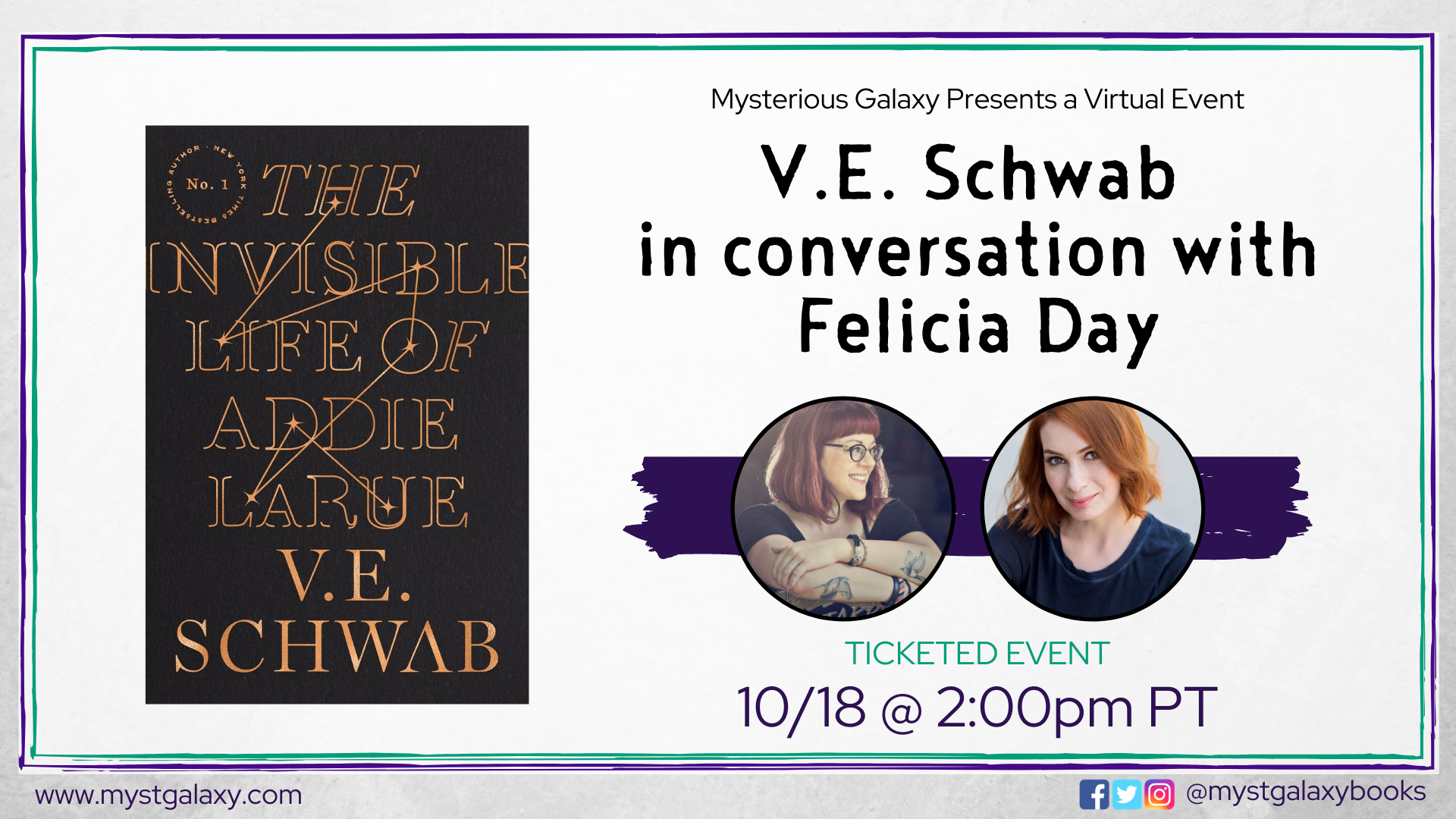 Event date:
Sunday, October 18, 2020 - 2:00pm
Join us in welcoming New York Times bestselling authors V. E. Schwab and Felicia Day as they discuss Schwab’s new genre defying novel, The Invisible Life of Addie LaRue!
Ticketed Event
This is a ticketed event and requires advance purchase of The Invisible Life of Addie LaRue. Each purchase includes a copy of the book and access to the event. You will receive an email with the event link and password the morning of the event. View our virtual event code of conduct here. Please note that it applies to all attendees, authors, and moderators and is to ensure our event spaces stay a positive, welcoming place for respectful discussions and multiple perspectives.
Signed Bookplates Available! See below for purchasing options.
Special Giveaway!
ALL attendees will receive a custom 6x9 Addie art print, commissioned by Schwab for this tour!
Aslo click here to submit your info for a giveaway through the publisher! (will go live 8/17)
About the Authors
VICTORIA “V.E.” SCHWAB is the #1 New York Times bestselling author of more than a dozen books, including the acclaimed Shades of Magic series, Villains series, This Savage Song, and Our Dark Duet. Her work has received critical acclaim, been featured in the New York Times, Entertainment Weekly, Washington Post and more, translated into more than a dozen languages, and has been optioned for television and film. When she’s not haunting Paris streets or trudging up English hillsides, she lives in Edinburgh, Scotland and is usually tucked in the corner of a coffee shop, dreaming up monsters.
Felicia Day is a professional actress who has appeared in numerous television shows and films, including Supernatural, The Magicians, and Mystery Science Theatre 3000. However, Felicia is best known for her work in the web video world, behind and in front of the camera. She co-starred in Joss Whedon’s Internet musical Dr. Horrible’s Sing-Along Blog, which won an Emmy in 2009. She also created and starred in the seminal web series The Guild. In 2012, Felicia created a production company called Geek & Sundry that pioneered content on YouTube, Twitch and other platforms. It was sold to Legendary Entertainment in 2015. Since writing her New York Times bestselling memoir You're Never Weird on the Internet (Almost) in 2016, Felicia has continued to work on her own creative projects as a producer, writer, and actor. Most recently she is working as a producer with Freeform on Woman World, an animated TV show based on the award-winning graphic novel.

A Conjuring of Light: A Novel (Shades of Magic #3) (Hardcover)

A Gathering of Shadows: A Novel (Shades of Magic #2) (Hardcover)

A Darker Shade of Magic: A Novel (Shades of Magic #1) (Hardcover)

Embrace Your Weird: Face Your Fears and Unleash Creativity (Paperback)

You're Never Weird on the Internet (Almost): A Memoir (Paperback)