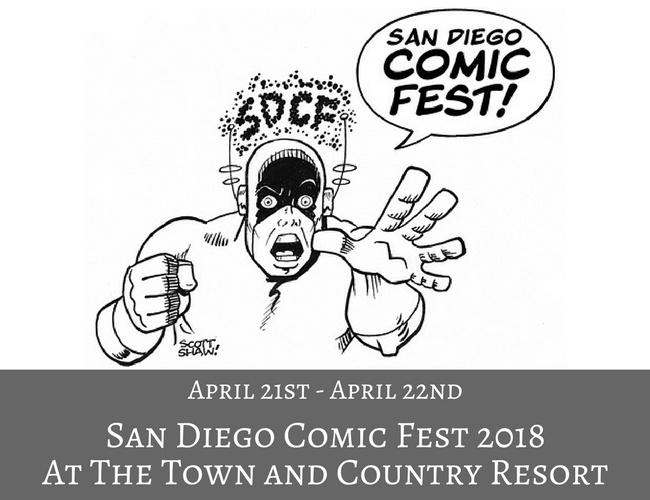 “The San Diego Comic Fest is the friendly comic convention with a casual atmosphere and an intimate scale that allows fans to mingle directly with professionals and exhibitors. It’s the place where you can indulge your love of comics, science fiction, and films, and meet an outstanding array of professional creators without high-priced tickets, crowding, or long lines.“

The theme for 2018 is the 200th anniversary of Mary Shelley’s Frankenstein, with special guest Sara Karloff, daughter of Boris Karloff!

If Tomorrow Comes: Book 2 of the Yesterday's Kin Trilogy (Hardcover)

Ten years after the Aliens left Earth, humanity succeeds in building a ship, Friendship, to follow them home to Kindred. Aboard are a crew of scientists, diplomats, and a squad of Rangers to protect them. But when the Friendship arrives, they find nothing they expected. No interplanetary culture, no industrial base--and no cure for the spore disease.

A timeslip in the apparently instantaneous travel between worlds has occurred and far more than ten years have passed.

Once again scientists find themselves in a race against time to save humanity and their kind from a deadly virus while a clock of a different sort runs down on a military solution no less deadly to all. Amid devastation and plague come stories of heroism and sacrifice and of genetic destiny and free choice, with its implicit promise of conscious change.

The Gurus made their presence on Earth known thirteen years ago. Providing technology and scientific insights far beyond what mankind was capable of, they became indispensable advisors and promised even more gifts that we just couldn't pass up.
But they were followed by mortal enemies -- the Antagonists -- from sun to sun, planet to planet, and now the Gurus are stretched thin -- and they need humanity's help.
Our first bill has come due.
Skyrines like Michael Venn have been volunteered to pay the price. They face insidious enemies who were already inside the solar system, establishing a beachhead on Mars.
Venn and his comrades will be lucky to make it out alive -- let alone preserve the future of all of mankind.

Partnering with the Arthur C. Clarke Center for Human Imagination, and inspired by Brin's nonfiction book The Transparent Society, noted author and futurist David Brin and scholar Stephen Potts have compiled essays and short stories from writers such as Robert J. Sawyer, James Morrow, William Gibson, Damon Knight, Jack McDevitt, and many others to examine the benefits and pitfalls of technologic transparency in all its permutations.

DC Comics is proud to present an all-new retrospective edition of one of the greatest graphic novels ever in WATCHMEN: THE ANNOTATED EDITION. This book examines each of the series' twelve issues in unprecedented detail, moving page by page and panel by panel to reveal the hidden foundations of this milestone in modern storytelling.

Edited with notes by Leslie S. Klinger, this new edition draws upon critical and scholastic commentary, in-depth interviews with Dave Gibbons, and previously unseen original source material, all printed in black and white. Klinger provides the reader with a unique and comprehensive view of WATCHMEN as both a singular artistic achievement and a transformative event in the history of comics as a medium.

Set in a world in which history has been forever altered by the existence of superheroes, Alan Moore and Dave Gibbons' monumental graphic novel WATCHMEN is one of the most influential comic book series of all time. Following two generations of masked crime-fighters from the end of World War II to the height of the Cold War, this compelling tale unfolds from a simple murder mystery into an epic saga of power, corruption and the ultimate meaning of humanity.

More than 30 years after it was first published, Moore and Gibbons' masterpiece continues to inspire and entertain readers around the world. Named one of Time magazine's 100 best English-language novels of the 20th century, WATCHMEN has won countless critical accolades and honors, including the Eisner Award and the Hugo Award.