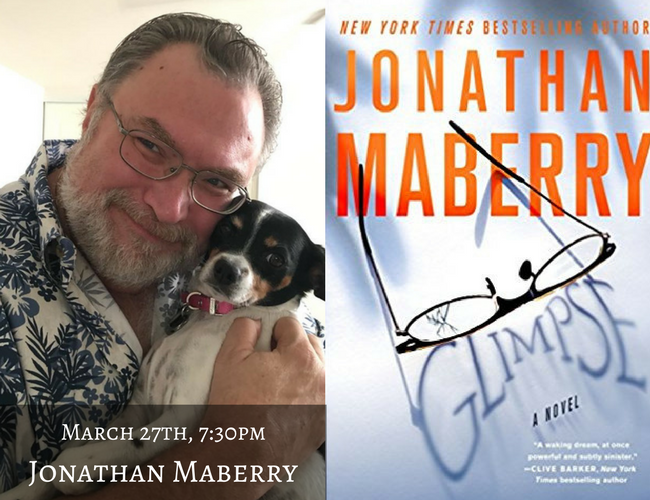 Acclaimed New York Times best-selling author Jonathan Maberry has been a friend of Mysterious Galaxy for many years, including leading monthly meetings of the Writers Coffeehouse in-store, appearing with the Mysterious Galaxy booksellers at conventions, and encouraging readers to acquire signed copies of his works through MG's Upstream program.  We’re excited for him to be signing his new book, Glimpse, on its release day!  Glimpse is a chilling thriller that explores what happens when reality and nightmares converge, and how far one will go to protect the innocent when their own brain is a threat. It’s "a waking dream, at once powerful and subtly sinister." ―Clive Barker Jonathan also is a frequent editor and collaborator in a variety of media, including games and comics.

Rain Thomas is a mess. Seven years an addict and three difficult years clean. Racked by guilt for the baby she gave up for adoption when she was sixteen. Still grieving for the boy's father who died in Iraq. Alone, discarded by her family, with only the damaged members of her narcotics anonymous meetings as friends. Them, and the voices in her head. One morning, on the way to a much-needed job interview, she borrows reading glasses to review her resume. There is a small crack in one lens and through that damaged slice of glass she sees a young boy go running down the aisle of the subway train. Is he screaming with laughter or just screaming? When she tries to find the boy, he's gone and no one has seen him.

The day spins out of control. Rain loses whole chunks of time. The voices she hears are telling her horrible things. And Doctor Nine, a spectral boogey man conjured in drug induced hallucinogens is now hunting her in the real world. Doctor Nine is also chasing that boy. A boy who looks so much like Rain's dead boyfriend. Unsure whether she is insane or if the world itself is broken, Rain begins a mother's quest for her lost child through a world where reality and nightmare are in a head-on collision. How far will one person go to save someone they love?

Go on the adventure of a lifetime with a teen and his family after they are selected to colonize Mars in this thrilling new novel from multiple Bram Stoker Award-winning author Jonathan Maberry.

Tristan has known that he and his family were going to be on the first mission to colonize Mars since he was twelve years old, and he has been training ever since. However, knowing that he would be leaving for Mars with no plan to return didn't stop him from falling in love with Izzy.

But now, at sixteen, it's time to leave Earth, and he's forced to face what he must leave behind in exchange for an uncertain future. When the news hits that another ship is already headed to colonize Mars, and the NeoLuddite terrorist group begins threatening the Mars One project, the mission's purpose is called into question. Is this all worth it?

The X-Files Origins: Devil's Advocate will explore the teen years of Dana Scully, the beloved character depicted in the cult-favorite TV show The X-Files. Her story is set in the spring of 1979, when serial murder, the occult, and government conspiracy were highlighted in the news. The book will follow Scully as she experiences life-changing events that set her on the path to becoming an FBI agent.

Fifteen-year-old Dana Scully has bigger problems than being the new girl in school. Dana has always had dreams. Sometimes they've even come true. Until now, she tried to write this off as coincidence. But ever since her father's military career moved the family across the country to Craiger, Maryland, the dreams have been more like visions. Vivid, disturbing, and haunted by a shadowy figure who may be an angel . . . or the devil.

When a classmate who recently died in a car accident appears before Dana, her wounds look anything but accidental. Compelled by a force she can't name, Dana uncovers even more suspicious deaths?and must face the danger-ous knowledge that evil is real.

But when a betrayal of faith makes her question everything, she begins to put her faith in being a skeptic.