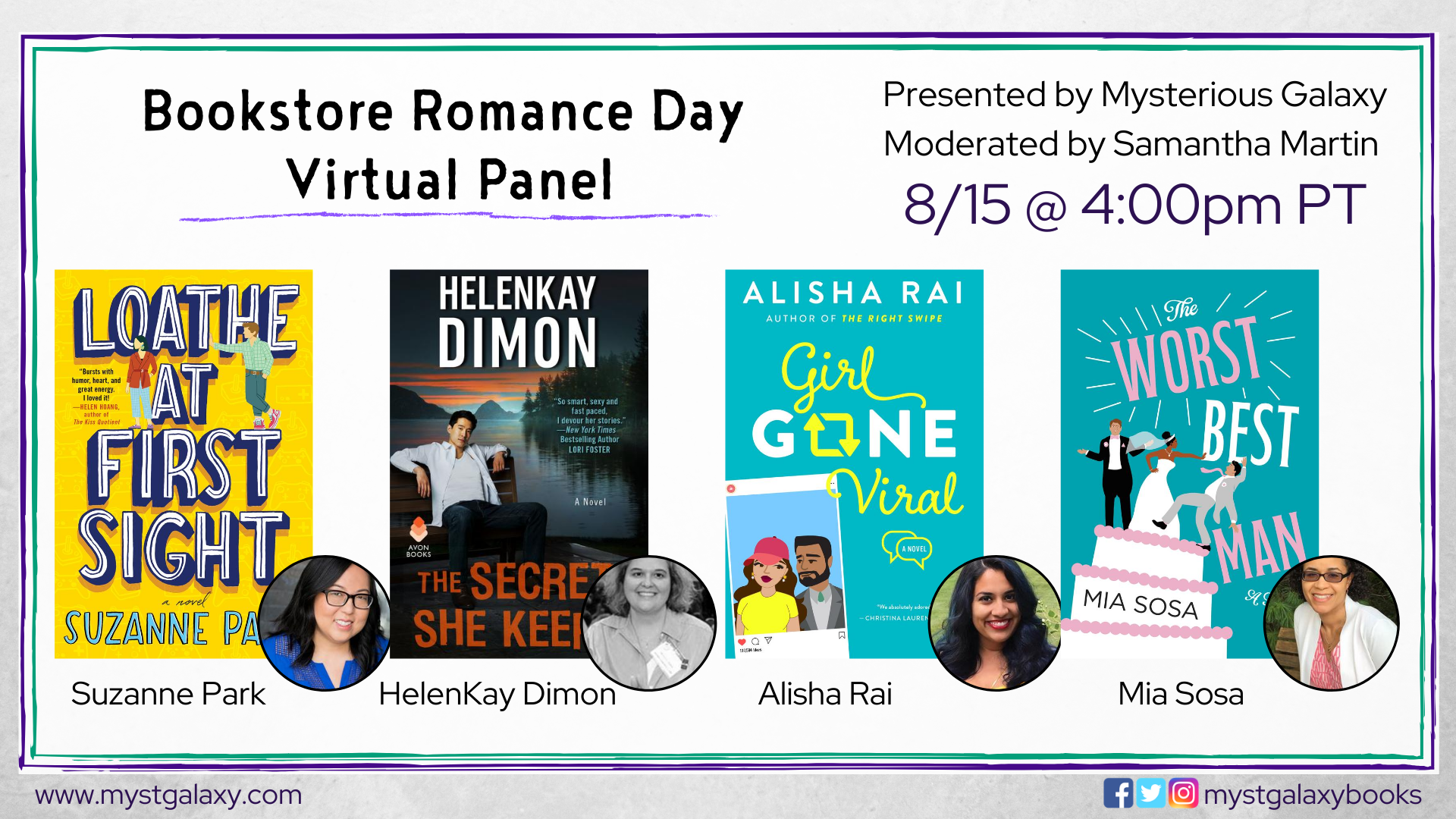 Event date:
Saturday, August 15, 2020 - 4:00pm
Celebrate Bookstore Romance Day with us and these amazing romance authors and guest moderator Samantha Martin of Frolic Media!
How to join our Livestream
Our livestreams are hosted on Crowdcast! To view and register for the event click here.
Also check out the Bookstore Romance Day YouTube channel for fun videos all day!
On Sunday, August 16th join a Facebook watch party of The Princess Diaries with guest appearance by Meg Cabot!
Special Giveaways!
Scholastic Gift Basket Giveaway! (Win a basket full of books, ARCs, and more)
About the Authors
Suzanne Park is a Korean-American writer who was born and raised in Tennessee. As a comedian, she was selected to appear on BET's Coming to the Stage. Suzanne was also the winner of the Seattle Sierra Mist Comedy Competition and a semi-finalist in NBC's Stand Up For Diversity showcase in San Francisco. Suzanne graduated from Columbia University and received an MBA from UCLA. She currently resides in Los Angeles with her husband, female offspring, and a sneaky rat that creeps around on her back patio. In her spare time, she procrastinates. She is also the author of a YA romantic comedy novel The Perfect Escape.
HelenKay Dimon spent the years before becoming a romance author as a . . . divorce attorney. Not the usual transition, she knows. Good news is she now writes full time and is much happier. Her award-winning books have been showcased in numerous venues, including the Washington Post, and her books have twice been named “Red-Hot Reads” in Cosmopolitan magazine. She is an RT Reviewer’s Choice Award winner and RITA® Award winner in romantic suspense.
Alisha Rai pens award-winning contemporary romances, and her novels have been named Best Books of the Year by Washington Post, NPR, Entertainment Weekly, Kirkus, and Cosmopolitan Magazine. When she’s not writing, Alisha is traveling or tweeting.
Mia Sosa writes funny, flirty, and moderately steamy contemporary romances that celebrate our multicultural world. A graduate of the University of Pennsylvania and Yale Law School, Mia practiced First Amendment and media law in the nation’s capital for ten years before trading her suits for loungewear (read: sweatpants). Born and raised in East Harlem, New York, she now lives in Maryland with her college sweetheart, their two bookaholic daughters, and one dog that rules them all.

The Secret She Keeps: A Novel (Mass Market)