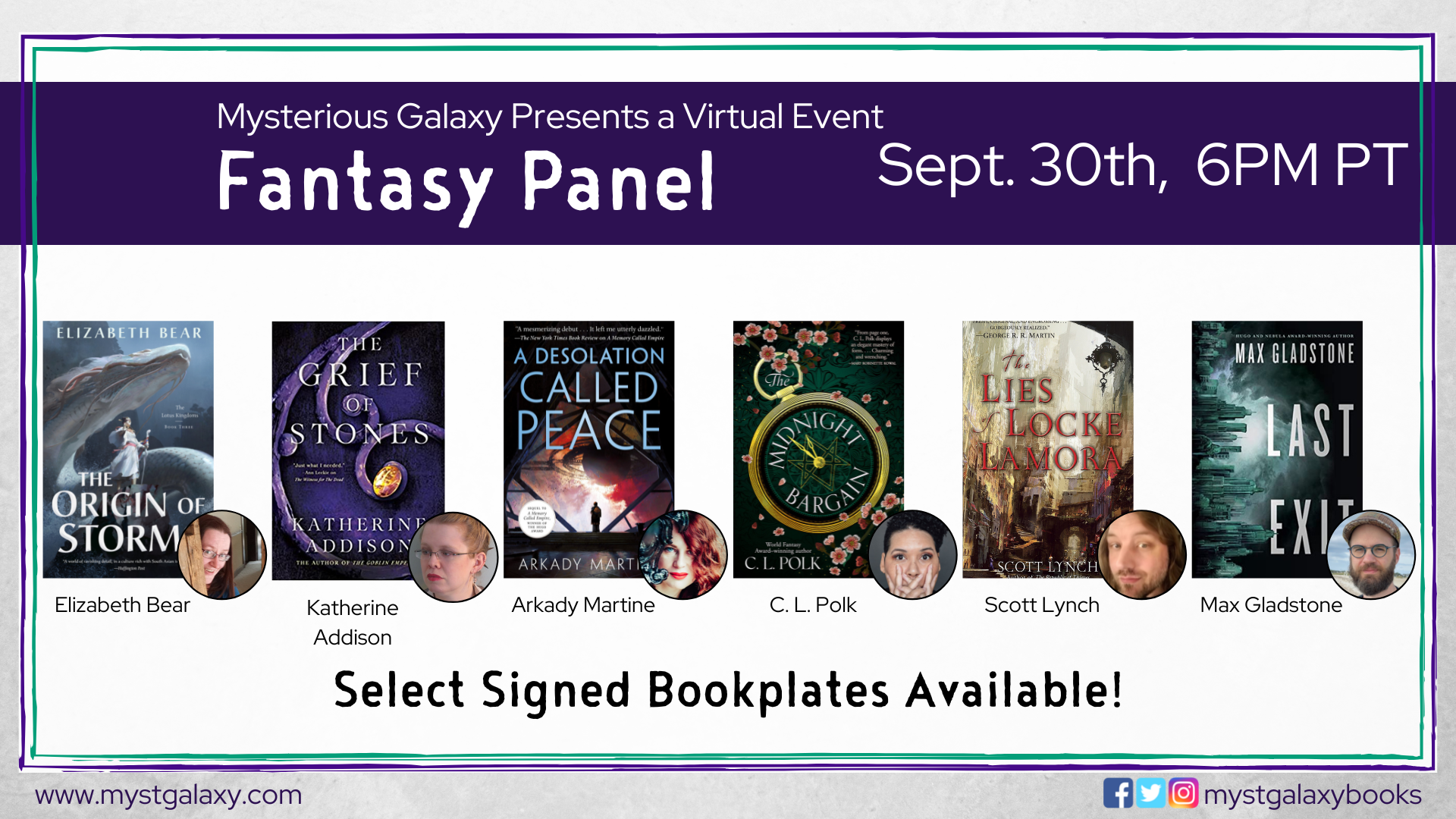 God-emperors and space capitalists got you down? The discourse surrounding speculative fiction, and in particular fantasy and space opera, often pushes the idea that SF is inherently regressive. Join our panel of award-winning and best-selling authors as they interrogate the assumption that the future necessarily has to look anything like the past.

About the Authors
ELIZABETH BEAR was born on the same day as Frodo and Bilbo Baggins, but in a different year. She is the Hugo, Sturgeon, and Astounding Award-Winning Author of over thirty novels and more than a hundred short stories. She lives in Massachusetts.
SARAH MONETTE and KATHERINE ADDISON are the same person. She has published more than sixty short stories, eight solo novels, and four collaborations with her friend Elizabeth Bear. Her most recent novel is THE GRIEF OF STONES (Tor Books, 2022). THE GOBLIN EMPEROR (Tor Books, 2014) won the 2015 Locus Award for Best Fantasy Novel and was a finalist for the Hugo, the Nebula, and the World Fantasy Award. THE ANGEL OF THE CROWS (Tor Books, 2020) was a finalist for the Locus Award. THE WITNESS FOR THE DEAD (Tor Books, 2021) was a finalist for the Locus Award and shortlisted for the Mythopoeic Fantasy Award. She is adjunct faculty for Ashland University's low-residency MFA program. You can find her on Patreon as pennyvixen. She lives, with spouse, cats, and books, somewhere near Madison, Wisconsin.

ARKADY MARTINE (she/her) is a speculative fiction writer and, as Dr. AnnaLinden Weller, a historian of the Byzantine Empire and a city planner. Under both names she writes about border politics, narrative and rhetoric, risk communication, and the edges of the world. She is currently a policy advisor for the New Mexico Energy, Minerals, and Natural Resources Department, where she works on climate change mitigation, energy grid modernization, and resiliency planning. Her debut novel, A MEMORY CALLED EMPIRE, won the 2020 Hugo Award for Best Novel, and its sequel, A DESOLATION CALLED PEACE, won the 2022 Locus Award for Science Fiction Novel. Arkady grew up in New York City, and after some time in Turkey, Canada, Sweden, and Baltimore, lives in New Mexico with her wife, the author Vivian Shaw.

C. L. POLK (they/them/she/her) wrote the Hugo-nominated Kingston Cycle, beginning with the WFA winning novel WITCHMARK. Their Subjective Chaos Kind of Award winning novel THE MIDNIGHT BARGAIN was a Canada Reads, Nebula, Locus, Ignyte, and World Fantasy Award finalist. They have been a film extra, a costermonger, and identified lepidoptera before settling down to write fantasy novels. Mx. Polk lives in Calgary, on the territories of the Blackfoot Confederacy, the Tsuut’ina, the Îyâxe Nakoda Nations, and the Métis Nation (Region 3).

SCOTT LYNCH was born in St. Paul, Minnesota in 1978, the first of three brothers. Early in life he worked as a dishwasher, a waiter, a graphic designer, an office manager, a cook, and a game supplement self-publisher before accidentally selling his first novel, THE LIES OF LOCKE LAMORA, in 2004. From 2005 to 2016 Scott also served as a paid-on-call firefighter in Wisconsin. Scott currently lives in Massachusetts with his wife, award-winning SF/F novelist Elizabeth Bear, along with four cats (Duncan, Gurney, Molly, and Fafhrd) and a moderately ridiculous horse (an Icelandic gelding named Ormr).

Hugo-, Nebula-, and Locus Award winning author MAX GLADSTONE’s works include LAST EXIT, EMPRESS OF FOREVER, the Craft Sequence of fantasy novels and games, and, with Amal El-Mohtar, the internationally bestselling THIS IS HOW YOU LOSE THE TIME WAR. His interactive projects include the XYZZY-nominated Choice of the Deathless and Deathless: The City’s Thirst, which take place in the world of the Craft Sequence. Gladstone created the Serial Box series Bookburners, and the interactive television series WIZARD SCHOOL DROPOUT. He has wrecked a bicycle in Angkor Wat, sung at Carnegie Hall, and been thrown from a horse in Mongolia.

The Origin of Storms: The Lotus Kingdoms, Book Three (Hardcover)

The Stone in the Skull: The Lotus Kingdoms, Book One (Paperback)

The Grief of Stones (The Cemeteries of Amalo #2) (Hardcover)

The Witness for the Dead (The Cemeteries of Amalo #1) (Paperback)

Even Though I Knew the End (Hardcover)

This Is How You Lose the Time War (Paperback)