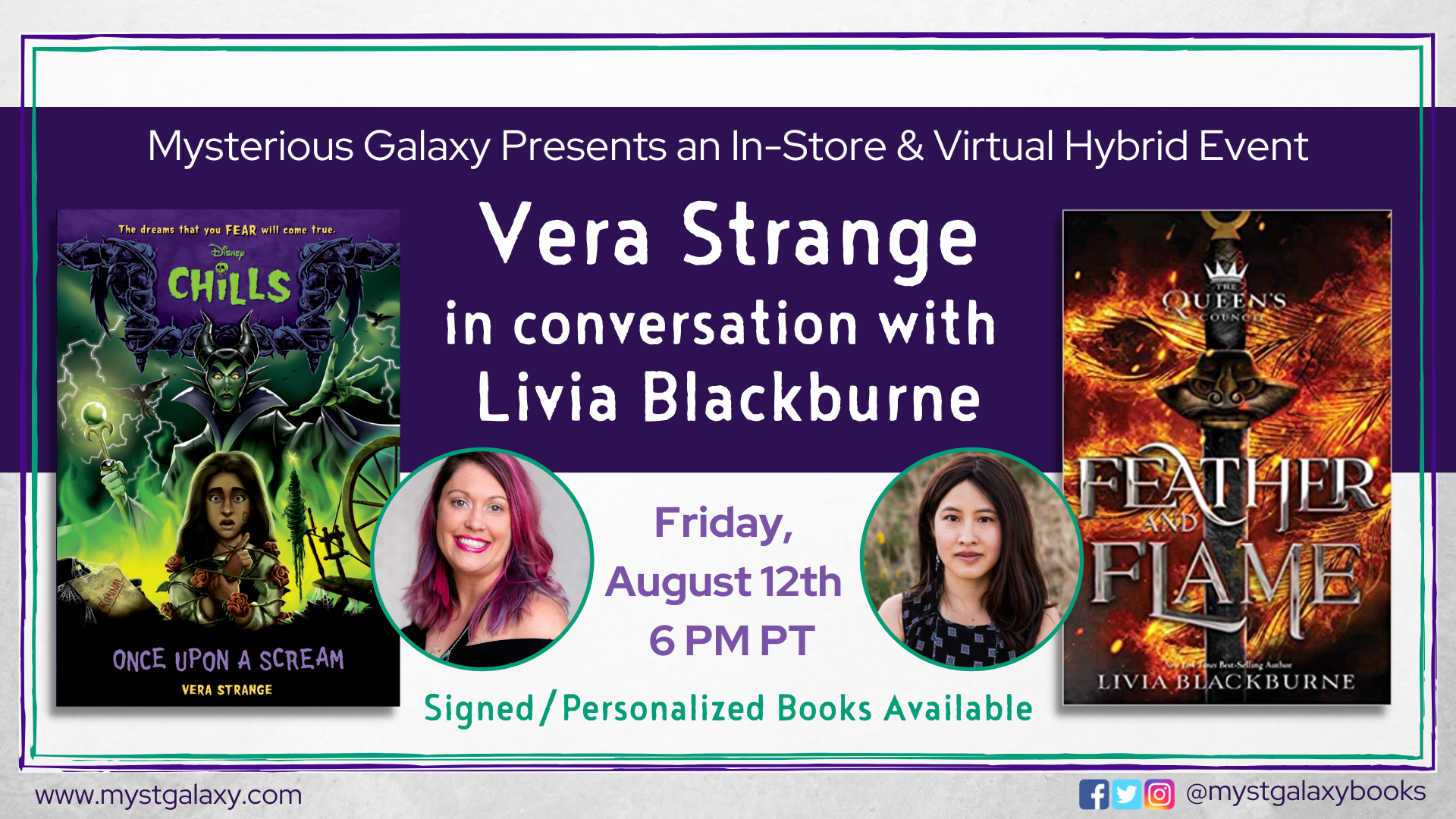 This is an IN-STORE EVENT that will also be broadcasted live through Crowdcast for those unable to attend in person. This event will consist of a 30 minute discussion with Vera Strange and Livia, followed by the book signing.

About the Authors
JENNIFER BRODY / VERA STRANGE is the author of the popular Disney Chills series, The 13th Continuum trilogy, and the Stoker Finalist SPECTRE DEEP 6, prompting Forbes to call Brody “a star in the graphic novel world.” She is the co-author of STAR WARS: STORIES OF JEDI & SITH, where she penned the Darth Vader story. She’s a graduate of Harvard University, a film/TV producer and writer, and a creative writing instructor. She began her career in Hollywood working for A-List directors and movie studios. More info: www.jenniferbrody.com

NEW YORK TIMES bestselling author LIVIA BLACKBURNE wrote her first novel while researching the neuroscience of reading at the Massachusetts Institute of Technology.  Since then, she’s switched to full time writing, which also involves getting into people’s heads but without the help of a three tesla MRI scanner.  She is the author of MIDNIGHT THIEF (An Indies Introduce New Voices selection) ROSEMARKED (A YALSA Teens Top Ten nominee), and FEATHER AND FLAME, as well as the picture book I DREAM OF POPO, which received three starred reviews and was on numerous Best of Year lists.

About ONCE UPON A SCREAM
Dawn misses the big city. Torn away from her favorite place in the world and shipped off to live with her two cooky aunts in the countryside, Dawn is miserable in her new life. While her parents see this as a chance for her to be away from the bad influences that kept getting her into trouble, Dawn sees her new dumpy town of Moorsland as a sticky and smelly prison with way too many bugs. But no one seems to care what Dawn wants, so she's stuck helping her aunts in their dusty antique shop and finishing the year out in a new school filled with mean girls.

One day while cleaning some of the junk in the shop, Dawn accidentally pricks her finger on a broken spinning wheel, awakening none other than Maleficent. In exchange for keeping the spinning wheel safe, Maleficent will make sure Dawn's remaining time in Moorsland is smooth sailing. But as kids from her class start coming down with a mysterious sleeping sickness, Dawn starts to realize there is more to this deal than she imagined. And it's going to take more than just a dream for Dawn to take on the Mistress of All Evil.

About FEATHER AND FLAME
The war is over. Now a renowned hero, Mulan spends her days in her home village, training a militia of female warriors. The peace is a welcome one, and she knows it must be protected.

When Shang arrives with an invitation to the Imperial City, Mulan’s relatively peaceful life is upended once more. The aging emperor decrees that Mulan will be his heir to the throne. Such unimagined power and responsibility terrifies her, but who can say no to the Emperor?

As Mulan ascends into the halls of power, it becomes clear that not everyone is on her side. Her ministers undermine her, and the Huns sense a weakness in the throne. When hints of treachery appear even amongst those she considers friends, Mulan has no idea whom she can trust.

But the discovery of a mysterious, ancient magic helps Mulan uncover her true destiny. With renewed strength and the wisdom of those that came before her, Mulan will own her power, save her country, and prove once again that, crown or helmet, she was always meant to lead. This fierce reimagining of the girl who became a warrior blends fairy-tale lore and real history with a Disney twist.

Once Upon a Scream (Disney Chills) (Paperback)

Fiends on the Other Side (Disney Chills, Book Two) (Paperback)

Part of Your Nightmare (Disney Chills, Book One) (Paperback)

Stories of Jedi and Sith (Hardcover)

I Dream of Popo (Hardcover)