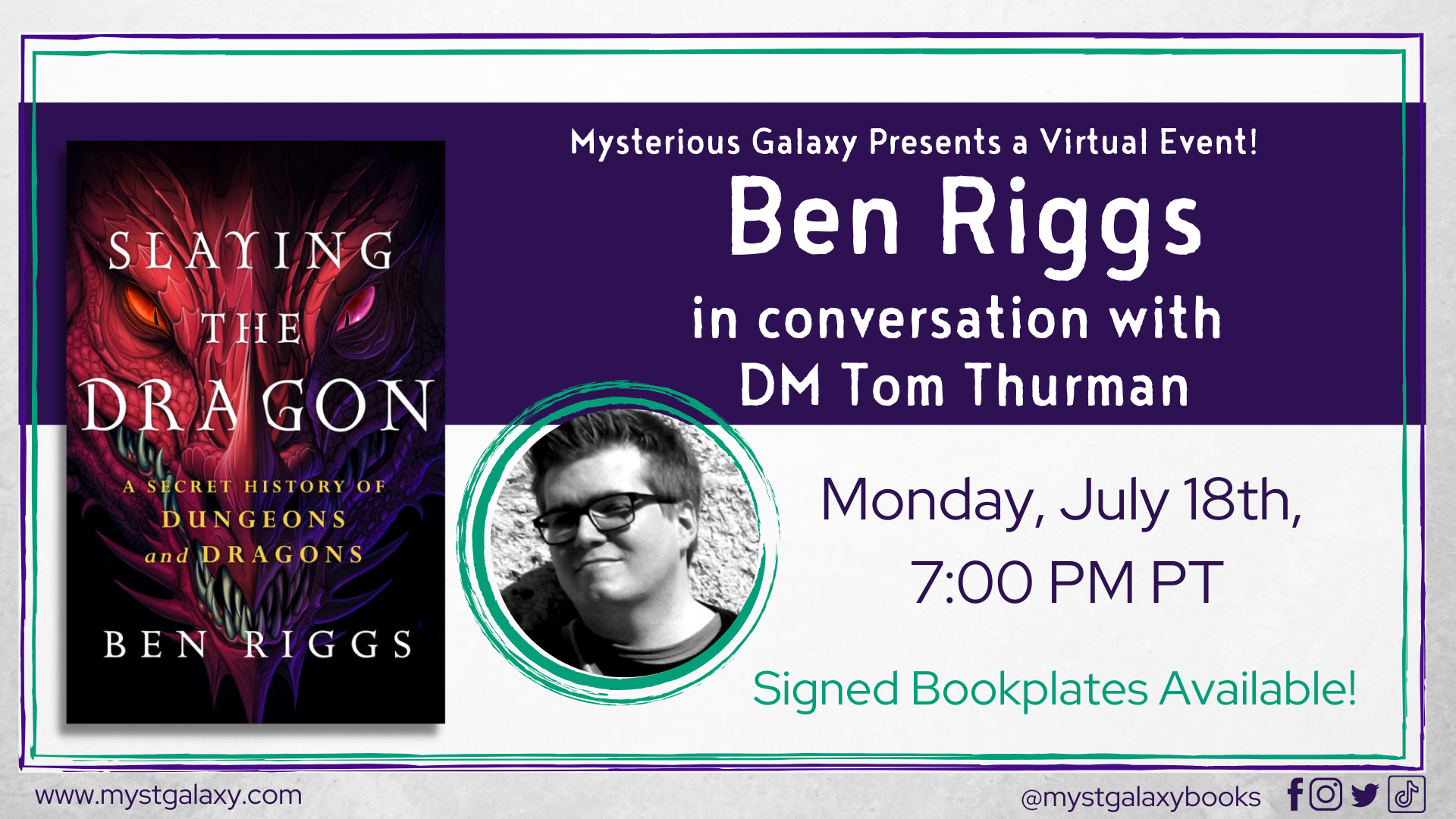 Event date:
Monday, July 18, 2022 - 7:00pm
Ben Riggs discussing SLAYING THE DRAGON - A Virtual Event
Mysterious Galaxy's virtual events are hosted on Crowdcast. Click here to register for the event and here to view our virtual code of conduct. Accessibility: Real-time captioning for all Crowdcast events is available via Google Chrome. For enabling captions, please follow this guide. More info here.
How to Order a Signed Bookplate by Ben Riggs

*A bookplate is essentially a signed sticker that is separate from the book itself, meaning that the book is not directly signed.  Once you receive your bookplate, you are free to affix it to your book, or keep it separate.*

About the Author
BEN RIGGS is a writer, teacher, and podcaster. He traveled the world teaching in his 20s. During his journeys, he tutored a princess, saw both the Sahara and Mt. Fuji at dawn, and discovered his wife and fellow traveler, Tara. He has settled down in his hometown of Milwaukee, Wisconsin, where he teaches English and history, and he and Tara have a son, Simon. Ben’s RPG podcast, Plot Points, has been running for the last decade, and his work has appeared on NPR and Geek & Sundry. SLAYING THE DRAGON is his first book.
About SLAYING THE DRAGON

Co-created by wargame enthusiasts Gary Gygax and Dave Arneson, the original DUNGEONS & DRAGONS role-playing game released by TSR (Tactical Studies Rules) in 1974 created a radical new medium: the role-playing game. For the next two decades, TSR rocketed to success, producing multiple editions of D&D, numerous settings for the game, magazines, video games, NEW YORK TIMES bestselling novels by Margaret Weis, Tracy Hickman, and R. A. Salvatore, and even a TV show! But by 1997, a series of ruinous choices and failed projects brought TSR to the edge of doom—only to be saved by their fiercest competitor, Wizards of the Coast, the company behind the collectible card game MAGIC: THE GATHERING.

Unearthed from Ben Riggs’s own adventurous campaign of in-depth research, interviews with major players, and acquisitions of secret documents, SLAYING THE DRAGON reveals the true story of the rise and fall of TSR. Go behind the scenes of their Lake Geneva headquarters where innovative artists and writers redefined the sword and sorcery genre, managers and executives sabotaged their own success by alienating their top talent, ignoring their customer fanbase, accruing a mountain of debt, and agreeing to deals which, by the end, made them into a publishing company unable to publish so much as a postcard.

As epic and fantastic as the adventures TSR published, SLAYING THE DRAGON is the legendary tale of the rise and fall of the company that created the role-playing game world.

Slaying the Dragon: A Secret History of Dungeons & Dragons (Hardcover)