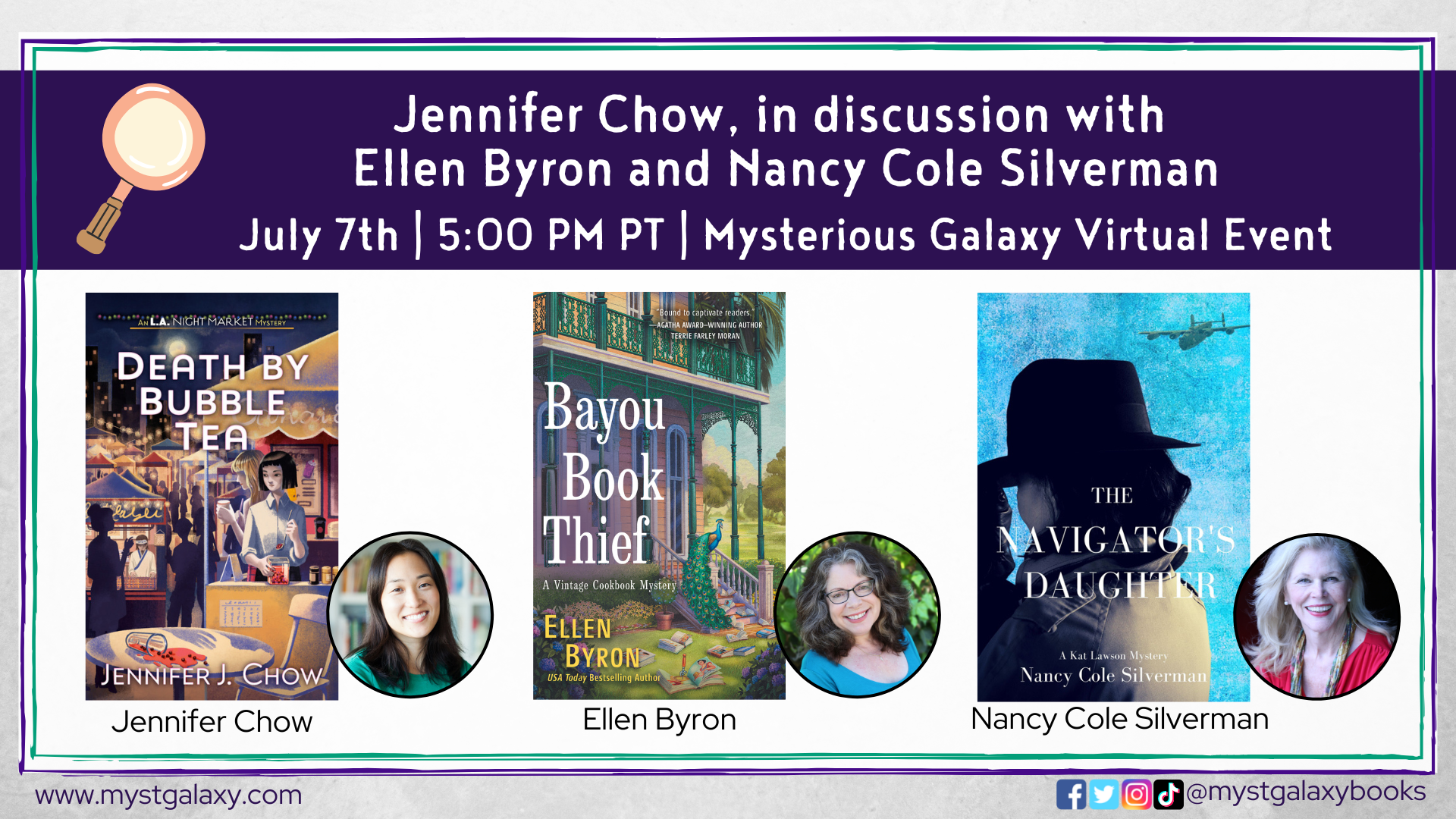 How to Order a Signed Bookplate from Jennifer J. Chow, Ellen Byron, and/or Nancy Cole Silverman:

About the Authors
JENNIFER J. CHOW writes cozies with heart, humor, and heritage. She is the twice-nominated Lefty Award author of the Sassy Cat Mysteries. The first in the Sassy Cat series, MIMI LEE GETS A CLUE, was selected as an OverDrive Recommended Read, a PopSugar Best Summer Beach Read, and one of BuzzFeed’s Top 5 Books by AAPI authors. Her new series is the L.A. Night Market Mysteries, and the first book, DEATH BY BUBBLE TEA, released on July 5. She currently serves as Vice President on the national board of Sisters in Crime and is an active member of Crime Writers of Color and Mystery Writers of America. Connect with her online at JenniferJChow.com.

NANCY COLE SILVERMAN spent nearly twenty-five in Los Angeles Talk Radio, beginning her career on the talent side as one of the first female voices on the air. Later, on the business side, she retired as one of two female general managers in the nation’s second-largest radio market. After a successful career in the radio industry, Silverman turned to write fiction. Her crime-focused novels and short stories have attracted readers throughout America. Her Carol Childs Mysteries series features a single mom whose day job as a reporter at a busy Los Angeles radio station often leads to long nights as a crime-solver. While her Misty Dawn Series is centered on an aging Hollywood Psychic to the Stars, who supplements her day-to-day activities as a consultant to LAPD and the FBI. Silverman’s newest work, THE NAVIGATOR’S DAUGHTER, is scheduled for release June 2022.  Silverman lives in Los Angeles with her husband and a thoroughly pampered standard poodle.

About DEATH BY BUBBLE TEA
When Yale Yee discovers her cousin Celine is visiting from Hong Kong, she is obliged to play tour guide to a relative she hasn’t seen in twenty years. Not only that, but her father thinks it’s a wonderful idea for them to bond by running a food stall together at the Eastwood Village Night Market. Yale hasn’t cooked in years, and she hardly considers Celine’s career as a social media influencer as adequate experience, but because she’s just lost her job at her local bookstore, she feels she has no choice.

Yale and Celine serve small dishes and refreshing drinks, and while business is slow, it eventually picks up thanks to Celine’s surprisingly useful marketing ideas. They’re quite shocked that their bubble tea, in particular, is a hit—literally—when one of their customers turns up dead. Yale and Celine are prime suspects due to the gold flakes that Celine added to the sweet drink as a garnish. Though the two cousins are polar opposites in every way, they must work together to find out what really happened to the victim or the only thing they’ll be serving is time.

Mimi Lee Gets a Clue (A Sassy Cat Mystery #1) (Paperback)

Murder in the Bayou Boneyard (A Cajun Country Mystery #6) (Hardcover)

Without a Doubt (Paperback)

Beyond a Doubt (Paperback)

The House on Hallowed Ground (Paperback)

The House That Vanity Built (Paperback)