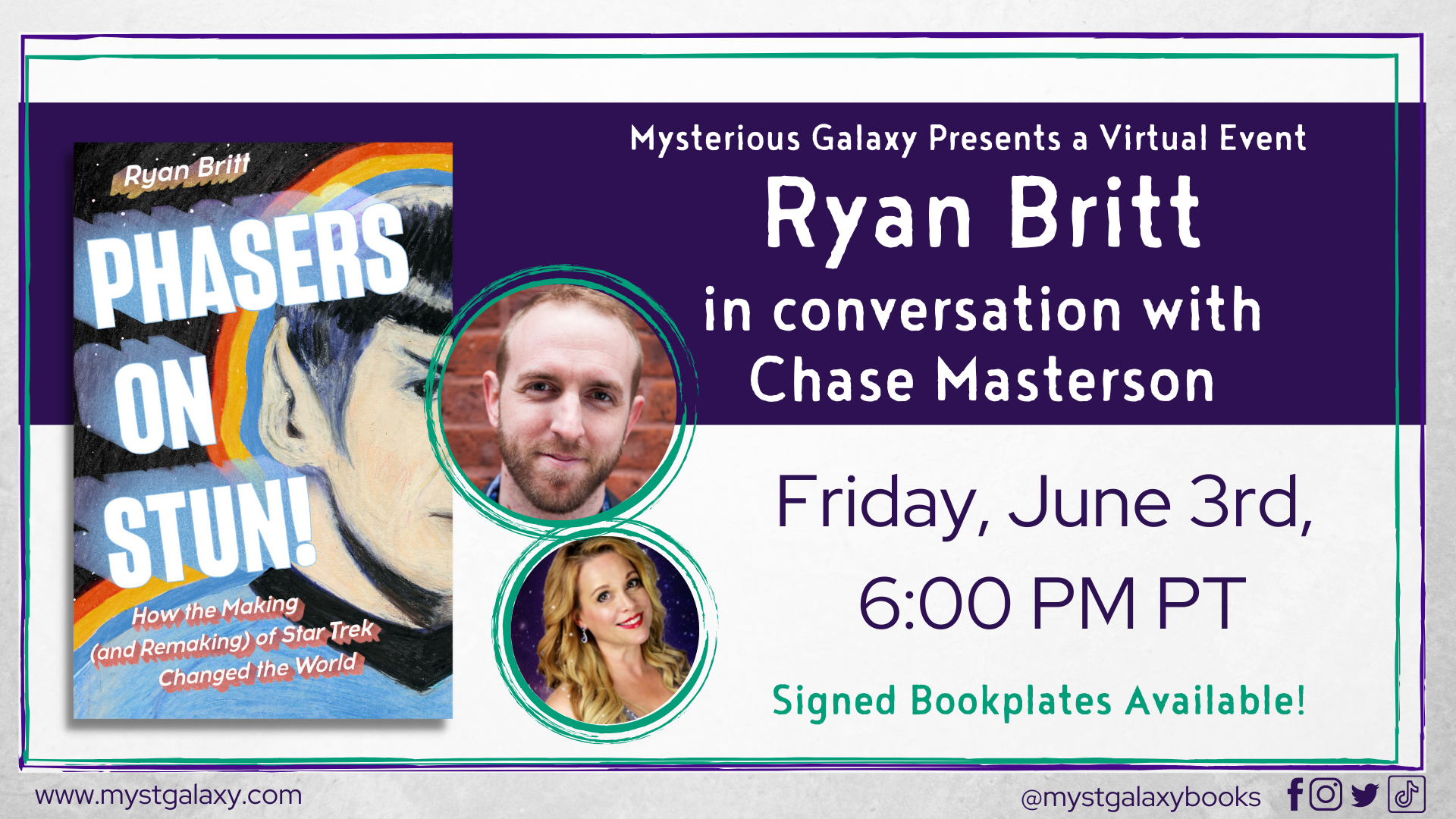 Event date:
Friday, June 3, 2022 - 6:00pm
Ryan Britt in discussion with Chase Masterson
A Virtual Event!
Mysterious Galaxy's virtual events are hosted on Crowdcast. Click here to register for the event and here to view our virtual code of conduct. Accessibility: Real-time captioning for all Crowdcast events is available via Google Chrome. For enabling captions, please follow this guide. More info here.
How to Order a Signed Bookplate* by Ryan Britt

*A bookplate is essentially a signed sticker that is separate from the book itself, meaning that the book is not directly signed.  Once you receive your bookplate, you are free to affix it to your book, or wherever you see fit to do so.

About Ryan Britt
RYAN BRITT is the author of LUKE SKYWALKER CAN’T READ AND OTHER GEEKY TRUTHS (Plume 2015), and writes about Star Trek weekly for DEN OF GEEK! and INVERSE, and has covered Star Trek for SYFY WIRE, TOR.COM, and STAR TREK.COM, extensively. Lev Grossman has said about him, “Ryan Britt is one of nerd culture’s most brilliant and most essential commentators.” Ryan's Non-Star Trek writing of his has appeared in VULTURE, VICE, CNN STYLE, and THE NEW YORK TIMES. He’s also the senior entertainment editor at Fatherly.
About Chase Masterson
CHASE MASTERSON is known to fans worldwide as Leeta on STAR TREK: DEEP SPACE NINE and the title role in the Doctor Who Big Finish audio spinoff, VIENNA. She has Guest-starred on THE FLASH and most recently recurred on the CW’s PANDORA.

Chase’s TV work includes starring opposite Bruce Campbell in TERMINAL INVASION for SyFy, guest starring in the Emmy-winning episode of ER, hosting SCI-FI ENTERTAINMENT, hosting SUNDAY NIGHT AT THE MOVIES with Ryan Seacrest, and playing opposite Jerry O’Connell in SLIDERS. Her varied career ranges from her first job, working with Mel Brooks in ROBIN HOOD: MEN IN TIGHTS, to hosting STARMUS, featuring Dr. Brian May and Peter Gabriel.

Chase is the Founder and CEO of the Pop Culture Hero Coalition, the 1st ever non-profit organization to use iconic stories from TV and film to teach mental health tools, including heroism over bullying, racism, misogyny, LGBTQI-bullying, cyberbullying, and other forms of injustice. Their Heroic Journey program is used nationwide by YMCA of the USA. Chase has spoken about the Coalition’s work at the United Nations, Google, and TEDxVienna, and she was honored as Artist-In-Residence at the Vienna MuseumsQuartier in Austria.

About PHASERS ON STUN!
For over five decades, the heart of Star Trek’s pro-science, anti-racist, and inclusive messaging has been its willingness to take big risks. Across thirteen feature films, and twelve TV series—including five shows currently airing or in production—the brilliance of Star Trek is in its endless ability to be rethought, rebooted, and remade.

Author and Star Trek expert Ryan Britt charts an approachable and entertaining course through Star Trek history; from its groundbreaking origins amid the tumultuous 1960s, to its influence on diversifying the space program, to its contemporary history-making turns with LGBTQ+ representation, this book illuminates not just the behind-the-scenes stories that shaped the franchise but the larger meaning of the Final Frontier.

Featuring over 100 exclusive interviews with actors and writers across all the generations, including Walter Koenig, LeVar Burton, Dorothy Fontana, Brent Spiner, Ronald D. Moore, Jeri Ryan, and many more, Britt gets the inside story on all things Trek, like Spock’s evolution from red devil to the personification of logical empathy, the near failure to launch of The Next Generation in 1987, and how Trekkie outrage has threatened to destroy the franchise more than once. The book also dives deep with creators like Michael Chabon (co-creator of Star Trek: Picard) and Nicholas Meyer (director, The Wrath of Khan). These interviews extend to the bleeding edge of contemporary Star Trek, from Discovery to Picard to Lower Decks, and even the upcoming highly anticipated 2022 series, Strange New Worlds.

For fans who know every detail of each Enterprise bridge, to a reader who has never seen a single minute of any Star Trek, this book aims to entertain, inform, and energize. Through humor, insight, archival research, and unique access, this journey through the Star Trek universe isn’t just about its past but a definitive look at its future.

Phasers on Stun!: How the Making (and Remaking) of Star Trek Changed the World (Hardcover)

By Janina Scarlet, Chase Masterson (Foreword by), Jill A. Stoddard (Afterword by)
$18.95