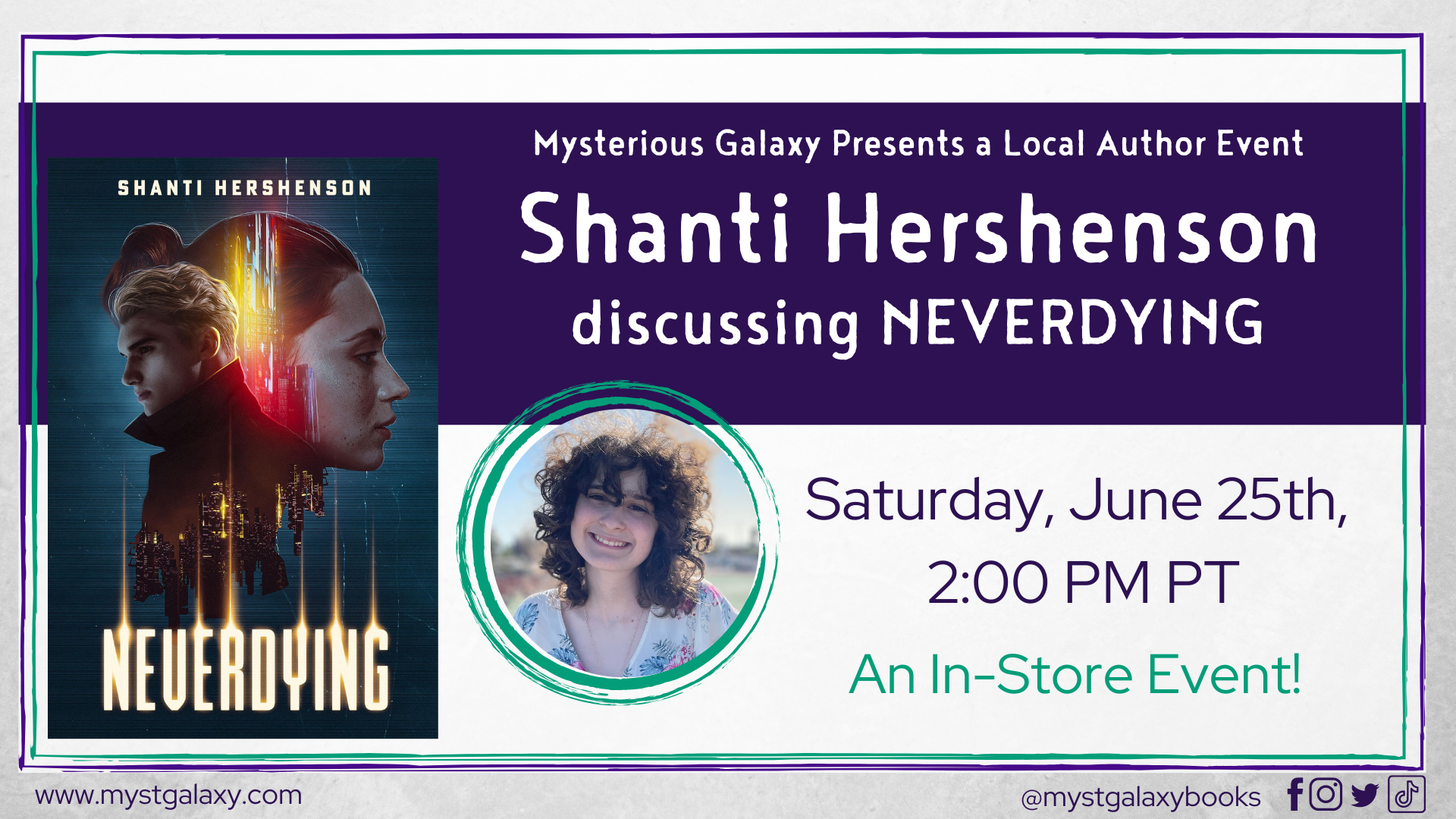 Event date:
Saturday, June 25, 2022 - 2:00pm
Shanti Hershenson signing NEVERDYING
A Local Author In-Store Event!
This event is free and seating is first come, first serve. To get a book signed during one of our events, a copy of the event book must be purchased through Mysterious Galaxy. Event purchases through Mysterious Galaxy not only keeps our bookstore doors open, but also makes author signings possible.
How to Order a Signed/Personalized Book if you're unable to attend the event
About the Author
SHANTI HERSHENSON’s first two novellas were published when she was in the sixth grade, although her writing journey started long before then. Ever since she could hold a pencil, marker, or crayon, she was creating stories. They started from pictures, mere scribbles, and eventually, turned into captivating tales. She lives in Southern California with her parents, sister, and three cats who have inspired large portions of her novels. As of this time, she has written seventeen books, and has published ten, though that number increases every one to two months.

If you could live forever, would it be a gift… or a disease?

A doctor created a genetic mutation meant as a gift to society—to those at random in future generations who were born with it: Immortality. But the risk of overpopulation and questions rising about the imbalance of only few being Immortals brings the ruthless President Wilde to a different stand—a facade of peace and equality whereas Immortals are executed daily—thus creating the ruination of the United States… and the world soon after.

Scarlett Caldwell is a girl of many mysteries—but along with that, she’s an Immortal. Having run away from a very young age and forced to forget the part of her identity that could get her assassinated, she turns to very few of her friends and spends the majority of her days hiding in the Immortals Legion, a compound for Immortals in hiding. But times are changing and tensions are only growing—Scarlett knows she can’t stay hidden forever. When she encounters an unfairly attractive Exterminator who, despite seeming rigid, has an amusing thing or two to say, she is left absolutely livid. But beyond that, beyond all the parts of him that she hates, there’s a secret. And Scarlett will do anything to unravel it.

Cain Hawkins is an Exterminator, a member of the country’s new authority specially trained to hunt down and exterminate the remaining Immortals. He truly believes that being an Exterminator is what he is meant for—despite what he may or may not know. And when a skirmish with an Immortal on the street leaves him questioning every last bit of himself, he will have to rise to stand with his president and failing country, or run from everything he was conditioned for. Besides, Cain has a secret: He is an Immortal too.

Their first encounter is far from the last, for an opportunity rises for the two to (unwillingly) work together. Already, they are left with a spark—a spark of hope for a future where Immortals are not prosecuted. And no matter if Cain sees the spark or not, the question still remains: How long will it be until a single spark ignites a fire?