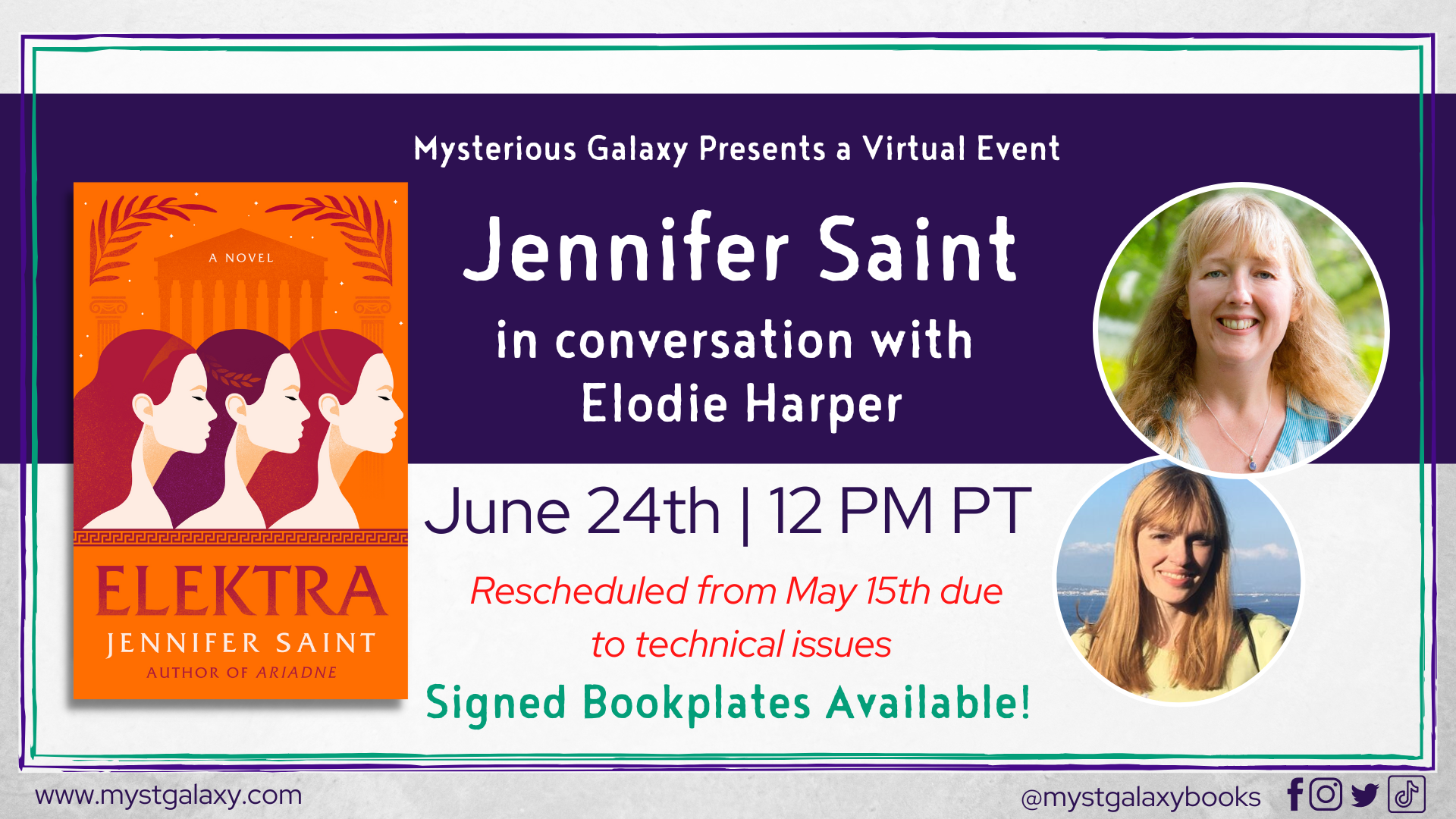 Event date:
Friday, June 24, 2022 - 12:00pm
Jennifer Saint in discussion with Elodie Harper - A Virtual Event
Rescheduled from previous date of May 15th
Mysterious Galaxy's virtual events are hosted on Crowdcast. Click here to register for the event and here to view our virtual code of conduct. Accessibility: Real-time captioning for all Crowdcast events is available via Google Chrome. For enabling captions, please follow this guide. More info here.
How to Order a Signed Bookplate from Jennifer Saint
*A bookplate is essentially a signed sticker that is separate from the book itself, meaning that the book is not directly signed.  Once you receive your bookplate, you are free to affix it to your book, or wherever you see fit to do so.*
About the Authors
Due to a lifelong fascination with Ancient Greek mythology, JENNIFER SAINT read Classical Studies at King’s College, London. She spent the next thirteen years as an English teacher, sharing a love of literature and creative writing with her students. She is the internationally bestselling author of ELEKTRA and ARIADNE.
ELODIE HARPER is a reporter and presenter at ITV News Anglia.  She's worked as a journalist for the past decade, including for Channel 4 News, ITN and BBC radio.  Her job has seen her join one of the most secretive wings of the Church of Scientology and cover the far-right hip hop scene in Berlin, as well as crime reporting in Norfolk, where her first two novels are set.

In 2016, her story “Wild Swimming” won a short story competition judged by Stephen King.  It was published later that year by Cemetery Dance in the anthology SIX SCARY STORIES: SELECTED AND INTRODUCED BY STEPHEN KING. Elodie's debut novel THE BINDING SONG was published by Hodder & Stoughton in 2017 and was followed by THE DEATH KNOCK in July 2018.

Elodie’s critically acclaimed historical novel THE WOLF DEN, is the first in a new trilogy which follows the lives of a group of young women who work in a Pompeii brothel.

About ELEKTRA
Three women, tangled in an ancient curse.

When Clytemnestra marries Agamemnon, she ignores the insidious whispers about his family line, the House of Atreus. But when, on the eve of the Trojan War, Agamemnon betrays Clytemnestra in the most unimaginable way, she must confront the curse that has long ravaged their family.

In Troy, Princess Cassandra has the gift of prophecy, but carries a curse of her own: no one will ever believe what she sees. When she is shown what will happen to her beloved city when Agamemnon and his army arrives, she is powerless to stop the tragedy from unfolding.

Elektra, Clytemnestra and Agamemnon’s youngest daughter, wants only for her beloved father to return home from war. But can she escape her family’s bloody history, or is her destiny bound by violence, too?