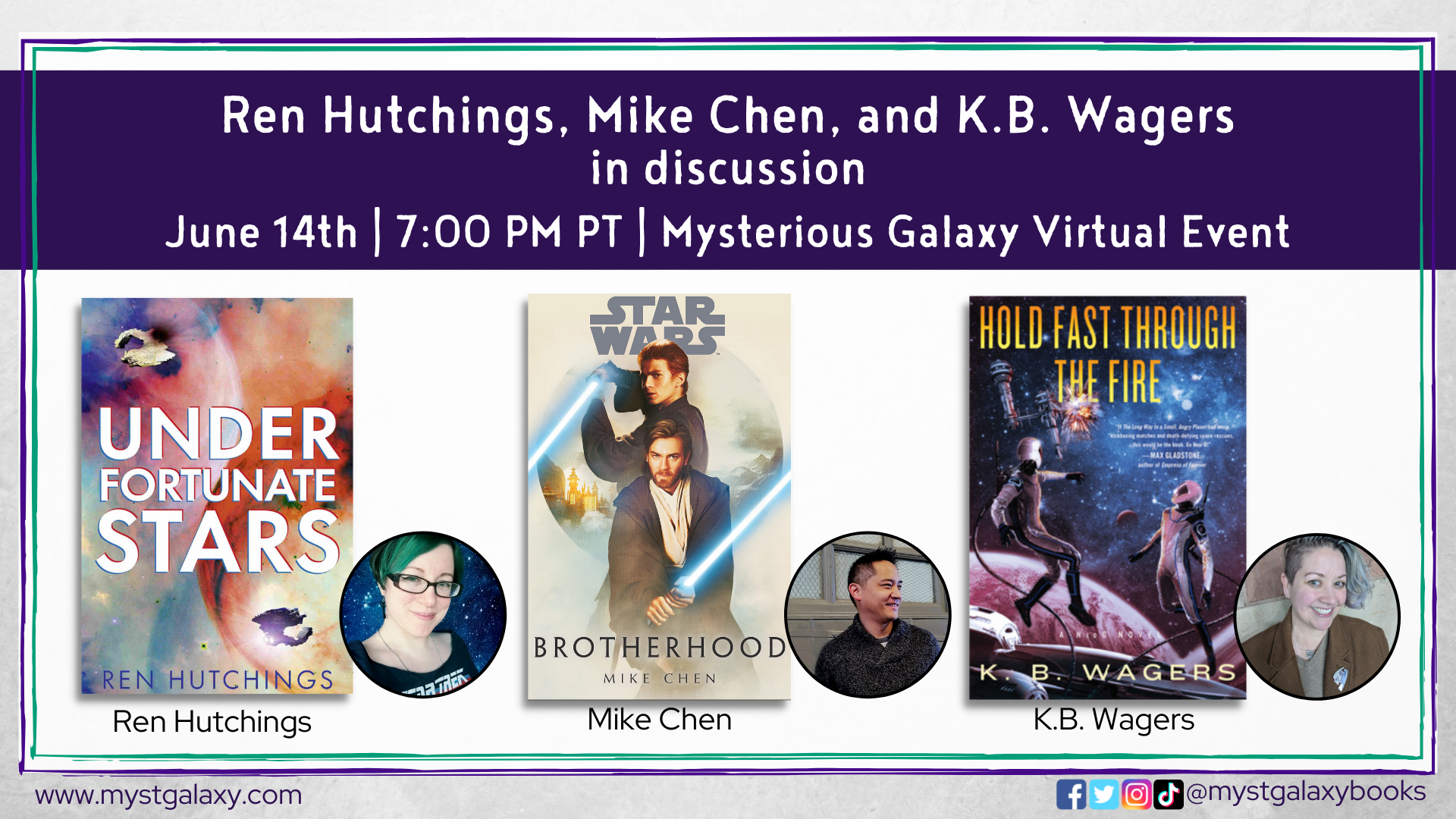 Event date:
Tuesday, June 14, 2022 - 7:00pm
Ren Hutchings, Mike Chen and K.B. Wagers in discussion - A Virtual Event
Mysterious Galaxy's virtual events are hosted on Crowdcast. Click here to register for the event and here to view our virtual code of conduct. Accessibility: Real-time captioning for all Crowdcast events is available via Google Chrome. For enabling captions, please follow this guide. More info here.
How to Order a Signed Bookplate from Ren Hutchings, Mike Chen and/or K.B. Wagers
*A bookplate is essentially a signed sticker that is separate from the book itself, meaning that the book is not directly signed.  Once you receive your bookplate, you are free to affix it to your book, or wherever you see fit to do so.*
About the Author

REN HUTCHINGS is a speculative fiction writer, writing mentor, and history grad. She spent most of the past decade working in game dev while also plotting twisty space novels. She loves pop science, unexplained mysteries, 90s music, collecting outdated electronics, and pondering about alternate universes. Ren always drafts out of order, and almost everything she writes ends up involving a dash of time travel. You can find Ren online at renhutchings.com, and on social media as @voidcricket.

MIKE CHEN is a critically acclaimed science fiction author based out of the San Francisco Bay Area. His debut novel HERE AND NOW AND THEN was a finalist for the Goodreads Choice, CALIBA Golden Poppy, and Compton Crook awards. His other novels include A BEGINNING AT THE END, WE COULD BE HEROES, LIGHT YEARS FROM HOME, and STAR WARS: BROTHERHOOD. He has also contributed to the STAR WARS: FROM A CERTAIN POINT OF VIEW anthology and covers geek culture for sites like Nerdist, StarTrek.com, and The Mary Sue. In previous lives, Mike worked as a sports journalist, DJ, musician, and aerospace engineer. He lives with his wife, daughter, and many rescue animals. Follow him on Twitter and Instagram: @mikechenwriter

K.B. WAGERS is the author of the NeoG Adventures from Harper Voyager, including A PALE LIGHT IN THE BLACK and HOLD FAST THROUGH THE FIRE and the Indranan and Farian War trilogies from Orbit Books. They live in northern Colorado in a self-made jungle. They are a fan of whiskey and cats, JUPITER ASCENDING and the Muppets. You can find them on Twitter @kbwagers and Instagram @midwaybrawler for political commentary, plant photos, and video game play-throughs.

A Beginning at the End (Paperback)

Here and Now and Then (Paperback)

Hold Fast Through the Fire: A NeoG Novel (Hardcover)

A Pale Light in the Black: A NeoG Novel (Paperback)

Beyond the Empire (The Indranan War #3) (Paperback)

After the Crown (The Indranan War #2) (Paperback)

Behind the Throne (The Indranan War #1) (Paperback)