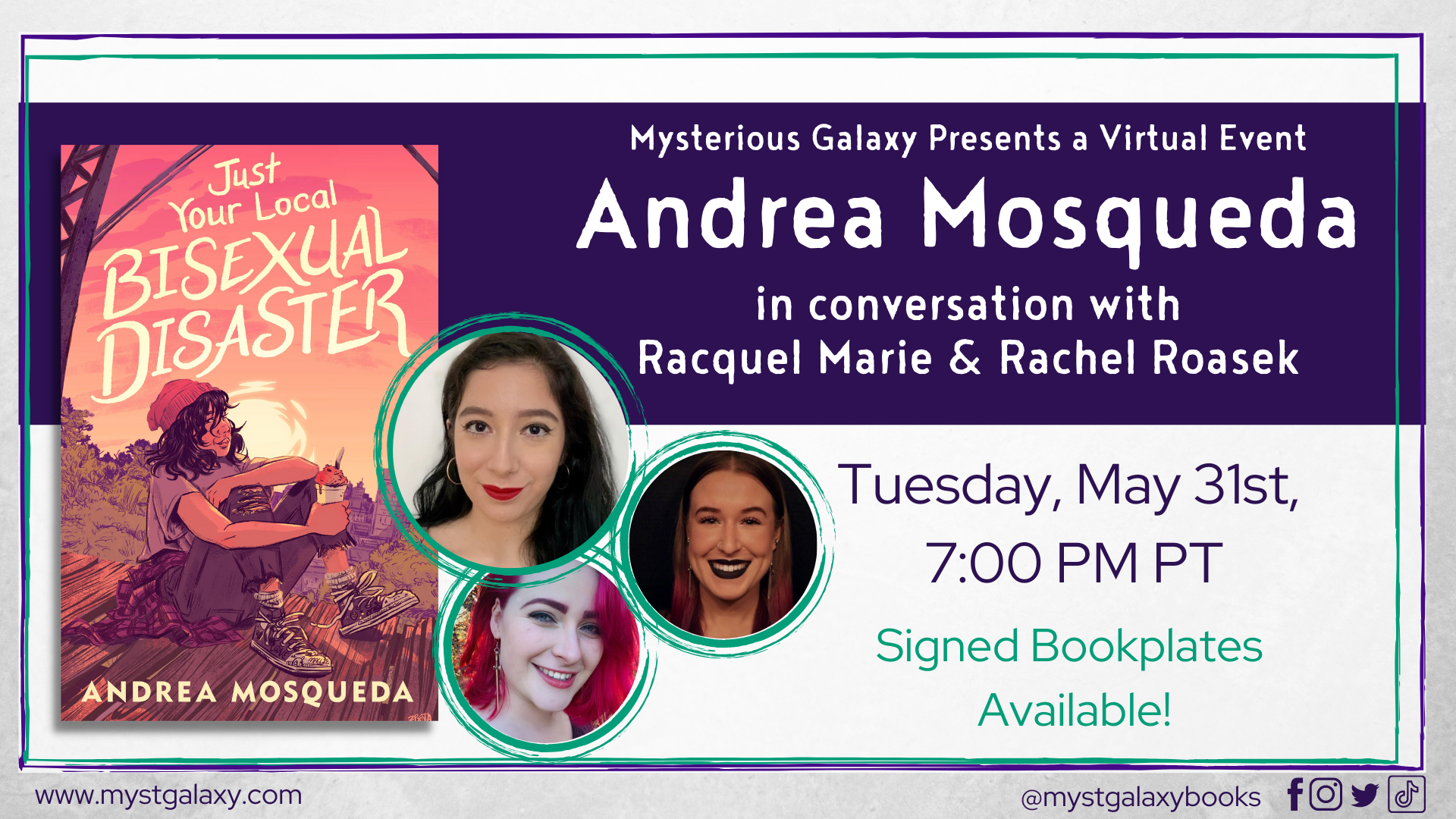 Event date:
Tuesday, May 31, 2022 - 7:00pm
Andrea Mosqueda in conversation with Racquel Marie and Rachel Roasek - A Virtual Event
Mysterious Galaxy's virtual events are hosted on Crowdcast. Click here to register for the event and here to view our virtual code of conduct. Accessibility: Real-time captioning for all Crowdcast events is available via Google Chrome. For enabling captions, please follow this guide. More info here.
How to Order a Signed Bookplate from Andrea Mosqueda
*A bookplate is essentially a signed sticker that is separate from the book itself, meaning that the book is not directly signed.  Once you receive your bookplate, you are free to affix it to your book, or wherever you see fit to do so.*
About the Authors
ANDREA MOSQUEDA is a Chicana writer. She was born and raised in Texas’s Rio Grande Valley. She currently lives in Brooklyn with her partner and works in the publishing industry as an assistant editor. When she’s not writing or editing, she can be found doing her makeup, drinking too much coffee, and angsting over children’s media. JUST YOUR LOCAL BISEXUAL DISASTER is her first book.

RACQUEL MARIE grew up in Southern California where her passion for storytelling of all kinds was encouraged by her friends and big family. She received a B.A. in English with an emphasis in Creative Writing and a minor in Gender and Sexuality Studies from the University of California, Irvine. Racquel primarily writes YA contemporaries starring queer Latine characters like herself. When not writing or reading, she loves practicing beauty and special effects makeup, watching and producing YouTube videos, and teaching herself to play ukulele in spite of her extremely long nails. She is the author of OPHELIA AFTER ALL and YOU DON'T HAVE A SHOT.

RACHEL ROASEK received her BA from the University of North Carolina at Greensboro in 2017, with a degree in Drama and two minors in Sign Language and Anthropology. When not coming up with fictional worlds, she works as both a voice actor and stage technician. She currently lives in New Jersey with a few dying plants and her dog, Lupe.

About JUST YOUR LOCAL BISEXUAL DISASTER

Growing up in Texas’s Rio Grande Valley, Maggie Gonzalez has always been a little messy, but she’s okay with that. After all, she has a great family, a goofy group of friends, a rocky romantic history, and dreams of being a music photographer. Tasked with picking an escort for her little sister’s quinceañera, Maggie has to face the truth: that her feelings about her friends—and her future—aren’t as simple as she’d once believed.

As Maggie’s search for the perfect escort continues, she’s forced to confront new (and old) feelings for three of her friends: Amanda, her best friend and first-ever crush; Matthew, her ex-boyfriend twice-over who refuses to stop flirting with her, and Dani, the new girl who has romantic baggage of her own. On top of this romantic disaster, she can’t stop thinking about the uncertainty of her own plans for the future and what that means for the people she loves.

As the weeks wind down and the boundaries between friendship and love become hazy, Maggie finds herself more and more confused with each photo. When her tried-and-true medium causes more chaos than calm, Maggie needs to figure out how to avoid certain disaster—or be brave enough to dive right into it, in JUST YOUR LOCAL BISEXUAL DISASTER.

Ophelia After All (Hardcover)