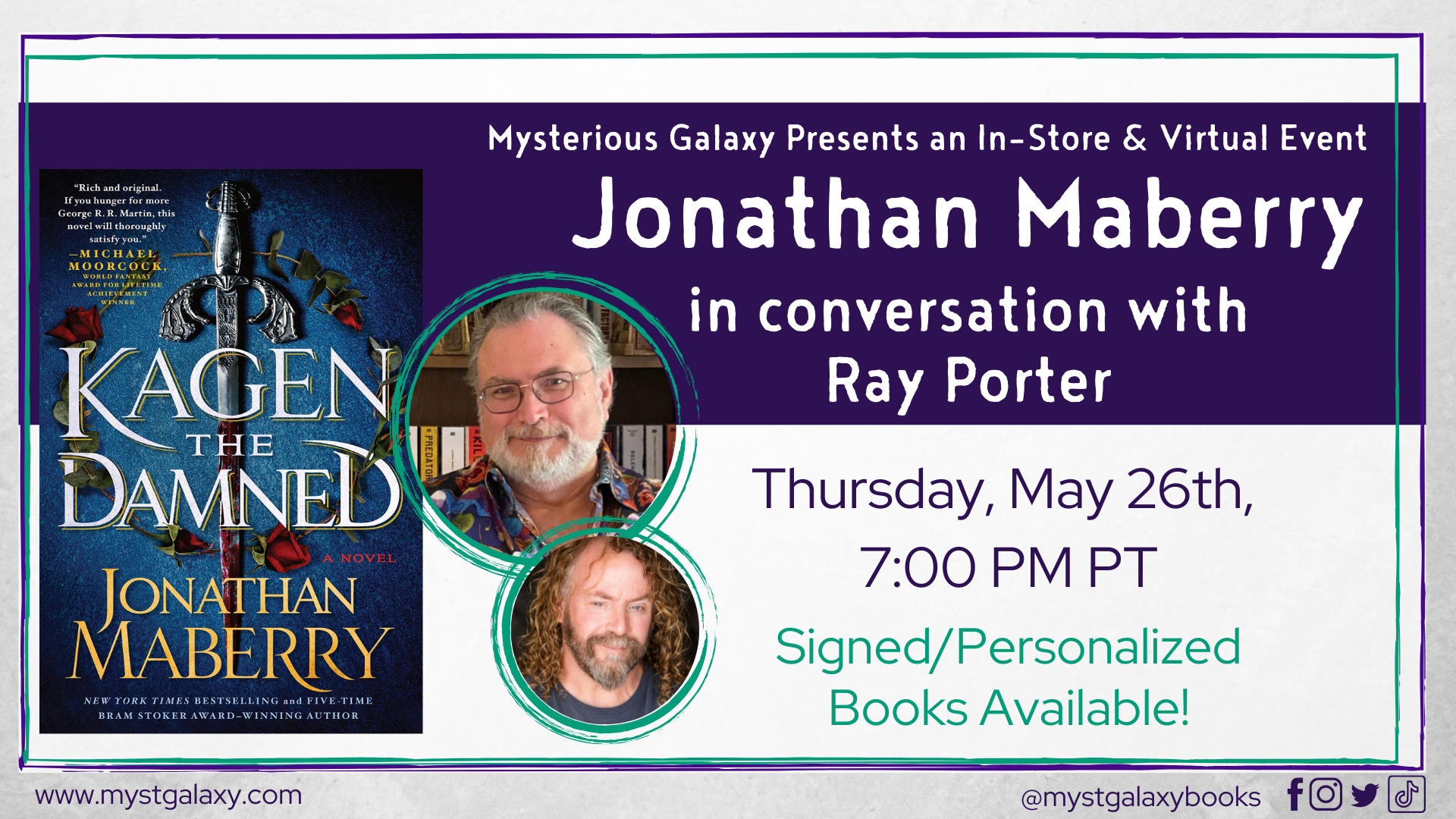 Event date:
Thursday, May 26, 2022 - 7:00pm
Jonathan Maberry in conversation with Ray Porter
A Ticketed Hybrid In-Store and Virtual Event
This is an TICKED IN-STORE EVENT that will also be broadcasted live through Crowdcast for those unable to attend in person. This event will consist of a 30 minute discussion with the author followed by the book signing.

Purchasing a copy of KAGEN THE DAMNED or any other of Jonathan's available books through Mysterious Galaxy will get you a numbered ticket for the signing line after the event.  Those who have not purchased a book through us are still welcome to get their books signed, but will have to wait until after the numbered line has finished. Purchasing your books through us allows us to continue to host author events, so we thank you in advance for your support!

If you're joining us virtually, Mysterious Galaxy's virtual events are hosted on Crowdcast. Click here to register for the event and here to view our virtual code of conduct. Accessibility: Real-time captioning for all Crowdcast events is available via Google Chrome. For enabling captions, please follow this guide. More info here.
How to Order a Signed/Personalized Book from Jonathan Maberry if you're not attending in person
About the Authors
JONATHAN MABERRY is a NEW YORK TIMES bestselling author, 5-time Bram Stoker Award-winner, 3-time Scribe Award winner, Inkpot Award winner, and comic book writer. His vampire apocalypse book series, V-WARS, was a Netflix original series. He writes in multiple genres including suspense, thriller, horror, science fiction, fantasy, and action; for adults, teens and middle grade. He is also the editor of WEIRD TALES MAGAZINE and many anthologies. www.jonathanmaberry.com

RAY PORTER is the multiple Earphones Award–winning and Audie-nominated narrator of over 400 audiobooks, such as RELENTLESS : A JOE LEDGER AND ROGUE TEAM INTERNATIONAL NOVEL. Most recently, his narration of PROJECT HAIL MARY by Andy Weir, won Audie awards for Best Science Fiction and Audiobook of the Year. Comic book movie fans will recognize him as Darkseid in Zack Snyder’s JUSTICE LEAGUE. He has also appeared in MODERN FAMILY, NAOMI, ARGO, THE RUNAWAYS, SONS OF ANARCHY, JUSTIFIED, ALMOST FAMOUS, and many other TV and film productions.

About KAGEN THE DAMNED

Sworn by Oath
Kagen Vale is the trusted and feared captain of the palace guard, charged with protection of the royal children of the Silver Empire. But one night, Kagen is drugged and the entire imperial family is killed, leaving the empire in ruins.

Abandoned by the Gods
Haunted and broken, Kagen is abandoned by his gods and damned forever. He becomes a wanderer, trying to take down as many of his enemies as possible while plotting to assassinate the usurper, the deadly Witch-king of Hakkia. While all around him magic—long banished from the world—returns in strange and terrifying ways.

Fueled by Rage
To exact his vengeance, Kagen must venture into strange lands, battle bizarre and terrifying creatures, and gather allies for a suicide mission into the heart of the Witch-king’s empire.

Kings and gods will fear him.

Kagen the Damned: A Novel (Paperback)