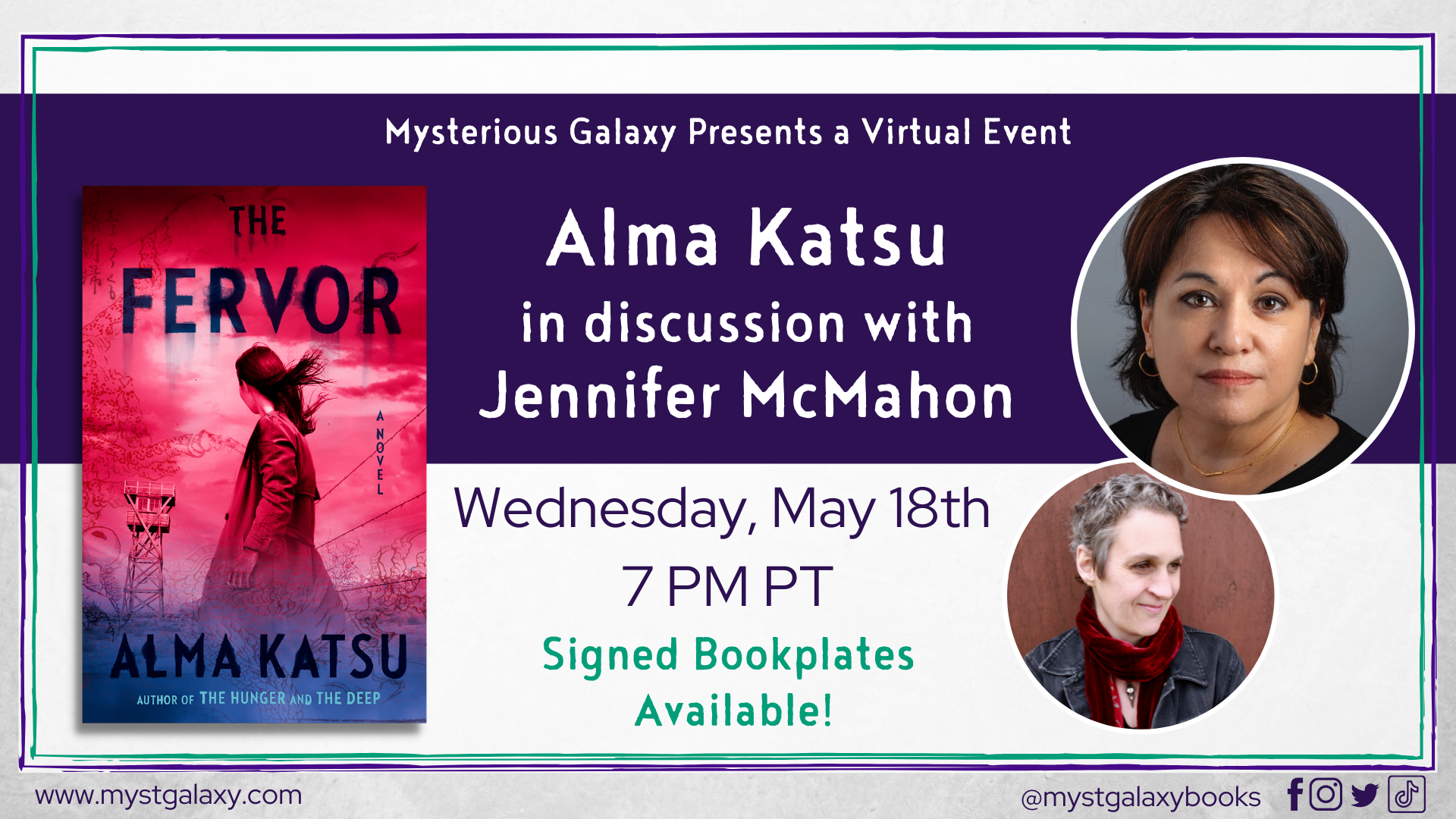 Event date:
Wednesday, May 18, 2022 - 7:00pm
Alma Katsu in conversation with Jennifer McMahon - A Virtual Event
Mysterious Galaxy's virtual events are hosted on Crowdcast. Click here to register for the event and here to view our virtual code of conduct. Accessibility: Real-time captioning for all Crowdcast events is available via Google Chrome. For enabling captions, please follow this guide. More info here.
How to Order a Signed Bookplate from Alma Katsu

About the Authors
ALMA KATSU is the award-winning author of seven novels. Her latest is THE FERVOR, a reimagining of the Japanese internment that BOOKLIST called “a stunning triumph” (starred) and LIBRARY JOURNAL called “a must read for all, not just genre fans” (starred). RED WIDOW, her first espionage novel, is a nominee for the Thriller Writers Award for best novel, was a Nyt Editors Choice, and is in development for a TV series.

JENNIFER MCMAHON is the NEW YORK TIMES Bestselling author of eleven novels, including PROMISE NOT TO TELL, THE WINTER PEOPLE, and her latest, THE CHILDREN ON THE HILL. She lives in Vermont with her partner, Drea, and their daughter, Zella.

About THE FERVOR
1944: As World War II rages on, the threat has come to the home front. In a remote corner of Idaho, Meiko Briggs and her daughter, Aiko, are desperate to return home. Following Meiko's husband's enlistment as an air force pilot in the Pacific months prior, Meiko and Aiko were taken from their home in Seattle and sent to one of the internment camps in the Midwest. It didn’t matter that Aiko was American-born: They were Japanese, and therefore considered a threat by the American government.

Mother and daughter attempt to hold on to elements of their old life in the camp when a mysterious disease begins to spread among those interned. What starts as a minor cold quickly becomes spontaneous fits of violence and aggression, even death. And when a disconcerting team of doctors arrive, nearly more threatening than the illness itself, Meiko and her daughter team up with a newspaper reporter and widowed missionary to investigate, and it becomes clear to them that something more sinister is afoot, a demon from the stories of Meiko’s childhood, hell-bent on infiltrating their already strange world.

Inspired by the Japanese yokai and the jorogumo spider demon, The Fervor explores the horrors of the supernatural beyond just the threat of the occult. With a keen and prescient eye, Katsu crafts a terrifying story about the danger of demonization, a mysterious contagion, and the search to stop its spread before it's too late. A sharp account of too-recent history, it's a deep excavation of how we decide who gets to be human when being human matters most.

The Children on the Hill (Hardcover)

The Invited: A Novel (Paperback)