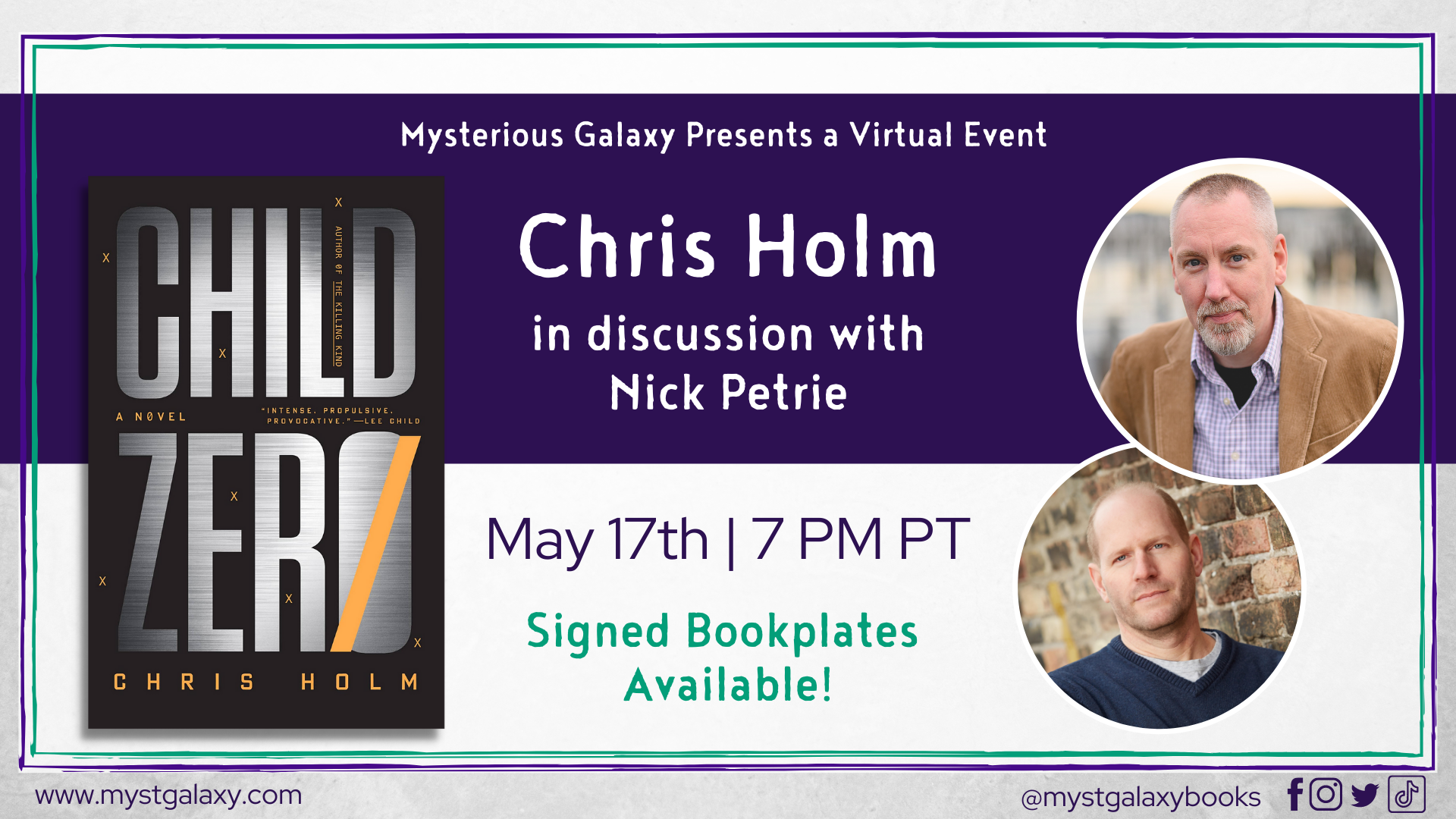 Event date:
Tuesday, May 17, 2022 - 7:00pm
Chris Holm in discussion with Nick Petrie - A Virtual Event
Mysterious Galaxy's virtual events are hosted on Crowdcast. Click here to register for the event and here to view our virtual code of conduct. Accessibility: Real-time captioning for all Crowdcast events is available via Google Chrome. For enabling captions, please follow this guide. More info here.
How to Order a Signed Bookplate from Chris Holm
*A bookplate is essentially a signed sticker that is separate from the book itself, meaning that the book is not directly signed.  Once you receive your bookplate, you are free to affix it to your book, or wherever you see fit to do so.*
About the Authors
CHRIS HOLM is the author of the cross-genre Collector trilogy, the Michael Hendricks thrillers, and thirty-odd short stories in a variety of genres. His work has been selected for The Best American Mystery Stories, named a NEW YORK TIMES Editors' Choice, appeared on more than fifty year's best lists, and won a number of awards, including the 2016 Anthony Award for Best Novel. He lives in Portland, Maine.

NICK PETRIE writes the bestselling and critically-acclaimed Peter Ash novels, including THE DRIFTER, BURNING BRIGHT, LIGHT IT UP, TEAR IT DOWN, THE WILD ONE, THE BREAKER, and THE RUNAWAY. His work has been nominated for, or won, the Edgar, Anthony, Hammett, Barry and ITW Thriller Awards. He has worked as a carpenter, cabinetmaker, remodeling contractor, and building inspector.  A husband and father, he lives in Milwaukee, Wisconsin, where he rides his mountain bike, hikes the Ice Age Trail, and works on the next Peter Ash novel.

About CHILD ZERO
It began four years ago with a worldwide uptick of bacterial infections: meningitis in Frankfurt, cholera in Johannesburg, tuberculosis in New Delhi. Although the outbreaks spread aggressively and proved impervious to our drugs of last resort, public health officials initially dismissed them as unrelated.

They were wrong. Antibiotic resistance soon roiled across the globe. Diseases long thought beaten came surging back. The death toll skyrocketed. Then New York City was ravaged by the most heinous act of bioterror the world had ever seen, perpetrated by a new brand of extremist bent on pushing humanity to extinction.

Detective Jacob Gibson, who lost his wife in the 8/17 attack, is home caring for his sick daughter when his partner summons him to a sprawling shantytown in Central Park, the apparent site of a mass murder. Jake is startled to discover that, despite a life of abject squalor, the victims died in perfect health—and his only hope of finding answers is a twelve-year-old boy on the run from some very dangerous men.

The Wild One (A Peter Ash Novel #5) (Paperback)

Tear It Down (A Peter Ash Novel #4) (Paperback)