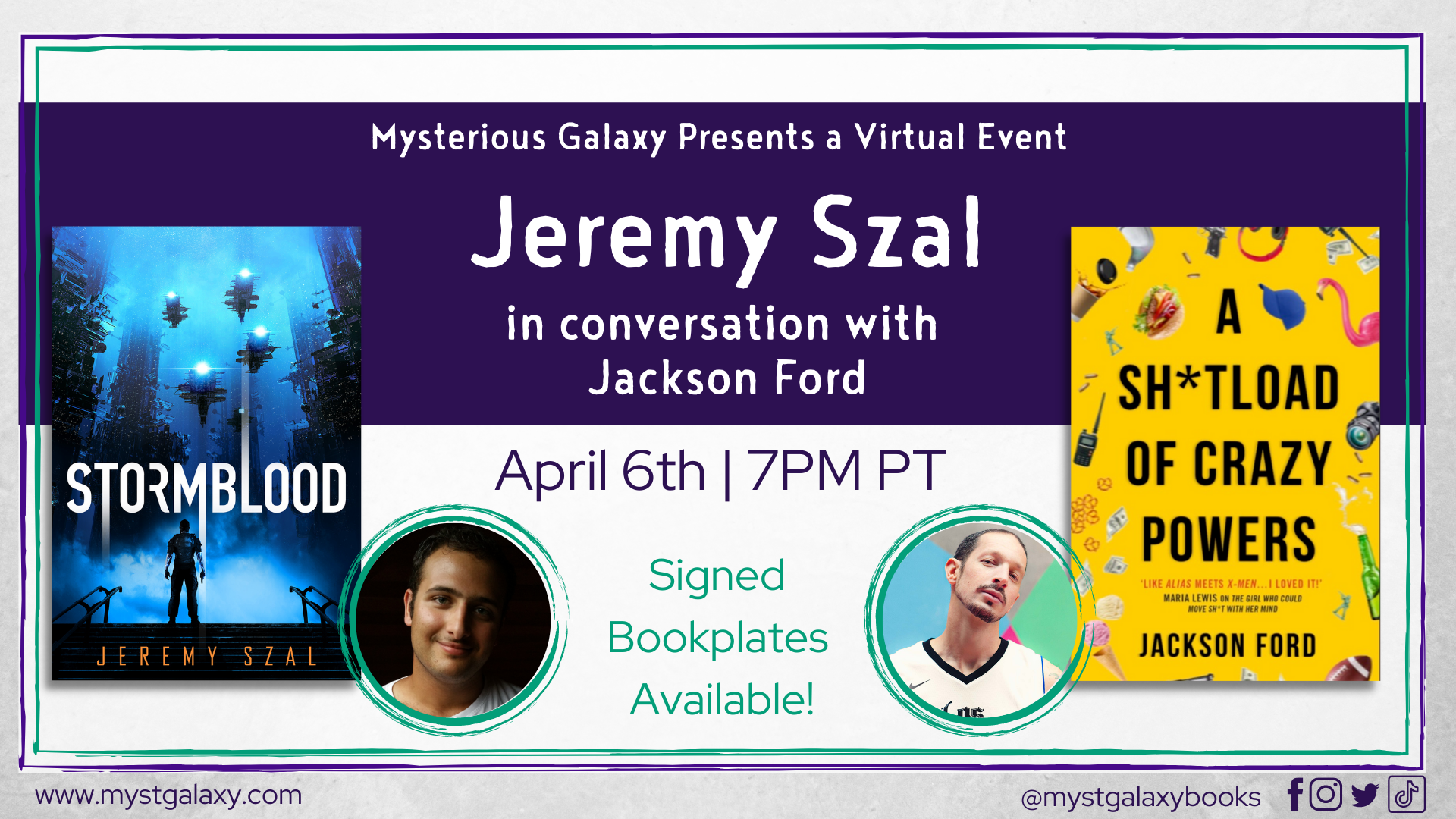 Event date:
Wednesday, April 6, 2022 - 7:00pm
Jeremy Szal in conversation with Jackson Ford - A Virtual Event
Mysterious Galaxy's virtual events are hosted on Crowdcast. Click here to register for the event and here to view our virtual code of conduct. Accessibility: Real-time captioning for all Crowdcast events is available via Google Chrome. For enabling captions, please follow this guide. More info here.
How to Order a Signed Bookplate from Jeremy Szal and/or Jackson Ford
*A bookplate is essentially a signed sticker that is separate from the book itself, meaning that the book is not directly signed.  Once you receive your bookplate, you are free to affix it to your book, or wherever you see fit to do so.*
About the Authors

JEREMY SZAL was born in 1995 and was raised by wild dingoes, which should explain a lot. He writes dark science fiction of a character-driven, morally grey nature. His main series is The Common Trilogy, including STORMBLOOD and BLINDSPACE and an untitled third book, about a drug harvested from alien DNA that makes users permanently addicted to aggression and violence. He’s written over forty short stories, translated into six languages. He carves out a living in Sydney, Australia with his family. He loves watching weird movies, collecting boutique gins, exploring cities, cold weather, and dark humour. Find him at jeremyszal.com or @JeremySzal

JACKSON FORD is a South African author living in Vancouver. He spends his time working out how to smash rap music, food, superpowers and dick jokes into something people will want to read. He is the author of the Frost Files series, which has been optioned for television by CBS. The next book in the series, A Sh*tload of Crazy Powers, drops in May 2022.

Vakov Fukasawa used to be a Reaper: a bio-enhanced soldier fighting for the Harmony, against a brutal invading empire. He's still fighting now, on a different battlefield: taking on stormtech. To make him a perfect soldier, Harmony injected him with the DNA of an extinct alien race, altering his body chemistry and leaving him permanently addicted to adrenaline and aggression. But although they meant to create soldiers, at the same time Harmony created a new drug market that has millions hopelessly addicted to their own body chemistry.

Vakov may have walked away from Harmony, but they still know where to find him, and his former Reaper colleagues are being murdered by someone, or something - and Vakov is appalled to learn his estranged brother is involved. Suddenly it's an investigation he can't turn down . . . but the closer he comes to the truth, the more addicted to stormtech he becomes.
And it's possible the war isn't over, after all . . .

A Sh*tload of Crazy Powers (The Frost Files #4) (Paperback)

Eye of the Sh*t Storm (The Frost Files #3) (Paperback)