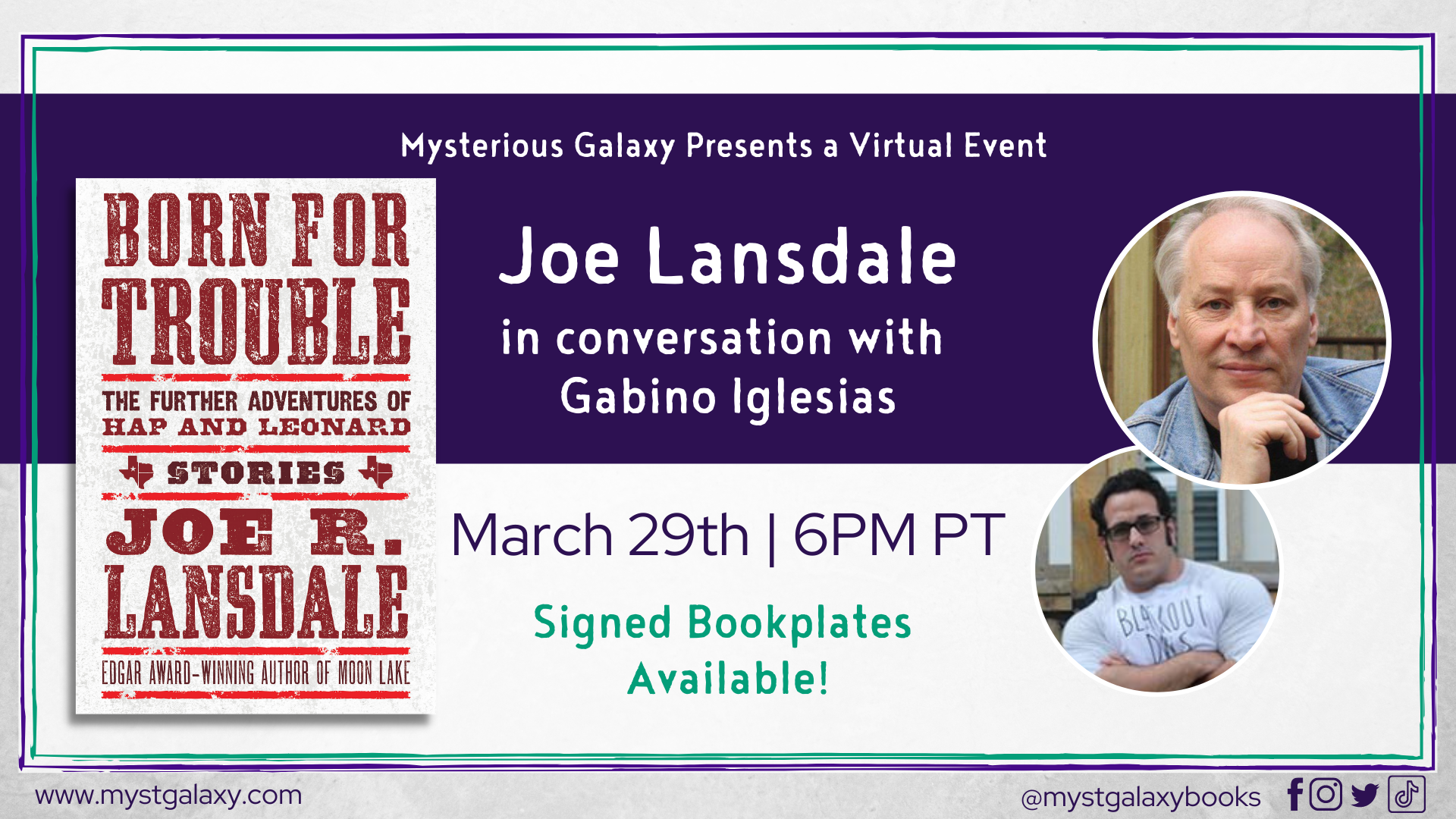 Event date:
Tuesday, March 29, 2022 - 6:00pm
Joe R. Lansdale in conversation with Gabino Iglesias - A Virtual Event
Mysterious Galaxy's virtual events are hosted on Crowdcast. Click here to register for the event and here to view our virtual code of conduct. Accessibility: Real-time captioning for all Crowdcast events is available via Google Chrome. For enabling captions, please follow this guide. More info here.
How to Order a Signed Bookplate from Joe R. Lansdale
About the Authors

JOE R. LANSDALE is the internationally bestselling author of over fifty novels, including the popular, long-running Hap and Leonard series. Many of his cult classics have been adapted for television and
film, most famously the films Bubba Ho-Tep and Cold in July, and the Hap and Leonard series on Sundance TV and Netflix. Lansdale has written numerous screenplays and teleplays, including the iconic
Batman the Animated Series. He has won an Edgar Award for The Bottoms, ten Stoker Awards, and has been designated a World Horror Grandmaster. Lansdale, like many of his characters, lives in East Texas.

GABINO IGLESIAS is a writer, professor, book reviewer, editor, and translator living in Austin, TX. He is the author of Zero Saints and Coyote Songs, and the editor of Both Sides. His work has been translated into five languages, optioned for film, nominated to the Bram Stoker Award and the Locus Award and won the Wonderland Book Award for Best Novel in 2019. His reviews appear regularly in places like NPR, the Los Angeles Review of Books, the San Francisco Chronicle, Vol. 1 Brooklyn, Criminal Element, Mystery Tribune, and other venues. He's been a juror for the Shirley Jackson Awards twice, the Newfound Prose Prize, the Splatterpunk Awards, and PANK Magazine'sBig Book Contest. He teaches creative writing at SNHU's online MFA program and runs a series of low-cost writing workshops.

About Born for Trouble: The Further Adventures of Hap and Leonard

When you meet him, Hap Collins seems like just a good ol' boy. But even in his misspent youth, his best pal was Leonard Pine: black, gay, and the ultimate outsider. Together, they have sort of found their way as partners in crime-solving--and at least as often, as hired muscle.

As Hap wrestles with his new identity as a husband and father, and Leonard finds love in a long-term relationship, the boys continue their crime-solving shenanigans. They grapple with a stolen stuffed dog, uncover the sordid secret of a missing bookmobile, compete in a warped version of the Most Dangerous Game, regroup after Hap's visit to the psychologist goes terribly awry, and much more.

So sit yourself back and settle in--Born for the Trouble is East Texas mayhem as only the master mojo storyteller Lansdale could possibly tell.

Born for Trouble: The Further Adventures of Hap and Leonard (Paperback)

The Elephant of Surprise (Hap and Leonard) (Hardcover)

The Devil Takes You Home: A Novel (Hardcover)