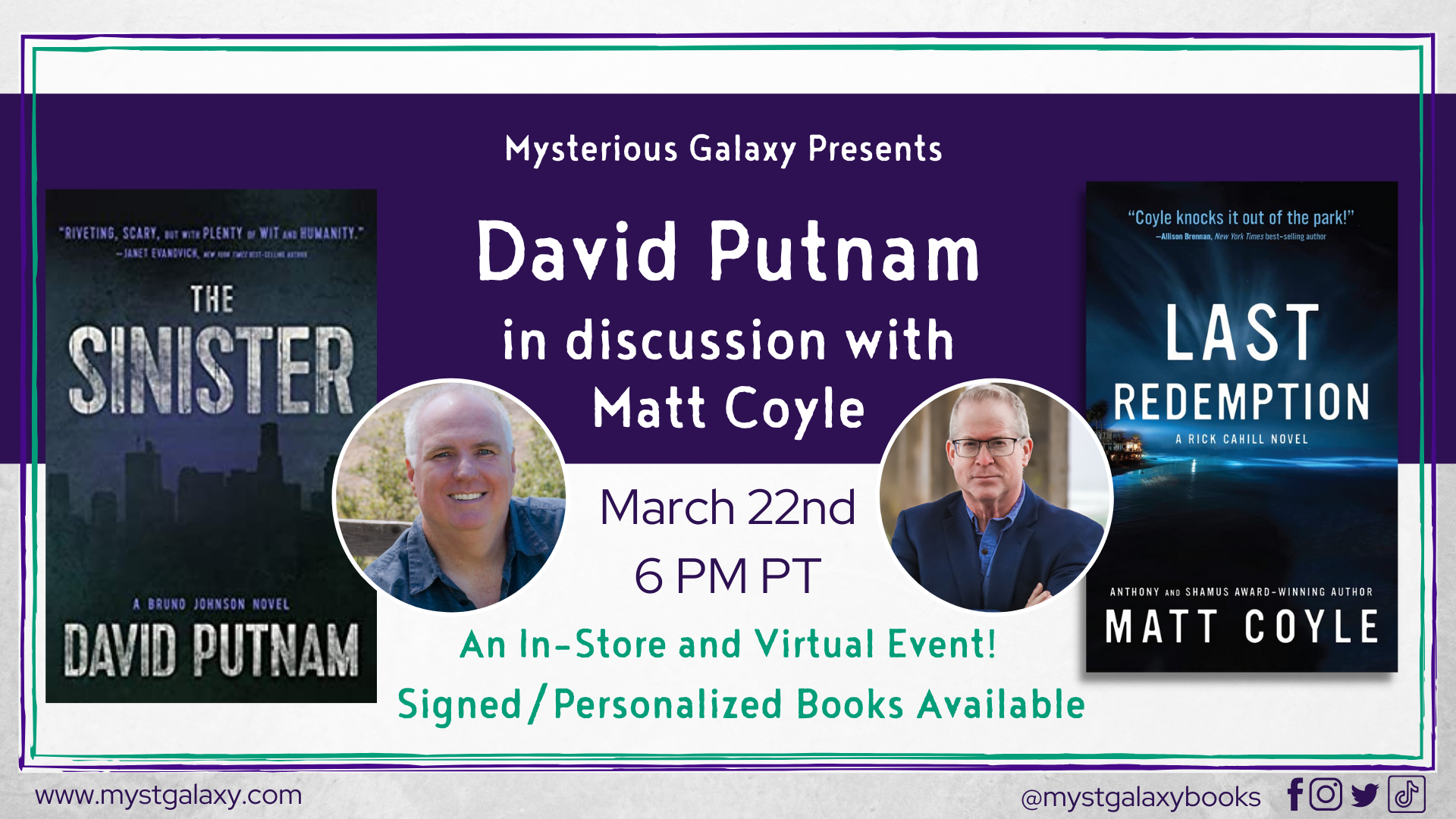 This is an IN-STORE EVENT that will also be broadcasted live through Crowdcast for those unable to attend in person. This event will consist of a 30 minute discussion with the author and conversation partner, followed by the book signing.

During his career in law enforcement, best-selling author DAVID PUTNAM worked in narcotics, violent crimes, criminal intelligence, hostage rescue, SWAT, and internal affairs, to name just a few. He is the recipient of many awards and commendations for heroism. The Sinister is the ninth novel in the best-selling Bruno Johnson Crime Series, following The Disposables, The Replacements, The Squandered, The Vanquished, The Innocents, The Reckless, The Heartless, and The Ruthless.

David's latest thriller is receiving rave reviews, including a starred review from Publisher's Weekly, and this endorsement from #1 New York Times best-selling author Janet Evanovich, who called The Sinister: “Riveting, scary, but with plenty of wit and humanity, author David Putnam brings ex-cop Bruno Johnson’s world alive in a way that only another ex-cop could. In Putnam’s capable hands, the characters jump off the page—even the dog.”

MATT COYLE is the author of the bestselling Rick Cahill crime series. His books have won the Anthony, Shamus, Lefty, Ben Franklin Silver, Foreword Reviews Book of the Year Silver, and San Diego Book Awards and have been nominated for the Barry and Macavity awards, among others. Matt hosts the Crime Corner podcast and lives in San Diego with his yellow Lab, Angus. He was named the Mystery Writer of the Year by the San Diego Writers Festival for 2021. Last Redemption, the eight book in the Rick Cahill series, explores the physical damage caused by a lifetime of violence as Rick risks his life to help a friend.

Ex-cop, ex-con Bruno Johnson and his wife Marie hide in plain sight from the law in an upscale L.A. hotel as Bruno heals from a run-in with a brutal outlaw motorcycle gang—and the loss of his son—a son he didn’t know he had until it was too late.

Marie, now pregnant with her first child, fears Bruno may never fully recover. She knows that soon they must return to Costa Rica to rejoin their large family of rescued children—kids who owe their lives to Bruno and Marie’s intervention.

But when Bruno’s friend, FBI Deputy Director, Dan Chulack, pleads with Bruno to help rescue his kidnapped granddaughter, escape plans are put on hold. After exhausting all legitimate investigative avenues, Chulack seeks Bruno’s brand of justice. With Marie’s reluctant consent and her own special expertise, they plunge into the evil world of those who prey on children.

Meanwhile, Bruno's mother, a woman he has never known, appears asking for forgiveness—and Bruno’s assistance—while bringing her own set of complications. Bruno finds his professional and his personal lives colliding in a pursuit that is excruciating and brutal.