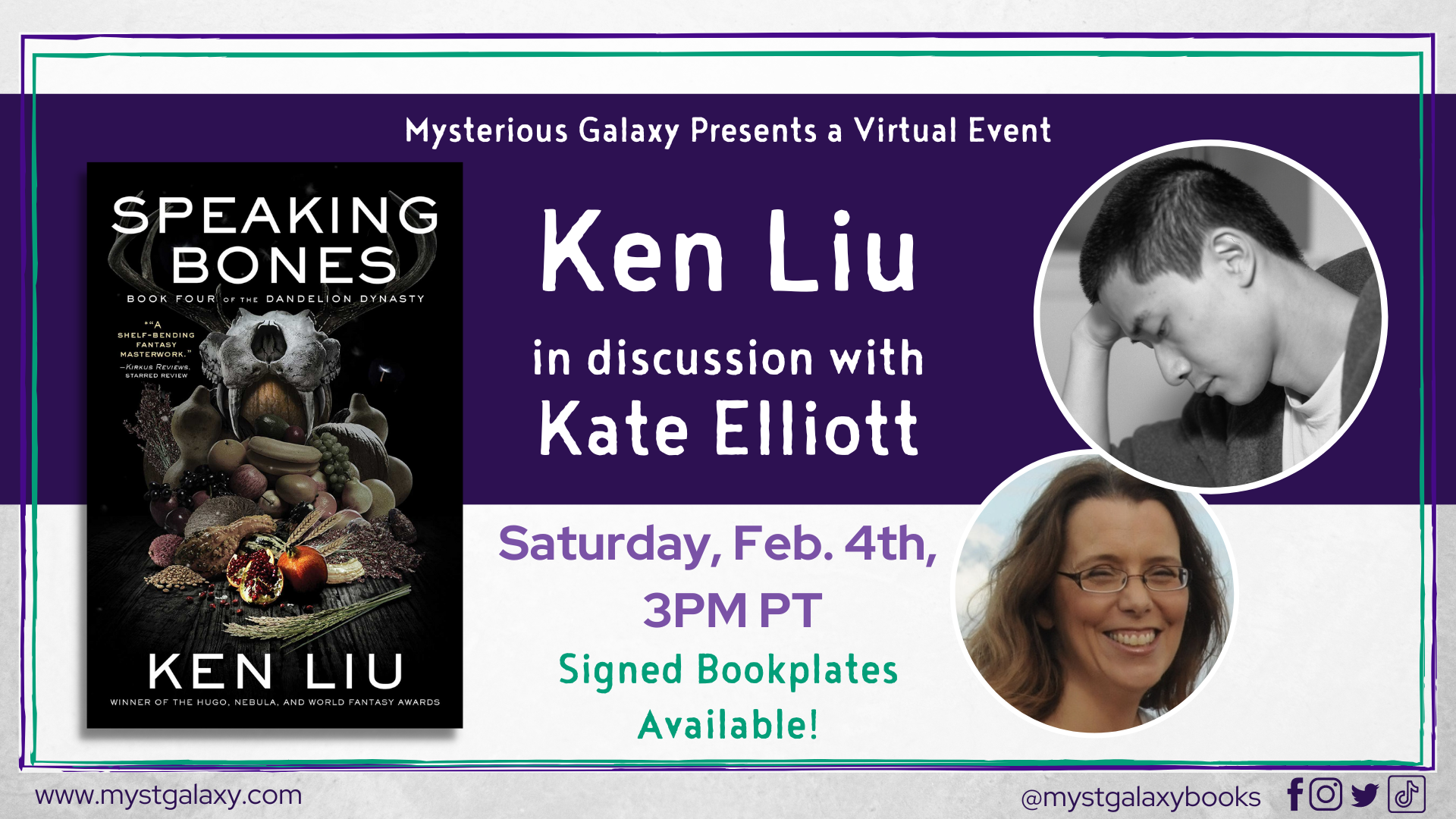 This virtual event with Ken Liu, in discussion with Kate Elliott, is free to attend! We are offering signed bookplates for this event!

How to Order a Signed Bookplate from Ken Liu:

About the Authors
KEN LIU is an award-winning American author of speculative fiction. His collection, THE PAPER MENAGERIE AND OTHER STORIES, has been published in more than a dozen languages. Liu’s other works include THE GRACE OF KINGS, THE WALL OF STORMS, THE VEILED THRONE, and a second collection THE HIDDEN GIRL AND OTHER STORIES. He has been involved in multiple media adaptations of his work including the short story “Good Hunting,” adapted as an episode in Netflix’s animated series LOVE, DEATH + ROBOTS; and AMC’s PANTHEON, adapted from an interconnected series of short stories. “The Hidden Girl,” “The Message,” and “The Cleaners” have also been optioned for development. Liu previously worked as a software engineer, corporate lawyer, and litigation consultant. He frequently speaks at conferences and universities on topics including futurism, cryptocurrency, the history of technology, and the value of storytelling. Liu lives with his family near Boston, Massachusetts.

KATE ELLIOTT has been writing science fiction and fantasy for 30 years, after bursting onto the scene with JARAN. She is best known for her Crown of Stars epic fantasy series and the NEW YORK TIMES bestselling YA fantasy COURT OF FIVES. Elliott's particular focus is immersive world-building & centering women in epic stories of adventure, amidst transformative cultural change. She lives in Hawaii, where she paddles outrigger canoes & spoils her Schnauzer.

About SPEAKING BONES
The battle continues in this silkpunk fantasy as science and destiny collide against the will of the gods in this final installment in the epic Dandelion Dynasty series from Hugo, Nebula, and World Fantasy Award–winning author Ken Liu.

The concluding book of The Dandelion Dynasty begins immediately after the events of The Veiled Throne, in the middle of two wars on two lands among three people separated by an ocean yet held together by the invisible strands of love.

Harried by Lyucu pursuers, Princess Théra and Pékyu Takval try to reestablish an ancestral dream even as their hearts grow in doubt. The people of Dara continue to struggle against the genocidal Lyucu as both nations vacillate between starkly contrasting visions for their futures. Even the gods cannot see through the Wall of Storms, for only mortal hearts can decide mortal fates.

Award-winning author Ken Liu fulfills the covenants first laid out a decade ago in a series delving deep into the connection between national myths and national constitutions in this ambitious, “magnificent fantasy epic” (NPR).

The Wall of Storms (The Dandelion Dynasty #2) (Paperback)

The Grace of Kings (The Dandelion Dynasty #1) (Paperback)

The Paper Menagerie and Other Stories (Paperback)

The Hidden Girl and Other Stories (Paperback)