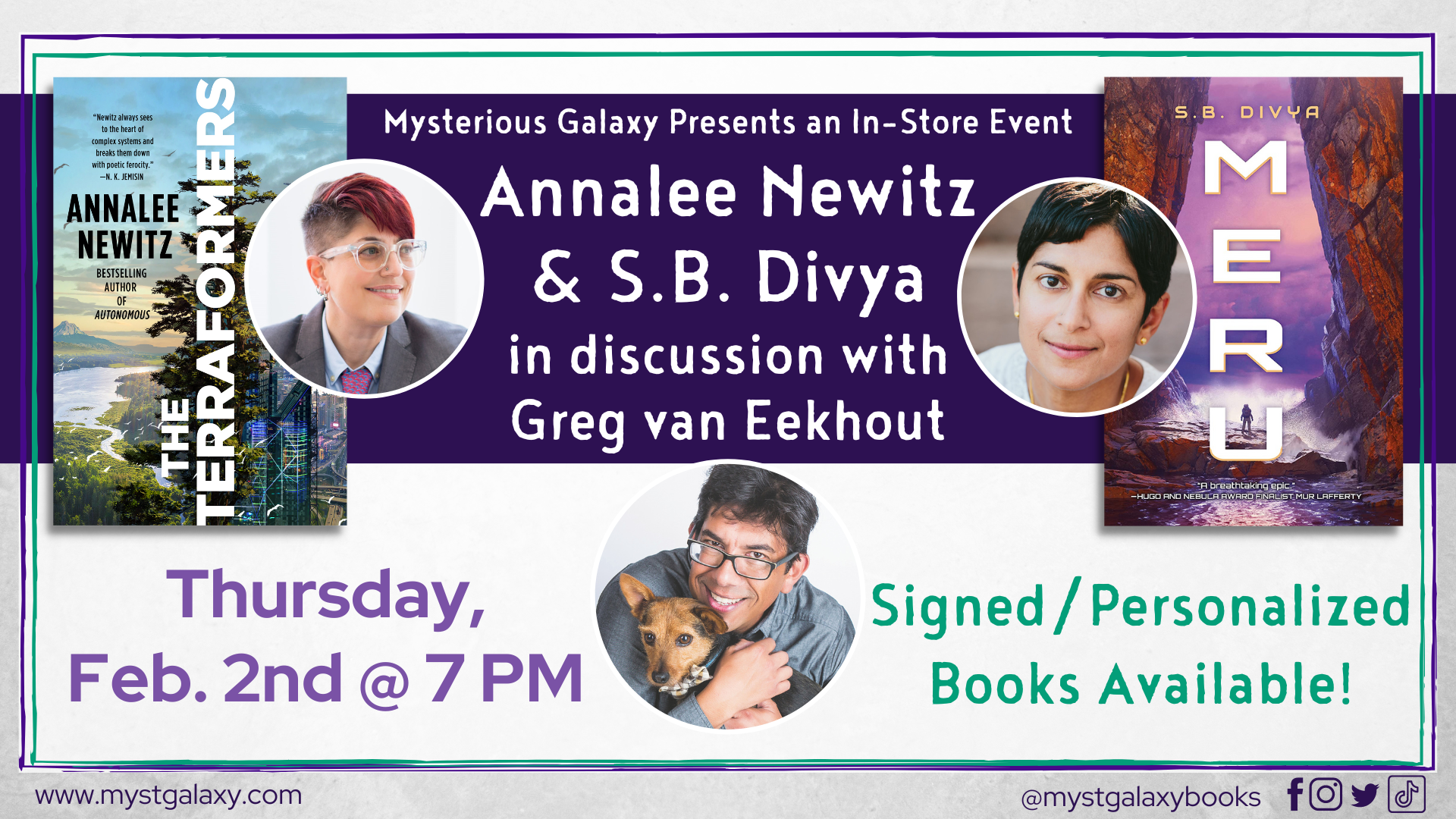 This is an IN-STORE EVENT with Annalee Newitz & S.B. Divya, in discussion with Greg van Eekhout. The event will consist of a 30 minute discussion with the authors, followed by an audience Q&A, and lastly the book signing.

Purchasing a copy of THE TERRAFORMERS and/or MERU through Mysterious Galaxy will get you a numbered ticket for the signing line after the event. Those who have not purchased a book through us are still welcome to get their books signed, but will have to wait until after the numbered line has finished. Purchasing your books through Mysterious Galaxy allows us to continue to host author events, so we thank you in advance for your support!

How to Order a Signed/Personalized Book from Annalee Newitz, S.B. Divya, and/or Greg van Eekhout if you're not attending the event

About the Authors
ANNALEE NEWITZ is an American journalist, editor, and author of fiction and nonfiction. They are the recipient of a Knight Science Journalism Fellowship from MIT, and have written for POPULAR SCIENCE, THE NEW YORKER, and the WASHINGTON POST. They founded the science fiction website io9 and served as Editor-in-Chief from 2008–2015, and then became Editor-in-Chief at Gizmodo and Tech Culture Editor at Ars Technica. Their book SCATTER, ADAPT, AND REMEMBER: HOW HUMANS WILL SURVIVE A MASS EXTINCTION was nominated for the LA TIMES Book Prize in science. Their first novel, AUTONOMOUS, won a Lambda award.

S.B. DIVYA (she/any) is a lover of science, math, fiction, and the Oxford comma. She is the Hugo and Nebula nominated author of MERU and MACHINEHOOD. Her stories have appeared in numerous magazines and anthologies, and she a former editor of Escape Pod, the weekly science fiction podcast. Divya holds degrees in Computational Neuroscience and Signal Processing. Find her on Twitter as @divyastweets or at www.sbdivya.com.

GREG VAN EEKHOUT is the author of several novels for young readers, including WEIRD KID (“A heartfelt, pitch-perfect middle grade novel”—PUBLISHERS WEEKLY, starred review); COG; and Voyage of the Dogs. He lives in San Diego, California, with his astronomy/physics professor wife and two dogs. He’s worked as an educational software developer, ice-cream scooper, part-time college instructor, and telemarketer. Being a writer is the only job he’s ever actually liked. You can find more about Greg at his website: www.writingandsnacks.com.
About THE TERRAFORMERS
Destry's life is dedicated to terraforming Sask-E. As part of the Environmental Rescue Team, she cares for the planet and its burgeoning eco-systems as her parents and their parents did before her.

But the bright, clean future they're building comes under threat when Destry discovers a city full of people that shouldn’t exist, hidden inside a massive volcano.

As she uncovers more about their past, Destry begins to question the mission she's devoted her life to, and must make a choice that will reverberate through Sask-E's future for generations to come.

About MERU
For five centuries, human life has been restricted to Earth, while posthuman descendants called alloys freely explore the galaxy. But when the Earthlike planet of Meru is discovered, two unlikely companions venture forth to test the habitability of this unoccupied new world and the future of human-alloy relations.

For Jayanthi, the adopted human child of alloy parents, it's an opportunity to rectify the ancient reputation of her species as avaricious and destructive, and to give humanity a new place in the universe. For Vaha, Jayanthi's alloy pilot, it's a daunting yet irresistible adventure to find success as an individual.

As the journey challenges their resolve in unexpected ways, the two form a bond that only deepens with their time alone on Meru. But how can Jayanthi succeed at freeing humanity from its past when she and Vaha have been set up to fail?

Against all odds, hope is human, too.

The Future of Another Timeline (Paperback)

Scatter, Adapt, and Remember: How Humans Will Survive a Mass Extinction (Paperback)