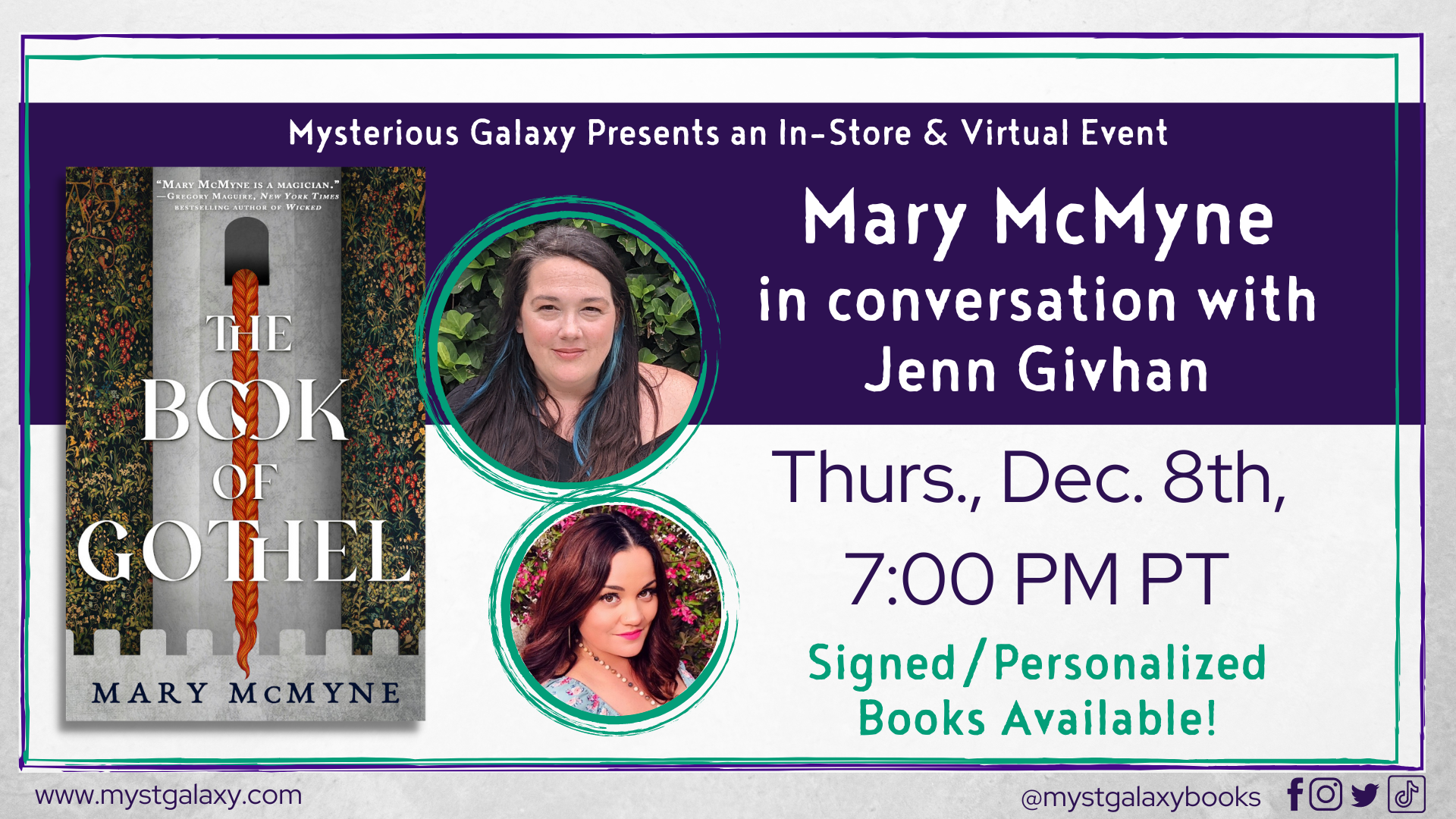 This is an IN-STORE EVENT that will also be broadcasted live through Crowdcast for those unable to attend in person. This event will consist of a 30 minute discussion with Mary McMyne and conversation partner Jenn Givhan, followed by the book signing.

How to Order a Signed/Personalized copy of Mary's THE BOOK OF GOTHEL, and/or any books from Jenn Givhan, if you're not attending the event.

*Masks are required for all in-person attendees. We will have masks for any that may forget there's.*

About the Authors
MARY MCMYNE has widely published stories and poems in venues like REDIVIDER, GULF COAST, STRANGE HORIZONS, and APEX MAGAZINE, and her debut fairytale poetry chapbook, WOLF SKIN (Dancing Girl Press, 2014), won the Elgin Chapbook Award. She is a graduate of the New York University MFA Program.
JENNIFER GIVHAN, a National Endowment for the Arts and PEN/Rosenthal Emerging Voices fellow, is a Chicana and indigenous novelist, poet, and transformational coach. She is the author of JUBILEE, which received an honorable mention for the 2021 Rudolfo Anaya Best Latino-Focused Fiction Book Award, and TRINITY SIGHT, winner of the 2020 Southwest Book Award. She has also published four full-length poetry collections and her honors include the Frost Place Latinx Scholarship and the Joy Harjo Poetry Prize. She raises her children in New Mexico.
About THE BOOK OF GOTHEL
Germany, 1156. With her strange black eyes and even stranger fainting spells, young Haelewise has never quite fit in. Shunned by her village, her only solace lies in the stories her mother tells of child-stealing witches, of princes in wolf-skins, and of an ancient tower cloaked in mist, where women will find shelter if they are brave enough to seek it.

When her mother dies, Haelewise is left unmoored. With nothing left for her in her village, she sets out to find the legendary tower her mother spoke of—a place called Gothel, where she meets a wise woman willing to take Haelewise under her wing. There, she discovers that magic is found not only in the realm of fairy tales.

But Haelewise is not the only woman to seek refuge at Gothel. It’s also a haven for a girl named Rika, who carries with her a secret the church strives to keep hidden. A secret that reveals a dark world of ancient spells and murderous nobles, behind the world Haelewise has always known.

The Book of Gothel (Hardcover)