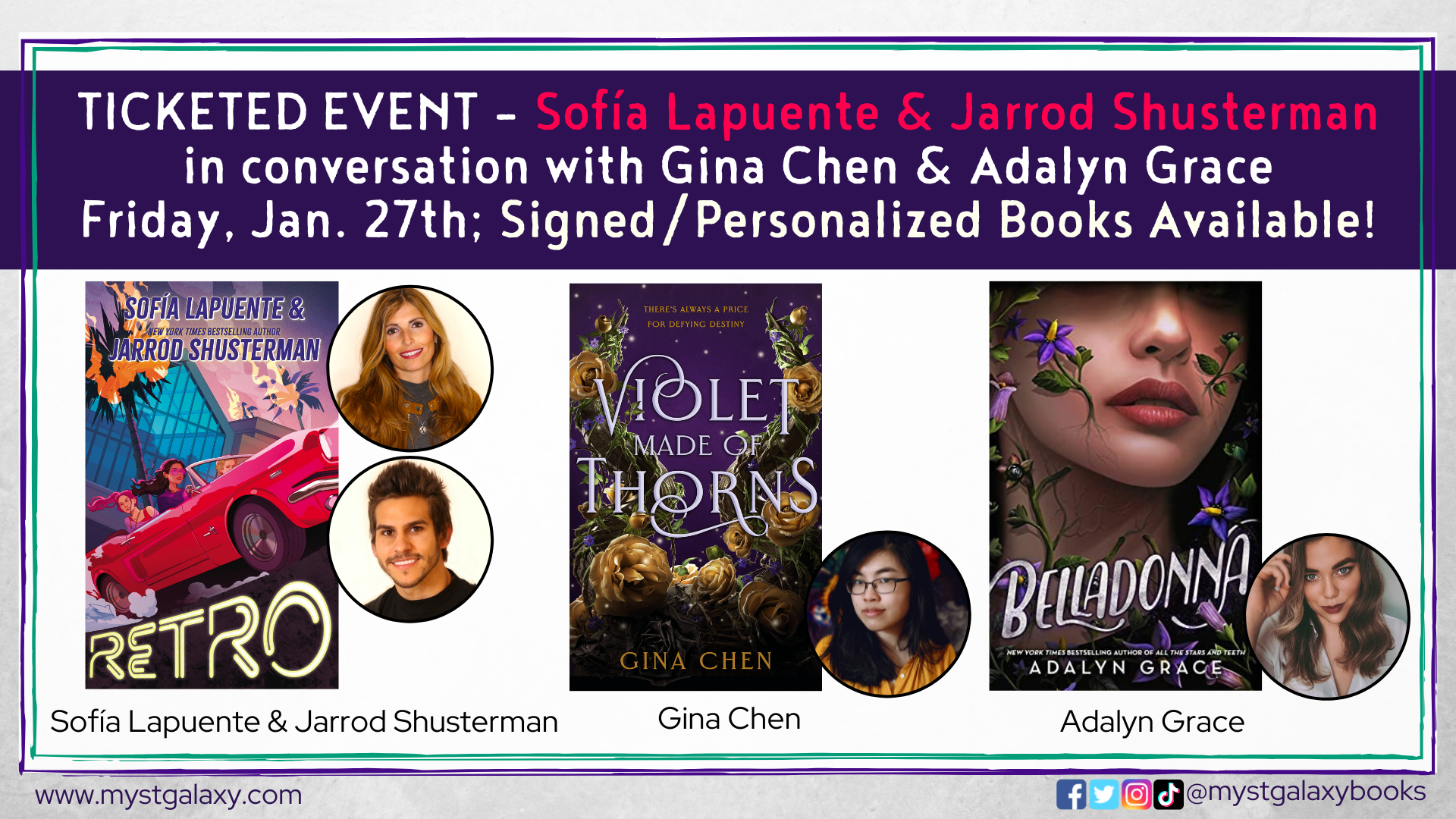 Sofía Lapuente and Jarrod Shusterman in conversation with Gina Chen and Adalyn Grace
A Hybrid In-Store and Virtual Book Signing!

This is a TICKETED, IN-STORE EVENT that will also be broadcasted live through Crowdcast for those unable to attend in person. This event will consist of a 30 minute discussion with the authors followed by the book signing.

Purchasing a copy of RETRO through Mysterious Galaxy will get you a numbered ticket for the signing line after the event.  Those who have not purchased a book through us are still welcome to get their books signed, but will have to wait until after the numbered line has finished. Purchasing your books through us allows us to continue to host author events, so we thank you in advance for your support! 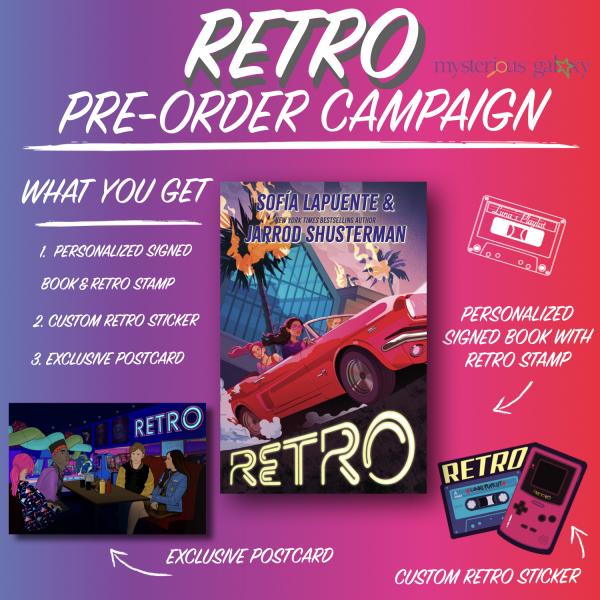 How to Order Signed/Personalized Books from Sofía Lapuente and Jarrod Shusterman, and/or Gina Chen and Adalyn Grace, if you're not attending the event

1. Add the desired book(s) to your cart.
2. At checkout in the "order comments" box write "signed only" or to whom your book(s) should be personalized (i.e. "To: Ms. Galaxy"). Requests for anything beyond a name, like a note or quote, are up to the author's discretion and are not guaranteed. Orders must be placed by 12pm pt on the day of the event (January 27th). Please call the store if you wish to purchase a book, or add/alter personalization to an existing order, after this time.

About the Authors
SOFÍA LAPUENTE is an author, screenwriter, and avid world traveler who immigrated from Spain to the United States to realize her dream of storytelling. Since then, she has received a master’s degree in fine arts at UCLA, worked as a producer and casting director on an Emmy nominated show, and received coauthor credits in GLEANINGS, the fourth installment of the bestselling Arc of a Scythe series, with her partner, Jarrod Shusterman. Together, the couple writes and produces film and television under their production company Dos Lobos Entertainment.

JARROD SHUSTERMAN is the NEW YORK TIMES bestselling coauthor of novel DRY, which he is adapting for a major Hollywood film studio with Neal Shusterman. He is also the coauthor of the accoladed novel ROXY. His books have all received critical acclaim and multiple starred reviews. Sofí Lapuente and Jarrod are partners in every sense of the word, with love and multiculturalism as an ethos—living between Madrid, Spain, and Los Angeles, California. If they are not working, it means they’re eating. For behind-the-scenes author content and stupidly funny videos, follow them on Instagram and TikTok @SofiandJarrod.

GINA CHEN tells stories about fantastic worlds featuring heroines, antiheroines, and the kind of cleverness that brings trouble in its wake. A self-taught artist with a degree in computer science, she generates creative nonsense in all forms of media and always has a project stewing. VIOLET MADE OF THORNS is her debut fantasy novel. For more info, visit actualgina.com and follow @actualgina on Twitter and Instagram.

ADALYN GRACE is a NEW YORK TIMES bestselling author of ALL THE STARS AND TEETH, which was named “2020’s biggest YA fantasy” by ENTERTAINMENT WEEKLY. Prior to becoming an author, Adalyn spent four years working in live theatre, acted as the managing editor of a nonprofit newspaper, and studied storytelling as an intern on Nickelodeon Animation’s popular series THE LEGEND OF KORRA. Local to San Diego, Adalyn spends her non-writing days by watching too much anime, and by playing video games with her dorky dog.

About RETRO
After a cyberbullying incident at her school goes viral, Luna Iglesias finds herself at the heart of a brewing controversy. When the social media company Limbo—who are also implicated in the scandal—sweeps in with an offer that sounds like an opportunity to turn over a new leaf, she’s happy to jump on the new trend. It’s called the Retro Challenge, where contestants live without modern technology, wear vintage clothes, party as if the future wasn’t already written, and fall in love as if they were living in a movie. And the winners get a scholarship to the college of their dreams.

At first, the challenge is fun. But then things get dangerous. Kids start disappearing, including Luna’s friends. There are voices in the woods. Bloodred markings on the trees. And Luna increasingly begins to wonder if all these strange happenings are connected with the Retro Challenge.

Secrets. Lies. Betrayal. The weight of her family on her shoulders. There’s so much on the line for Luna – not to mention she’s falling for the last guy she expected. Unless she can figure out the truth behind who is really sabotaging the challenge, the next person to disappear may be Luna herself.

Gleanings: Stories from the Arc of a Scythe (Hardcover)

Violet Made of Thorns (Hardcover)