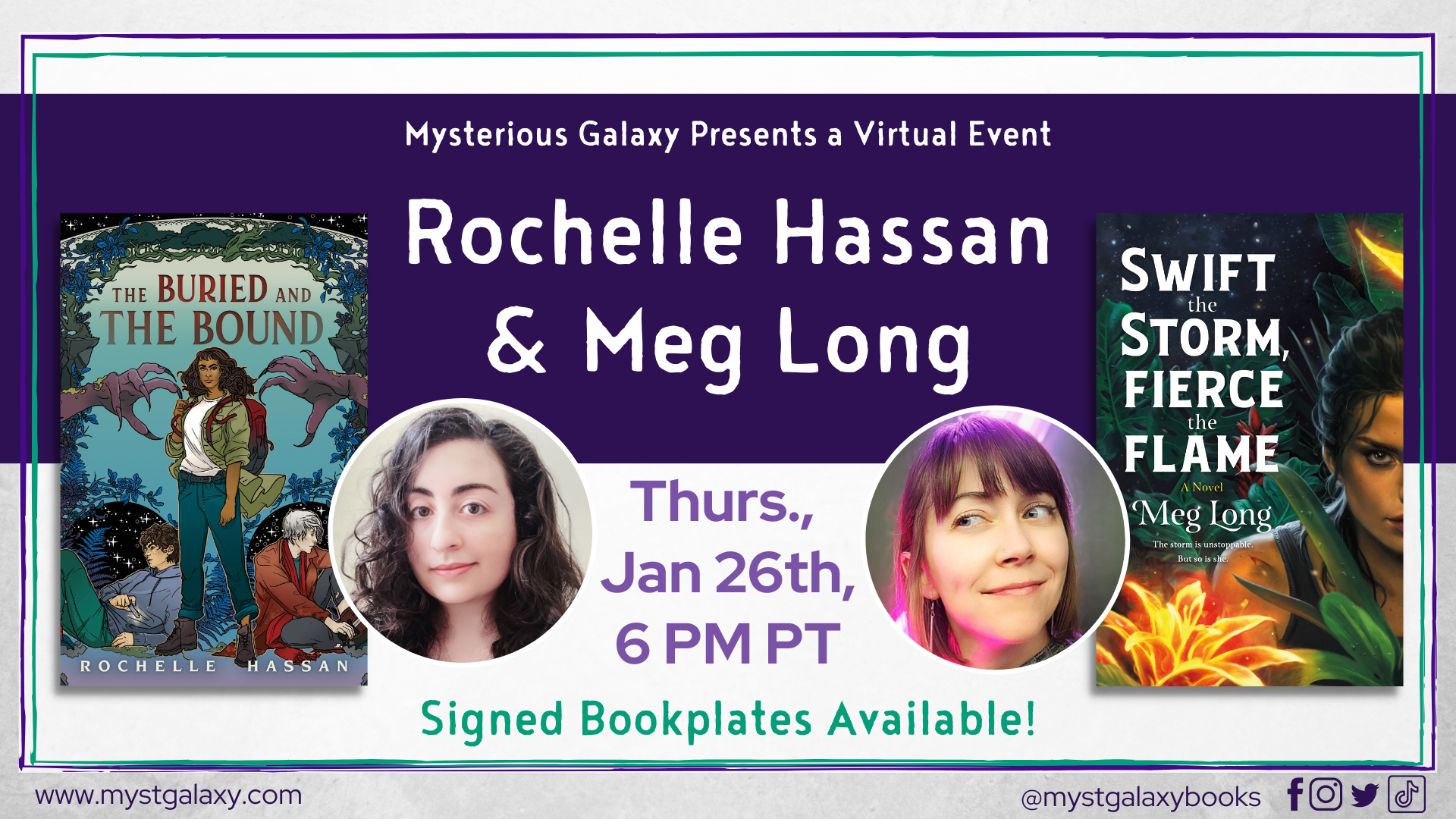 This virtual event with Rochelle Hassan and Meg Long is free to attend! We are offering signed bookplates for this event!

How to Order a Signed Bookplate from Rochelle Hassan and/or Meg Long:

About the Authors
ROCHELLE HASSAN grew up reading about dragons, quests, and unlikely heroes; now she writes about them, too. She is the author of the middle grade novel THE PRINCE OF NOWHERE and young adult fantasy novel, THE BURIED AND THE BOUND. She lives in New York.

MEG LONG was born and raised in Louisiana and originally wanted to be a spy. Instead she somehow found herself teaching overseas in China and Malaysia before ending up in Colorado, where it snows entirely too much. She taught middle and high school for eight years before jumping to the tech industry as a content writer. When not reading or writing, she’s kicking things at her Muay Thai gym with her boyfriend, playing video games, or obsessing over Sailor Moon fanart.

About THE BURIED AND THE BOUND
As the only hedgewitch in Blackthorn, Massachusetts—an uncommonly magical place—Aziza El-Amin has bargained with wood nymphs, rescued palm-sized fairies from house cats, banished flesh-eating shadows from the local park. But when a dark entity awakens in the forest outside of town, eroding the invisible boundary between the human world and fairyland, run-of-the-mill fae mischief turns into outright aggression, and the danger—to herself and others—becomes too great for her to handle alone.

Leo Merritt is no stranger to magical catastrophes. On his sixteenth birthday, a dormant curse kicked in and ripped away all his memories of his true love. A miserable year has passed since then. He's road-tripped up and down the East Coast looking for a way to get his memories back and hit one dead end after another. He doesn't even know his true love's name, but he feels the absence in his life, and it's haunting.

Desperate for answers, he makes a pact with Aziza: he’ll provide much-needed backup on her nightly patrols, and in exchange, she’ll help him break the curse.

When the creature in the woods sets its sights on them, their survival depends on the aid of a mysterious young necromancer they’re not certain they can trust. But they’ll have to work together to eradicate the new threat and take back their hometown... even if it forces them to uncover deeply buried secrets and make devastating sacrifices.

About SWIFT THE STORM, FIERCE THE FLAME
After a mission gone awry two years ago, Remy Castell has been desperately searching across worlds to find the friend she failed to save—the friend who changed her life by helping her overcome the brainwashing she was subjected to as a genetically engineered corporate agent.

Since then, she’s been chasing the only lead she has: fellow genopath Kiran Lore, the same secretive ex-squadmate who left her for dead when she compromised that mission. She nearly caught up to him on Tundar before joining the infamous sled race alongside outcast Sena and her wolf companion Iska. Now, all three of them have tracked Kiran back to Maraas, the jungle planet where Remy lost everything. But nothing on Maraas is how it was two years ago. Syndicates and scavvers alike are now trying to overthrow a megalomaniac corpo director, which Remy wants nothing to do with; fighting against corpos is as useless as trying to stay dry in the middle of the giant hellstorm that encircles the planet. But the storm—and the rebellion—are growing stronger by the minute.

When Remy finds Kiran, he doesn't run away like she expects. Instead, he offers her a deal: help with the revolution and he'll reunite her with her friend. But can she really trust the boy who betrayed her once before? With the entire planet on the edge of all-out war, Remy will have to decide just how far she's willing to go to save one girl before the impending storm drowns them all.

The Prince of Nowhere (Hardcover)

Swift the Storm, Fierce the Flame: A Novel (Hardcover)

Cold the Night, Fast the Wolves: A Novel (Paperback)

Cold the Night, Fast the Wolves: A Novel (Hardcover)