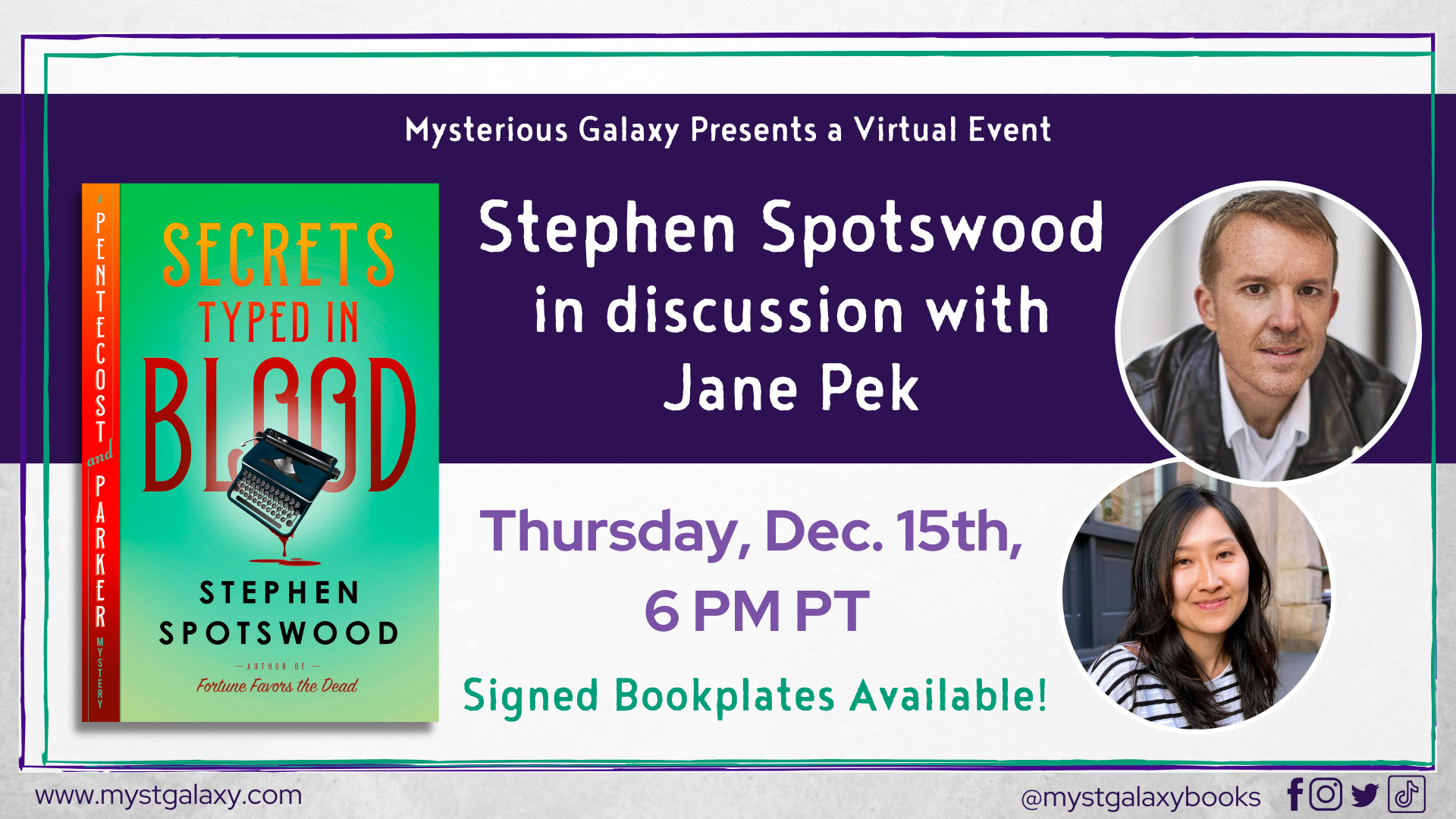 Stephen Spotswood in discussion with Jane Pek
A Virtual Event!

This virtual event is free to attend! However, all purchases of SECRETS TYPED IN BLOOD or any other of Stephen Spotswood's available books will come with a signed bookplate (while supplies last).

To get on the list for a bookplate, just add any of Stephen Spotswood's available books to your cart and put that you’d like a bookplate in the order comments on the checkout screen. The deadline to place an order to guarantee a bookplate is one week after the event, December 22nd. Please note, since it typically takes several weeks after an event for the bookplates to arrive at the store, your bookplate may be sent to you separately from the book.

About the Authors
STEPHEN SPOTSWOOD is an award-winning playwright, journalist, and educator. As a journalist, he has spent much of the last two decades writing about the aftermath of the wars in Iraq and Afghanistan and the struggles of wounded veterans. His dramatic work has been widely produced across the United States and he is the winner of the 2021 Nero Award for best American mystery. He makes his home in Washington, D.C. with his wife, young adult author Jessica Spotswood.

JANE PEK was born and grew up in Singapore. She holds a BA from Yale University, a JD from the New York University School of Law, and an MFA in Fiction from Brooklyn College. Her short fiction has appeared in THE BROOKLYN REVIEW, WITNESS, CONJUNCTIONS, LITERARY HUB, and twice in THE BEST AMERICAN SHORT STORIES. She currently lives in New York, where she works as a lawyer at a global investment company.

About SECRETS TYPED IN BLOOD
New York City, 1947: For years, Holly Quick has made a good living off of murder, filling up the pages of pulp detective magazines with gruesome tales of revenge. Now someone is bringing her stories to life and leaving a trail of blood-soaked bodies behind. With the threat of another murder looming, and reluctant to go to the police, Holly turns to the best crime-solving duo in or out of the pulps, Willowjean “Will” Parker and her boss, famed detective Lillian Pentecost.

The pair are handed the seemingly-impossible task of investigating three murders at once without tipping off the cops or the press that the crimes are connected. A tall order made even more difficult by the fact that Will is already signed up to spend her daylight hours undercover as a guileless secretary in the hopes of digging up a lead on an old adversary, Dr. Olivia Waterhouse.

But even if Will is stuck in pencil skirts and sensible shoes, she’s not about to let her boss have all the fun. Soon she’s diving into an underground world of people obsessed with murder and the men and women who commit them. Can the killer be found in the Black Museum Club, run by a philanthropist whose collection of grim murder memorabilia may not be enough to satisfy his lust for the homicidal? Or is it Holly Quick’s pair of editors, who read about murder all day, but clearly aren’t telling the full story?

With victims seemingly chosen at random and a murderer who thrives on spectacle, the case has the great Lillian Pentecost questioning her methods. But whatever she does, she’d better do it fast. Holly Quick has a secret, too and it’s about to bring death right to Pentecost and Parker’s doorstep.

Secrets Typed in Blood: A Pentecost and Parker Mystery (Hardcover)

Fortune Favors the Dead: A Pentecost and Parker Mystery (Paperback)

Murder Under Her Skin: A Pentecost and Parker Mystery (Hardcover)

Murder Under Her Skin: A Pentecost and Parker Mystery (Paperback)