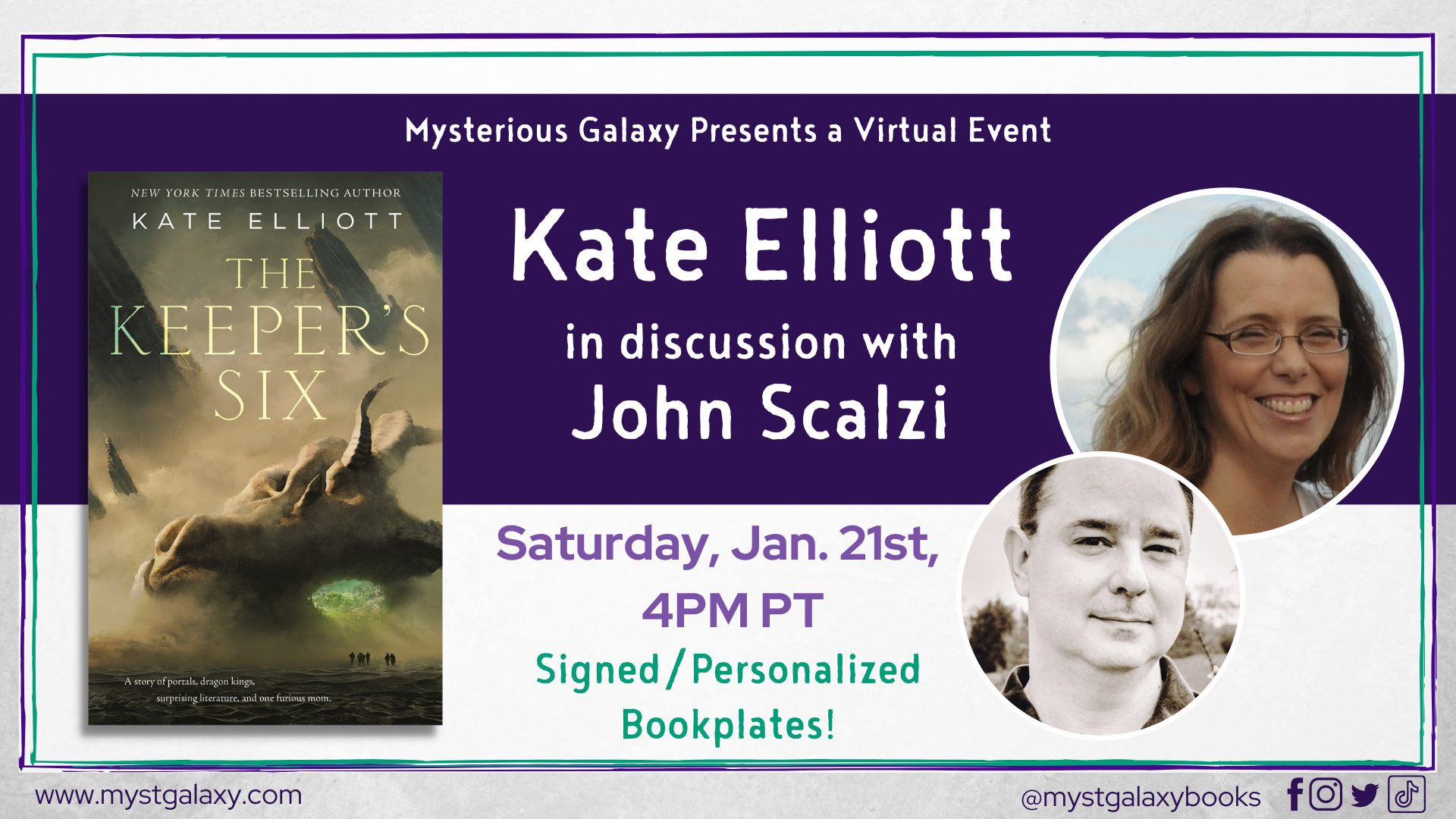 This virtual event with Kate Elliott, in discussion with John Scalzi, is free to attend! We are offering signed/personalized bookplates for this event!

How to Order a Signed/Personalized Bookplate from Kate Elliott:

About the Authors
KATE ELLIOTT has been writing science fiction and fantasy for 30 years, after bursting onto the scene with JARAN. She is best known for her Crown of Stars epic fantasy series and the NEW YORK TIMES bestselling YA fantasy COURT OF FIVES. Elliott's particular focus is immersive world-building & centering women in epic stories of adventure, amidst transformative cultural change. She lives in Hawaii, where she paddles outrigger canoes & spoils her Schnauzer.
JOHN SCALZI is one of the most popular SF authors of his generation. His debut OLD MAN'S WAR won him the John W. Campbell Award for Best New Writer. His NEW YORK TIMES bestsellers include THE LAST COLONY, FUZZY NATION, and REDSHIRTS (which won the 2013 Hugo Award for Best Novel), and 2020's THE LAST EMPEROX. Material from his blog, Whatever, has also earned him two other Hugo Awards. Scalzi also serves as critic-at-large for the LOS ANGELES TIMES. He lives in Ohio with his wife and daughter.
About THE KEEPER'S SIX
It’s been a year since Esther set foot in the Beyond, the alien landscape stretching between worlds, crossing boundaries of space and time. She and her magical traveling party—her Hex—haven’t spoken since the Concilium banned them from the Beyond for a decade. But when she wakes in the middle of the night to her grown son’s cry for help, the members of her Hex are the only ones she can trust to help her bring him back from wherever he has been taken.

Esther will have to risk everything to find him. Undercover and hidden from the Concilium, she and her Hex will be tested by false dragon lords, a darkness so dense it can suffocate, and the bones of an old crime come back to haunt her.

There are terrors that dwell in the space between worlds.

Lock In: A Novel of the Near Future (The Lock In Series #1) (Mass Market)

Head On: A Novel of the Near Future (The Lock In Series #2) (Mass Market)

Unlocked: An Oral History of Haden's Syndrome (The Lock In Series #3) (Paperback)

Agent to the Stars (Paperback)