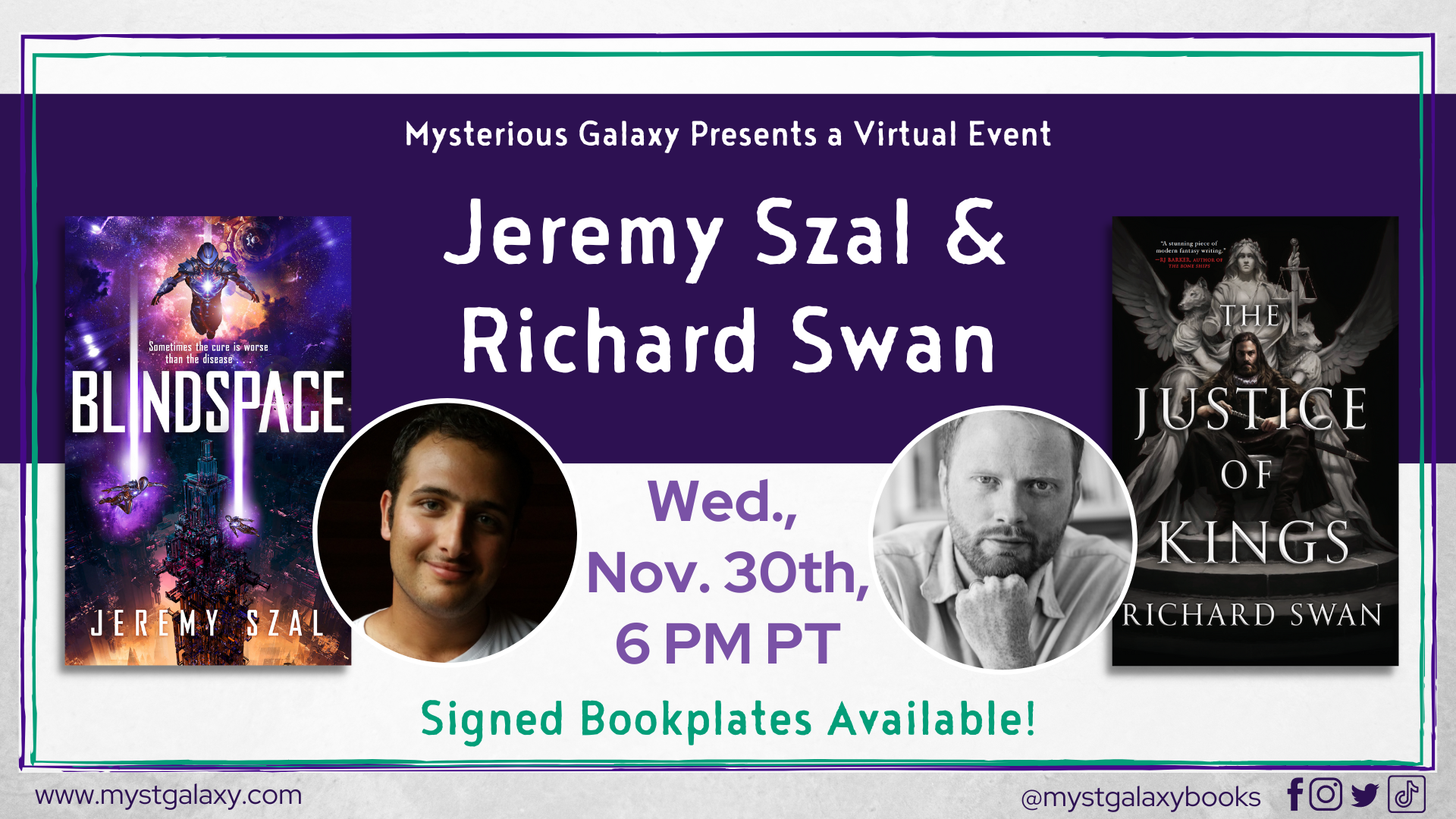 This virtual event with Jeremy Szal and Richard Swan is free to attend! We are offering signed bookplates for this event!

How to Order a Signed Bookplate from Jeremy Szal:

About the Authors
JEREMY SZAL was born in 1995 and was raised by wild dingoes, which should explain a lot. He spent his childhood exploring beaches, bookstores, and the limits of people’s patience. He’s the author of the Common trilogy from Gollancz, which includes STORMBLOOD, BLINDSPACE, and WOLFSKIN, about a drug harvested from alien DNA that makes users permanently addicted to adrenaline and aggression. He’s the author of over fifty science-fiction short stories, translated into six languages. He was the editor for the Hugo-winning StarShipSofa until 2020 and has a BA in Film Studies and Creative Writing from UNSW. He carves out a living in Sydney, Australia with his family. He loves watching weird movies, collecting boutique gins, exploring cities, cold weather, and dark humour. Find him at http://jeremyszal.com/ or @JeremySzal.

RICHARD SWAN is the author of the SUNDAY TIMES bestselling THE JUSTICE OF KINGS, the first book in the Empire Of The Wolf trilogy from Orbit Books. He was born in North Yorkshire, and, thanks to a childhood spent on RAF bases in Yorkshire and Lincolnshire, now has an unhealthy interest in fighter jets. In 2010 he moved to London, where he spent the better part of ten years litigating multi-million-pound commercial disputes. He now lives in Sydney with his wonderful wife, Sophie, their two very loud sons, and a very large container of sunscreen. For updates find him at www.stonetemplelibrary.com.

About BLINDSPACE
Vakov Fukasawa is a Reaper. An elite soldier injected with a dangerous drug called stormtech: the DNA of a genocidal alien race, the Shenoi. It makes him stronger, faster, more aggressive. At a price.

A price that, if the House of Suns cult isn't stopped, all of humanity will have to pay.

Vakov saved his estranged brother from the cult and killed their leader. Now they want his head on a spike, and they're hunting him and his friends down to get it, while continuing their mission to awaken the Shenoi and plunge the galaxy into mindless violence and chaos. There's a dangerous journey ahead, but Vakov and his misfit crew of eccentric aliens, troubled bounty hunters and rogue hackers will take any risk to stop the alien awakening. Only there's one risk Vakov hasn't shared: the one he himself poses. He got a terrifying glimpse of the Shenoi in the depths of interstellar space, and the violent nightmares he's suffered since suggest their DNA isn't just inside his body - he might already be fighting them for his mind . . .

About THE JUSTICE OF KINGS
The Empire of the Wolf simmers with unrest. Rebels, heretics, and powerful patricians all challenge the power of the Imperial throne.

Only the Order of Justices stands in the way of chaos. Sir Konrad Vonvalt is the most feared Justice of all, upholding the law by way of his sharp mind, arcane powers, and skill as a swordsman. At his side stands Helena Sedanka, his talented protégé, orphaned by the wars that forged the Empire.

When the pair investigates the murder of a provincial aristocrat, they unearth a conspiracy that stretches to the very top of Imperial society. As the stakes rise and become ever more personal, Vonvalt and Helena must make a choice: Will they abandon the laws they’ve sworn to uphold, in order to protect the Empire?

The Justice of Kings (Empire of the Wolf #1) (Paperback)

The Tyranny of Faith (Empire of the Wolf #2) (Hardcover)