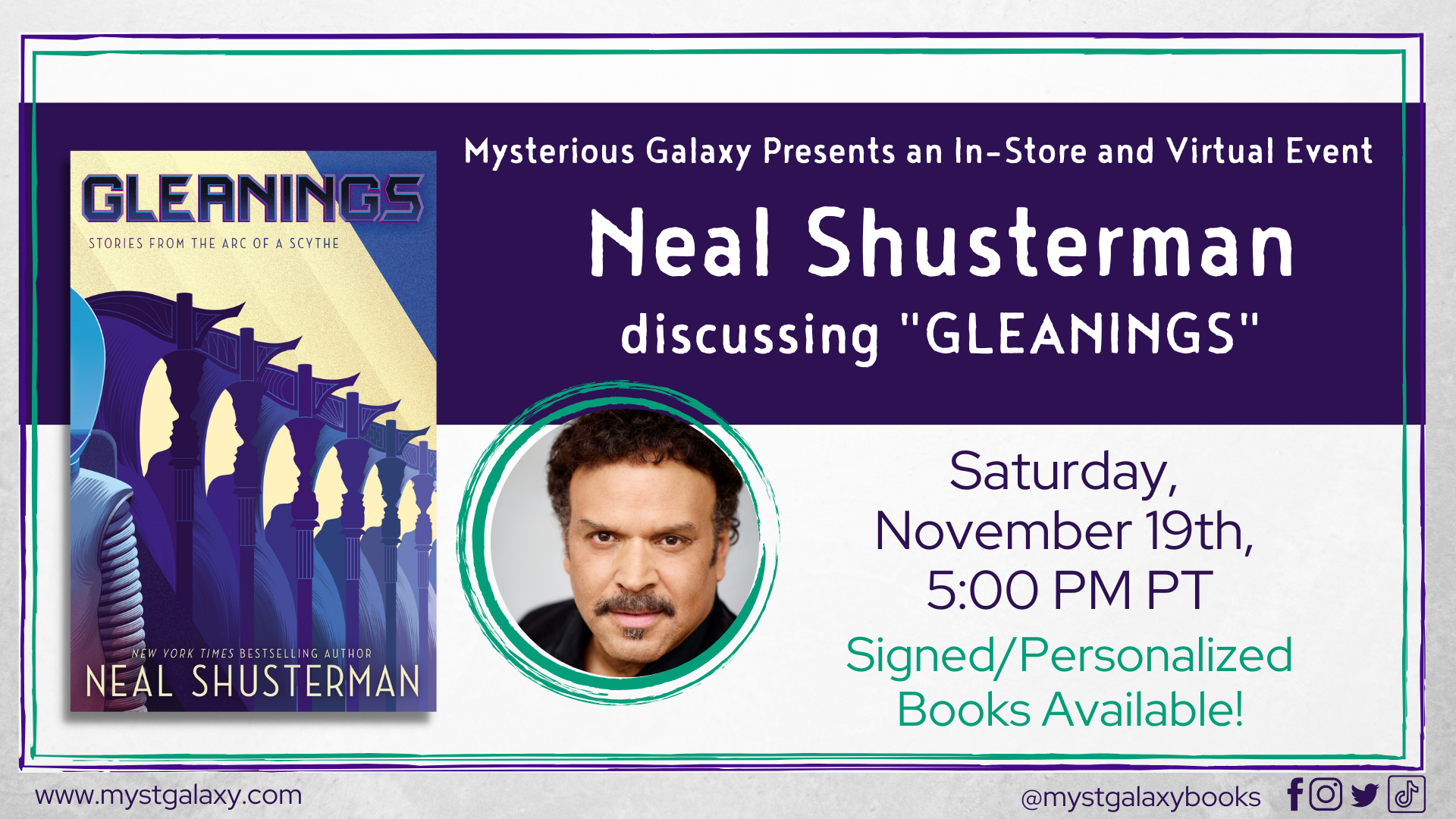 This is an IN-STORE EVENT that will also be broadcasted live through Crowdcast for those unable to attend in person. This event will consist of a 30 minute talk, followed by the book signing.

- ATTENDING THE EVENT IN PERSON:

Your Purchase of a GLEANINGS will get you Numbered Ticket for the signing portion of the event, which will take place after the discussion. Tell us in the comments section if you'll be attending the event so we can assign you a ticket. Those who don't have a ticket may still attend, but must wait at the end of the line to get their item(s) signed.

- NOT ATTENDING THE EVENT IN PERSON
Mysterious Galaxy's virtual events are hosted on Crowdcast. Click here to register for the event and here to view our virtual code of conduct. Accessibility: Real-time captioning for all Crowdcast events is available via Google Chrome. For enabling captions, please follow this guide. More info here.
How to Order a Signed/Personalized Book from Neal Shusterman if you're not attending the event
About the Author
NEAL SHUSTERMAN is the NEW YORK TIMES bestselling author of more than thirty award-winning books for children, teens, and adults, including the Unwind dystology, the Skinjacker trilogy, DOWNSIDERS, and CHALLENGER DEEP, which won the National Book Award. SCYTHE, the first book in his latest series, Arc of a Scythe, is a Michael L. Printz Honor Book. He also writes screenplays for motion pictures and television shows. Neal is the father of four, all of whom are talented writers and artists themselves. Visit Neal at StoryMan.com and Facebook.com/NealShusterman.
About GLEANINGS
There are still countless tales of the Scythedom to tell. Centuries passed between the Thunderhead cradling humanity and Scythe Goddard trying to turn it upside down. For years humans lived in a world without hunger, disease, or death with Scythes as the living instruments of population control.

Neal Shusterman—along with collaborators David Yoon, Jarrod Shusterman, Sofía Lapuente, Michael H. Payne, Michelle Knowlden, and Joelle Shusterman—returns to the world throughout the timeline of the Arc of a Scythe series. Discover secrets and histories of characters you’ve followed for three volumes and meet new heroes, new foes, and some figures in between.

Gleanings: Stories from the Arc of a Scythe (Hardcover)

Thunderhead (Arc of a Scythe #2) (Paperback)