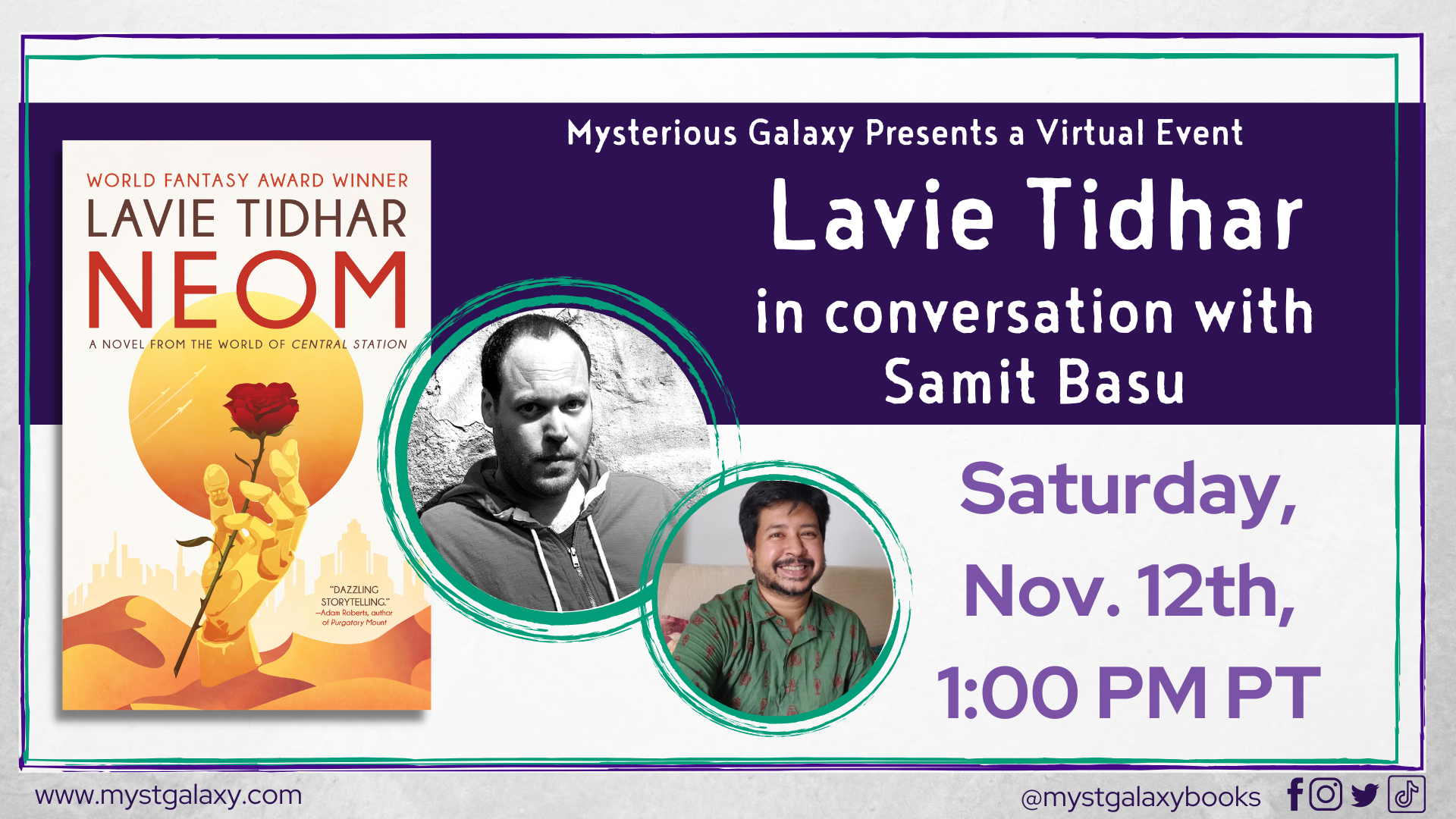 Lavie Tidhar in discussion with Sami Basu
A Virtual Event

This virtual event with Lavie Tidhar, in conversation with Samit Basu, is free to attend! However, all purchases of NEOM or any other of his available books will come with a signed bookplate (while supplies last).

To get on the list for a bookplate, just add any of Lavie's available books to your cart and put that you’d like a bookplate in the order comments on the checkout screen. The deadline to place an order to guarantee a bookplate is one week after the event, November 19th. Please note, since it typically takes several weeks after an event for the bookplates to arrive at the store, your bookplate may be sent to you separately from the book.

About the Authors
British Science Fiction, British Fantasy, and World Fantasy Award–winning author LAVIE TIDHAR (A MAN LIES DREAMING, UNHOLY LAND) is an acclaimed author of literature, science fiction, fantasy, graphic novels, and middle grade fiction. Tidhar received the John W. Campbell, Xingyun, and Neukom Literary awards for the novel CENTRAL STATION, which has been translated into more than ten languages. He is a book columnist for the WASHINGTON POST and recently edited the BEST OF WORLD SCIENCE FICTION anthology. Tidhar currently resides with his family in London.

SAMIT BASU is an Indian novelist. He's published several novels in a range of speculative genres, all critically acclaimed and bestselling in India, beginning with THE SIMOQIN PROPHECIES (2003). THE CITY INSIDE was shortlisted (as CHOSEN SPIRITS) for the JCB Prize, India’s biggest literary award. He also works as a director-screenwriter (Netflix, 2019), a comics writer, and a columnist. He lives in Delhi, Mumbai, and on the internet.

About NEOM
The city known as Neom is many things to many beings, human or otherwise. Neom is a tech wonderland for the rich and beautiful; an urban sprawl along the Red Sea; and a port of call between Earth and the stars.

In the desert, young orphan Elias has joined a caravan, hoping to earn his passage off-world from Central Station. But the desert is full of mechanical artefacts, some unexplained and some unexploded. Recently, a wry, unnamed robot has unearthed one of the region's biggest mysteries: the vestiges of a golden man.

In Neom, childhood affection is rekindling between loyal shurta-officer Nasir and hardworking flower-seller Mariam. But Nasu, a deadly terrorartist, has come to the city with missing memories and unfinished business.

Just one robot can change a city's destiny with a single rose--especially when that robot is in search of lost love.

Neom: A Novel from the World of Central Station (Paperback)

An Occupation of Angels (Paperback)

The City Inside (Hardcover)