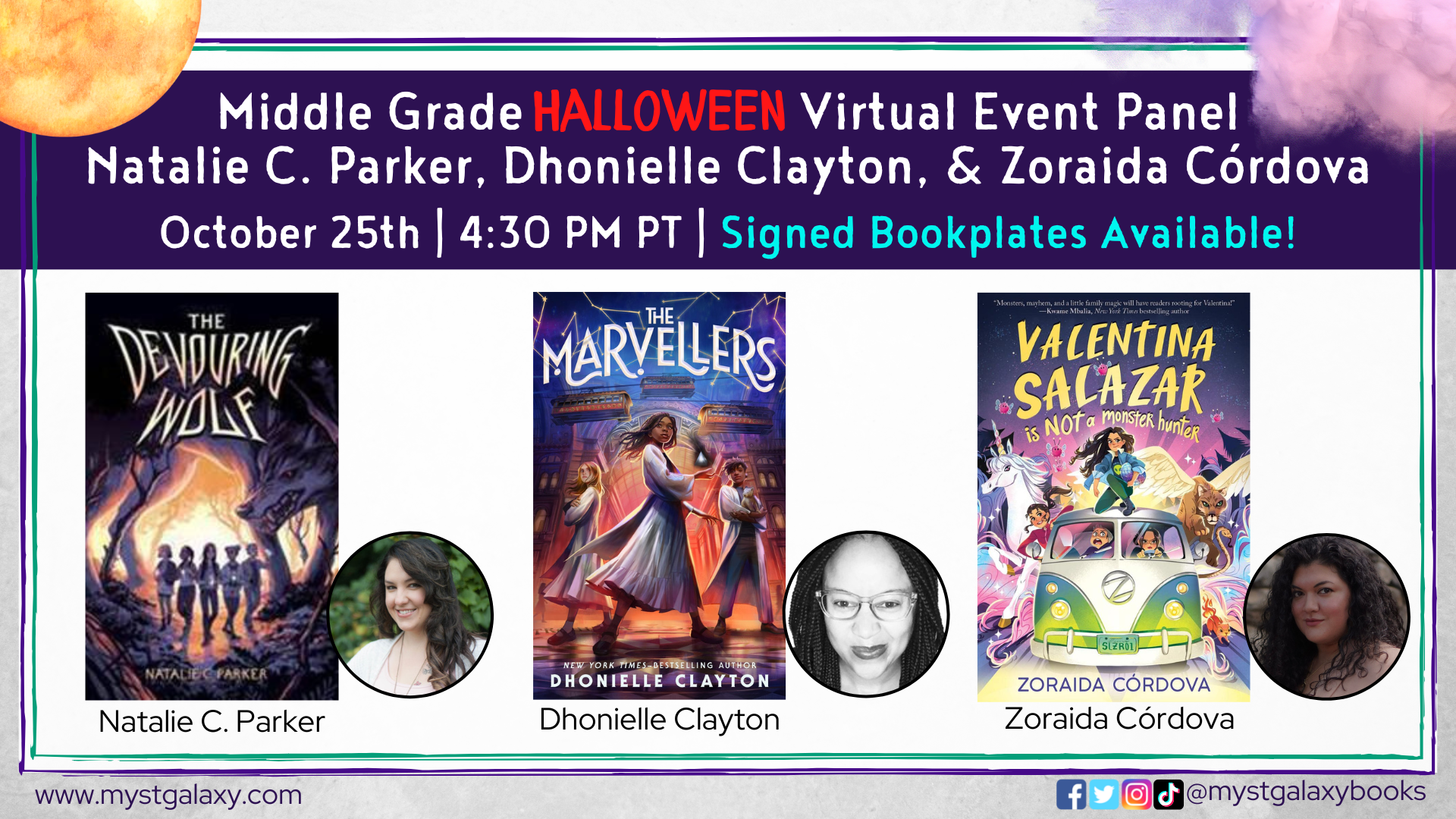 This virtual event with Natalie C. Parker, Dhonielle Clayton, and Zoraida Córdova is free to attend! We are offering signed bookplates for this event!

How to Order a Signed Bookplate from Natalie C. Parker, Dhonielle Clayton, and/or Zoraida Córdova:

About the Authors
NATALIE C. PARKER is the author and editor of several books for young adults, among them the acclaimed Seafire trilogy. Her work has been included on the NPR Best Books list, the Indie Next List, the TAYSHAS Reading List, and Junior Library Guild selections. Natalie grew up in a Navy family, finding home in coastal cities from Virginia to Japan. Now she lives with her wife on the Kansas prairie. Find her at nataliecparker.com.

DHONIELLE CLAYTON spent most of her childhood under her grandmother's table with a stack of books. She hails from the Washington, D.C. suburbs on the Maryland side. She is the NEW YORK TIMES-bestselling author of The Belles series, SHATTERED MIDNIGHT, co-author of BLACKOUT, and the co-author of THE RUMOR GAME and the Tiny Pretty Things duology, a Netflix original series. She taught secondary school for several years, and is a former elementary and middle school librarian. She is COO of the non-profit We Need Diverse Books, and President of Cake Creative, an IP story kitchen dedicated to diverse books for all ages. She’s an avid traveler, and always on the hunt for magic and mischief. Her new book, The Marvellers, is her middle-grade fantasy debut.

ZORAIDA CÓRDOVA is the acclaimed author of more than two dozen novels and short stories, including the Brooklyn Brujas series, STAR WARS: THE HIGH REPUBLIC: CONVERGENCE, and THE INHERITANCE OF ORQUÍDEA DIVINA. In addition to writing novels, she serves on the board of We Need Diverse Books, and is the co-editor of the bestselling anthology VAMPIRES NEVER GET OLD, as well as the cohost of the writing podcast, Deadline City. She writes romance novels as Zoey Castile. Zoraida was born in Guayaquil, Ecuador, and calls New York City home. When she’s not working, she’s roaming the world in search of magical stories. For more information, visit her at zoraidacordova.com.

It's the eve of the first full moon of summer and twelve-year-old Riley Callahan is ready to turn into a wolf. Nothing can ruin her mood: not her little brother Milo’s teasing, not Mama N’s smoth-ering, and not even Mama C’s absence from their pack’s ceremony. But then the unthink-able happens—something that violates every rule of wolf magic—Riley and four other kids don’t shift.

Riley is left with questions that even the pack leaders don’t have answers to. And to make matters far worse, it appears something was awoken in the woods that same night.

The elders tell the tale of the Devouring Wolf to scare young pups into obedience. It’s a terrifying campfire story for fledging wolves, an old legend of a giant creature who consumes the magic inside young werewolves. But to Riley, the Devouring Wolf is more than lore: it’s real and it’s after her and her friends.

About THE MARVELLERS
Eleven-year-old Ella Durand is the first Conjuror to attend the Arcanum Training Institute, a magic school in the clouds where Marvellers from around the world practice their cultural arts, like brewing Indian spice elixirs and bartering with pesky Irish pixies.

Despite her excitement, Ella discovers that being the first isn’t easy—some Marvellers mistrust her magic, which they deem “bad and unnatural.” But eventually, she finds friends in elixirs teacher, Masterji Thakur, and fellow misfits Brigit, a girl who hates magic, and Jason, a boy with a fondness for magical creatures.

When a dangerous criminal known as the Ace of Anarchy escapes prison, supposedly with a Conjuror’s aid, tensions grow in the Marvellian world and Ella becomes the target of suspicion. Worse, Masterji Thakur mysteriously disappears while away on a research trip. With the help of her friends and her own growing powers, Ella must find a way to clear her family’s name and track down her mentor before it’s too late.

About VALENTINA SALAZAR IS NOT A MONSTER HUNTER
It takes a special person to end up in detention on the last day of school.

It takes a REALLY special person to accidentally burn down the school yard while chasing a fire-breathing chipmunk.

But nothing about Valentina Salazar has ever been “normal.” The Salazars are protectors, tasked with rescuing the magical creatures who sometimes wander into our world, from grumpy unicorns to chupacabras . . . to the occasional fire-breathing chipmunk.

When Val’s father is killed during a rescue mission gone wrong, her mother decides it’s time to retire from their life on the road. She moves the family to a boring little town in upstate New York and enrolls Val and her siblings in real school for the first time.

But Val is a protector at heart and she can’t give up her calling. So when a mythical egg surfaces in a viral video, Val convinces her reluctant siblings to help her find the egg before it hatches and wreaks havoc. But she has some competition: the dreaded monster hunters who’ll stop at nothing to destroy the creature . . . and the Salazar family

Valentina Salazar is not a Monster Hunter (Hardcover)

The Everlasting Rose (The Belles series, Book 2) (Belles, The) (Paperback)

The Inheritance of Orquídea Divina: A Novel (Paperback)