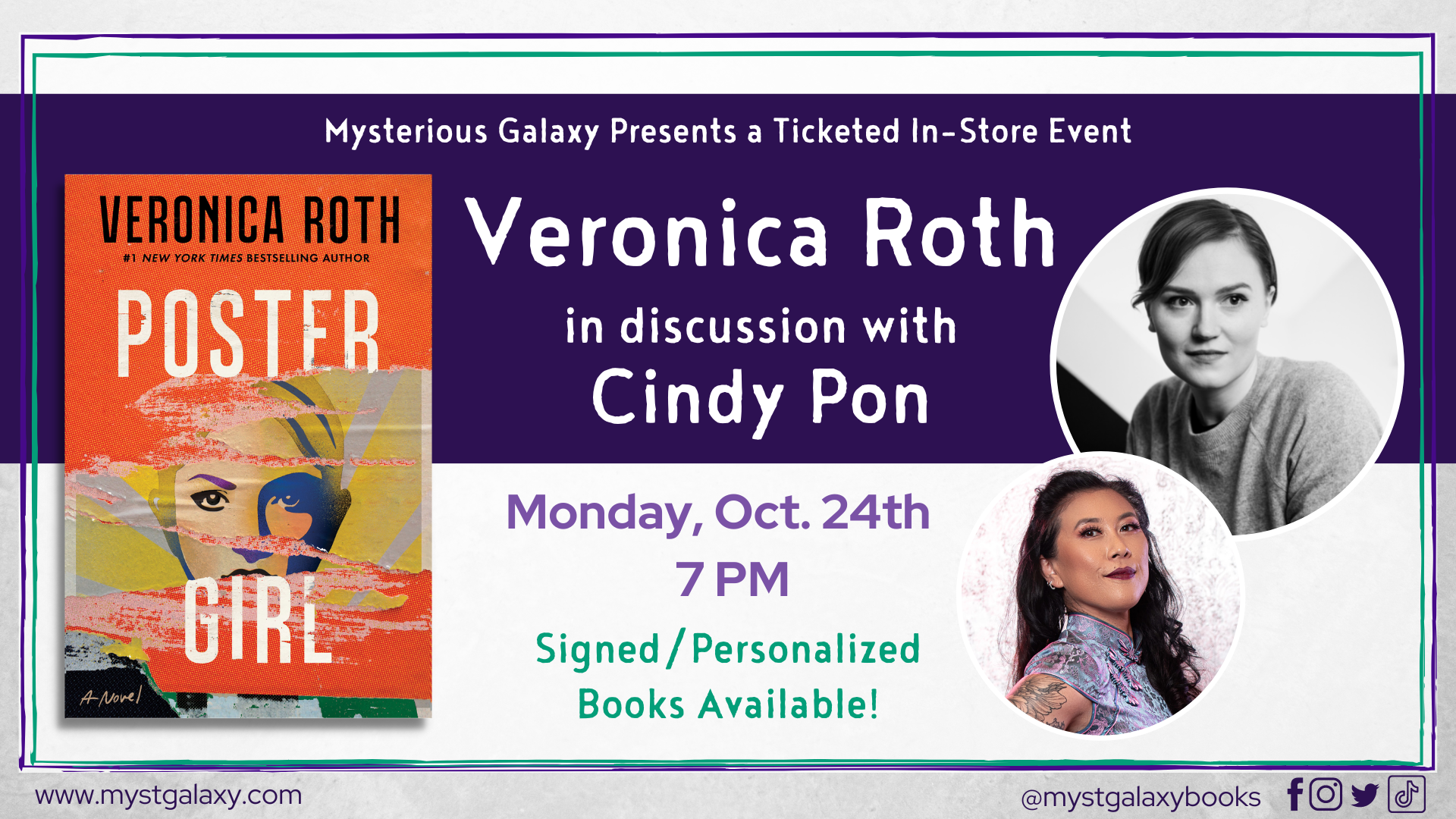 This ticketed event (limited to 200 people max) will consist of a 30-minute discussion with author Veronica Roth and Cindy Pon, a question and answer section, and lastly the book signing portion for anyone wanting personalizations or signatures/personalizations of their personal items (only 3 items per attendee that are not copies of POSTER GIRL can be signed/personalized.). All the stock we will have available of Veronica's will already be signed. Only those with tickets may attend the event.

Your purchase of POSTER GIRL will come with a presigned copy of the book and an attendee ticket for the event. This ticket does not guarantee a seat, as seating will be limited. Please arrive early to avoid standing for the event.

How to Order a Signed/Personalized Book from Veronica Roth if you're not attending the event:

Attending from out of state?  Put the store's address (3555 Rosecrans St, Ste 107A, San Diego CA 92110) as the "shipping address" when checking out to activate the pickup option!

About the Authors
VERONICA ROTH is the #1 NEW YORK TIMES best-selling author of the Divergent series (DIVERGENT, INSURGENT, ALLEGIANT, and FOUR: A DIVERGENT COLLECTION) and the Carve the Mark duology (CARVE THE MARK, THE FATES DIVIDE). DIVERGENT received the 2011 Goodreads Choice Award for Favorite Book, PUBLISHERS WEEKLY’S Best Book of 2011, and was the winner of the YALSA 2012 Teens’ Top Ten. The trilogy has been adapted into a blockbuster movie series starring Shailene Woodley and Theo James. CARVE THE MARK published in January 2017, debuted at #1 on the NEW YORK TIMES bestseller list, and remained on the list for eighteen weeks. THE FATES DIVIDE, the second installment of the Carve the Mark series, also debuted at #1 on the NEW YORK TIMES bestseller list. She is a board member of YALLFest, the biggest YA book festival in the country, and YALLWEST, its sister festival. She currently lives in Chicago with her husband and their dog, Avi, whose adorable existence is well-documented on Instagram (@veronicaroth).

CINDY PON is the author of the young adult sci-fi and Andre Norton finalist WANT, as well as the fantasy duologies SILVER PHOENIX and SERPENTINE. She attended Revelle at UCSD and fell in love with San Diego as an undergrad. In her free time, she works on her bench press and deadlifts, loves watching movies and indulging in delicious pastries and desserts. Mysterious Galaxy is her favorite bookstore.

Sonya Kantor knows this slogan—she lived by it for most of her life. For decades, everyone in the Seattle-Portland megalopolis lived under it, as well as constant surveillance in the form of the Insight, an ocular implant that tracked every word and every action, rewarding or punishing by a rigid moral code set forth by the Delegation.

Then there was a revolution. The Delegation fell. Its most valuable members were locked in the Aperture, a prison on the outskirts of the city. And everyone else, now free from the Insight’s monitoring, went on with their lives.

Sonya, former poster girl for the Delegation, has been imprisoned for ten years when an old enemy comes to her with a deal: find a missing girl who was stolen from her parents by the old regime, and earn her freedom. The path Sonya takes to find the child will lead her through an unfamiliar, crooked post-Delegation world where she finds herself digging deeper into the past—and her family’s dark secrets—than she ever wanted to.

Attending from out of state?  Put the store's address (3555 Rosecrans St, Ste 107A, San Diego CA 92110) as the "shipping address" when checking out to activate the pickup option!

The End and Other Beginnings: Stories from the Future (Paperback)