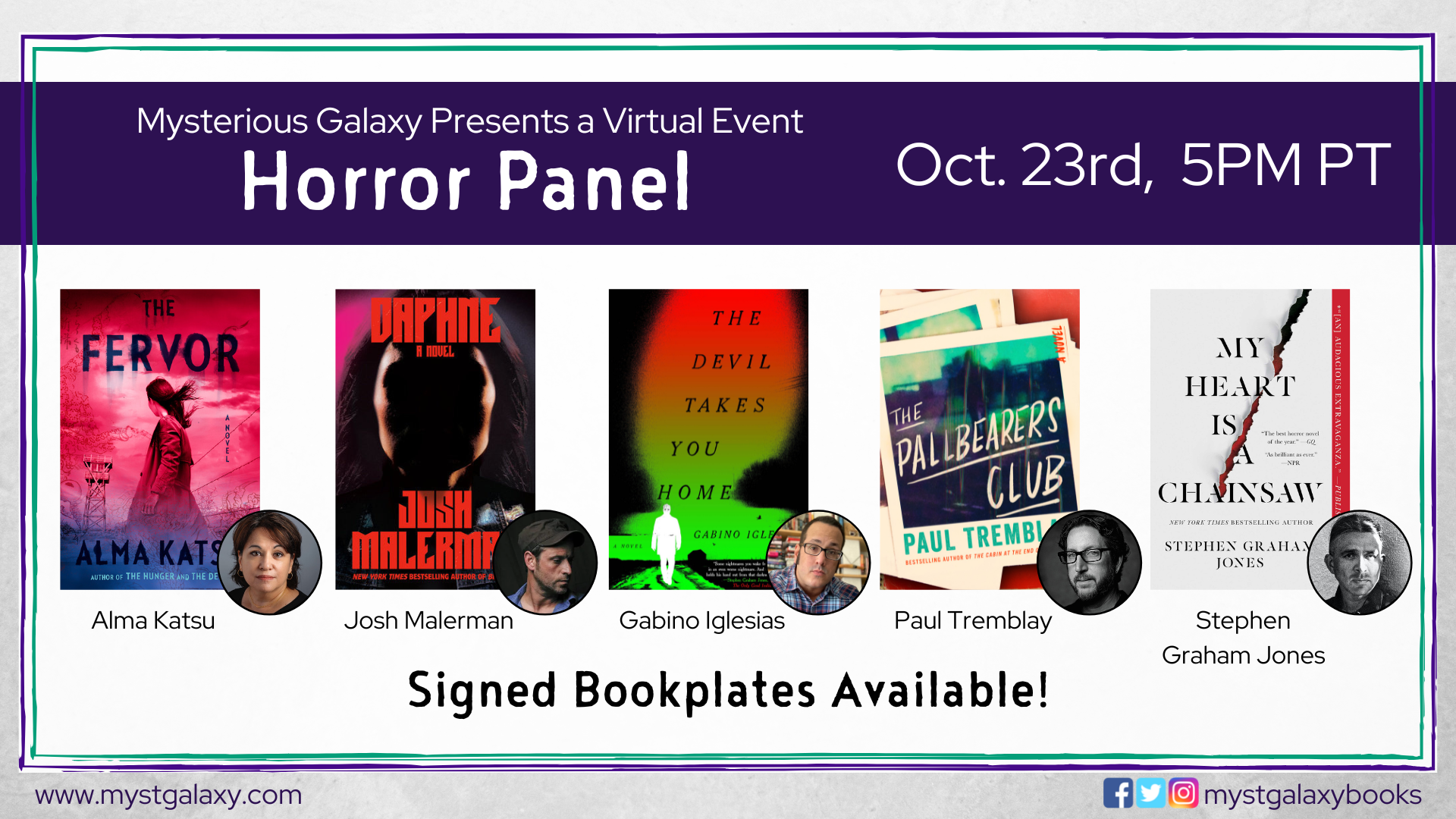 We still have signed copies of Gabino Iglesias' THE DEVIL TAKES YOU HOME, and other titles!
How to Order a Signed copy of THE DEVIL TAKES YOU HOME (or the other listed titles of his on this page) from Gabino Iglesias (while supplies last)
About the Authors
ALMA KATSU is the author of seven novels. She has been twice nominated for both the Stoker and Locus Awards for best horror novel, nominated numerous times for Goodreads’ Reader Choice awards, and appeared on the Observer, Apple Books, Amazon, Barnes & Noble and other outlets’ best book lists. THE HUNGER, which the NYT called it “supernatural suspense at its finest”, was named one of NPR’s 100 favorite horror stories, and won Spain’s Kelvin 505 award for best scifi/fantasy/horror novel and the Western Heritage Award for best novel. RED WIDOW, her first espionage novel, was a NYT Editor’s Choice pick, has been nominated for the International Thriller Writers’ award for best novel, and is currently in development for a TV series. Her debut novel, THE TAKER, was one of Booklist’s top ten debut novels of 2011.
JOSH MALERMAN is a NEW YORK TIMES bestselling author and one of two singer-songwriters for the rock band The High Strung. His debut novel, BIRD BOX, was the inspiration for the hit Netflix film of the same name. His other novels include UNBURY CAROL, INSPECTION, A HOUSE AT THE BOTTOM OF A LAKE, and MALORIE, the sequel to BIRD BOX. Malerman lives in Michigan with his fiancée, the artist/musician Allison Laakko.
GABINO IGLESIAS is a writer, journalist, professor, and literary critic living in Austin, TX. He is also the author of the critically acclaimed and award-winning novels ZERO SAINTS and COYOTE SONGS. Iglesias' nonfiction has appeared in the NEW YORK TIMES, the LOS ANGELES TIMES, ELECTRIC LITERATURE, and Litreactor, and his reviews appear regularly in places like NPR, PUBLISHERS WEEKLY, the SAN FRANCISCO CHRONICLE, the BOSTON GLOBE, CRIMINAL ELEMENT, MYSTERY TRIBUNE, VOL. 1 BROOKLYN, and the LOS ANGELES REVIEW OF BOOKS. He's been a juror for the Shirley Jackson Awards twice and the Millions Tournament of Books, and is a member of the Horror Writers Association, the Mystery Writers of America, and the National Book Critics Circle.

PAUL TREMBLAY has been the recipient of the Bram Stoker, British Fantasy, and Massachusetts Book Awards and is the author of SURVIVOR SONG, GROWING THINGS AND OTHER STORIES, THE CABIN AT THE END OF THE WORLD, DISAPPEARANCE AT DEVIL’S ROCK, A HEAD FULL OF GHOSTS, and the crime novels THE LITTLE SLEEP and NO SLEEP TILL WONDERLAND. He lives outside Boston with his family.

STEPHEN GRAHAM JONES is the New York Times bestselling author of nearly thirty novels and collections, and there’s some novellas and comic books in there as well. Most recent are The Only Good Indians and My Heart is a Chainsaw. Up next is Don’t Fear the Reaper. Stephen lives and teaches in Boulder, Colorado

Malorie: The Sequel to the Global Sensation Bird Box (Paperback)

The Devil Takes You Home: A Novel (Hardcover)

Both Sides: Stories from the Border (Hardcover)

The Pallbearers Club: A Novel (Hardcover)

My Heart Is a Chainsaw (The Indian Lake Trilogy #1) (Hardcover)

The Only Good Indians: A Novel (Paperback)