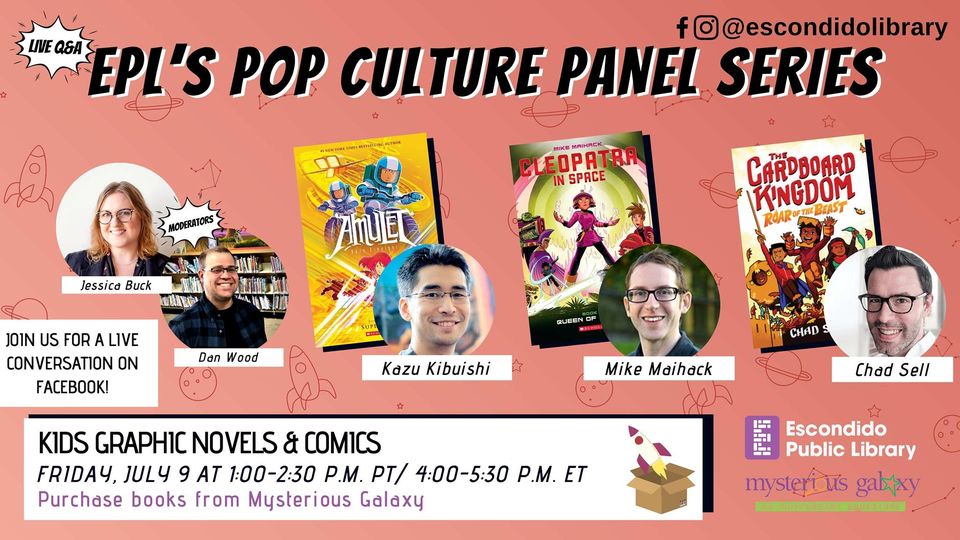 We will be taking questions from the viewers.
View our virtual event code of conduct here. Please note that it applies to all attendees, authors, and moderators and is to ensure our event spaces stay a positive, welcoming place for respectful discussions and multiple perspectives.

Kazu Kibuishi is the creator of the #1 New York Times bestselling Amulet series, which is available in 16 languages. He is also the creator of Copper, a collection of his popular webcomic that features an adventuresome boy-and-dog pair. Kazu also illustrated the covers of the 15th anniversary paperback editions of the Harry Potter series written by J.K. Rowling. He lives and works near Seattle, Washington, with his wife, Amy Kim Kibuishi, and their children. Visit Kazu online at boltcity.com

Mike Maihack is the creator of the Cleopatra in Space series. Book One: Target Practice won a Florida Book Award and was a YALSA Quick Pick for Reluctant Young Adult Readers. He is also the creator of the popular webcomic Cow & Buffalo and has contributed to books like Sensation Comics Featuring Wonder Woman; Parable; Jim Henson's The Storyteller; Cow Boy; Geeks, Girls, and Secret Identities; and Comic Book Tattoo. Mike lives with his wife, two sons, and Siamese cat in Land O' Lakes, Florida. Visit him online at mikemaihack.com.

Chad Sell's first children's graphic novel was The Cardboard Kingdom, which he illustrated and co-wrote with a team of ten collaborators. This same team came together again to create The Cardboard Kingdom: Roar of the Beast. Chad's first full-length solo project, Doodleville, is set in Chicago, where he lives with his husband and two cats. @chadsell01

About The Books
Supernova (Amulet #8)
Kazu Kibuishi's thrilling #1 New York Times bestselling series continues!
Emily has lost control of her Amulet and is imprisoned in the Void, where she must find a way to escape the influence of the Voice. Meanwhile, Emily's brother, Navin, travels to Lighthouse One, a space station where the Resistance is preparing to battle the approaching Shadow forces that would drain planet Alledia of all its resources. Emily and Navin must be smarter and stronger than ever to ensure Alledia's survival.

Queen of the Nile (Cleopatra in Space #6)
The conclusion to Mike Maihack's thrilling graphic novel series starring a young Cleopatra and her adventures in space!
The time has come for Cleo to fulfill the ancient prophecy that declares her a savior and a hero, a prophecy she still struggles to accept. Cleo is joined by old and new friends as they fight to defend the galaxy she's come to call home against the evil Xaius Octavian. The Queen of the Nile must summon the strength to face down her enemy one last time, and keep her friends -- and herself -- alive. Now a TV series on NBCUniversal's streaming service, Peacock!

The Cardboard Kingdom #2: Roar of the Beast
A mystery is afoot in the Cardboard Kingdom.
Vijay, the Beast, renounces his title after being bullied by neighborhood teenagers. No one--not his big sister Shikha or his friends--can seem to draw him back out of his shell.
That very night is when it starts. At first, no one believes Nate, who breaks his leg trying to pursue what he saw from his bedroom window. But then there's another, and another. An unknown monster has been spotted roaming the Kingdom after dark. It's ghastly, it's quick, and it might even have giant tentacles. Or claws. Or wings. Okay, there might be some varied testimonies on what exactly this monster looks like.
Forget Halloween--the newly minted Monster Mashers will go to any lengths to protect the Kingdom and uncover this mystery. But how did the monster get here? What does it want? And mostly importantly, who is behind its creation?

Queen of the Nile: A Graphic Novel (Cleopatra in Space #6) (Paperback)

The Cardboard Kingdom #2: Roar of the Beast (Hardcover)