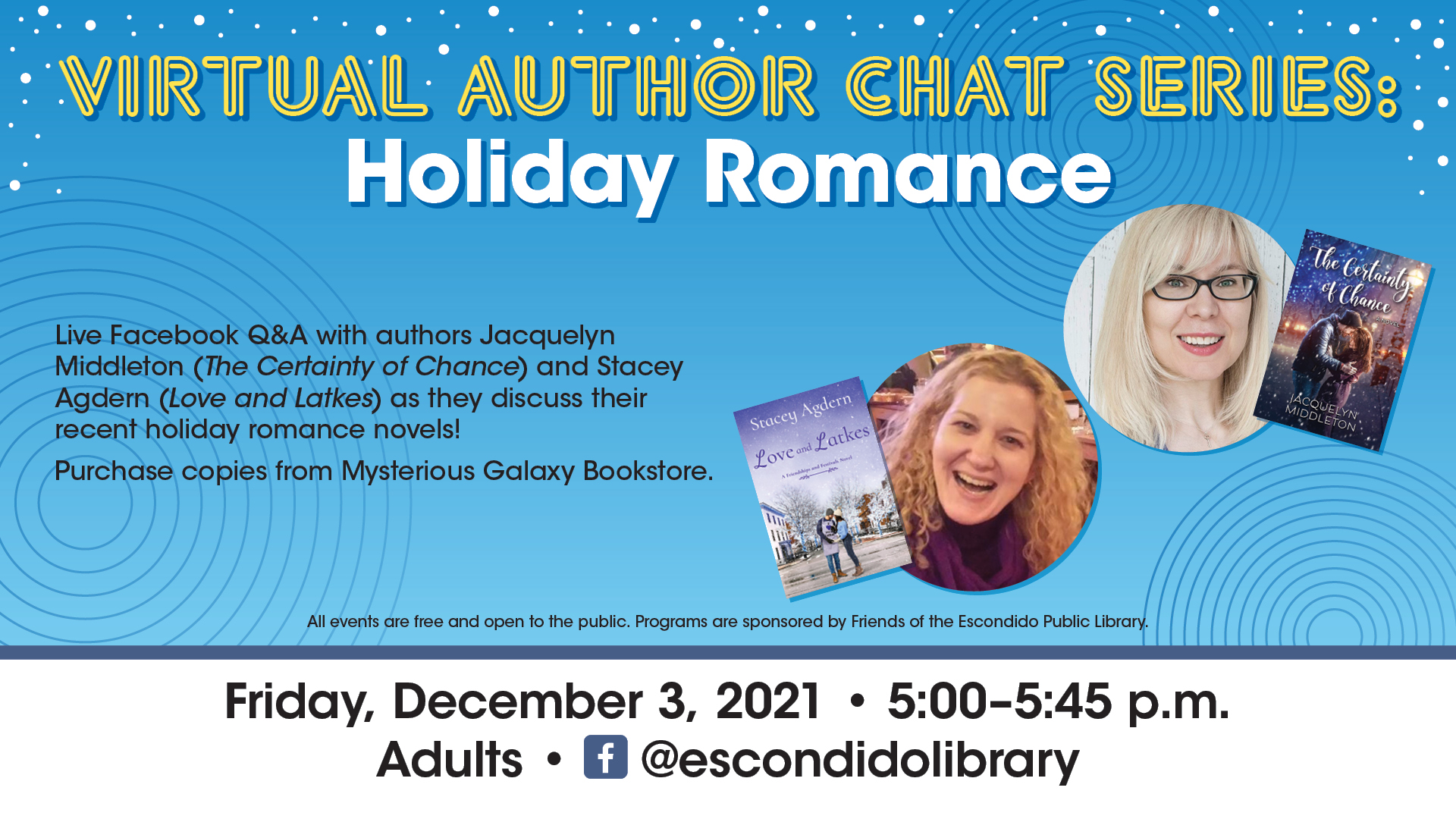 Join us on Facebook for a live Q&A with authors Jacquelyn Middleton (THE CERTAINTY OF CHANCE) and Stacey Agdern (LOVE AND LATKES) as they discuss their recent holiday romance novels!

View our virtual event code of conduct here. Please note that it applies to all attendees, authors, and moderators and is to ensure our event spaces stay a positive, welcoming place for respectful discussions and multiple perspectives.

Stacey Agdern has written for: ‘HEA' (Happily Ever After) USA today’s online romance blog, Heroes and Heartbreakers, Criminal Element, Romance at Random, Romantic Times Magazine and Barbara Vey’, Beyond Her Book, column at Publishers Weekly Online Site.  She has been interviewed by the New York Times for her romance genre expertise and the phenomenal success of 50 Shades of Grey.  She has also given presentations on the effective use of booksellers at regional and national conferences and is a two time award winner for her genre specific book selling. She is a very proud member of both LIRW and RWA NYC where she previously held the chapter position of Vice President for one term. She lives not very far from her favorite hockey team’s practice facility in New York City.

Jacquelyn Middleton is a multi-award-winning author of love stories for hopeful romantics-'hopeful' because her novels are always optimistic and she believes 'happily ever afters' are more important now than ever before. But life is messy, relationships are messy, and her books aren't afraid to go there, too. If you enjoy character and relationship-driven stories about people dealing with the triumphs and disasters we all face, Jacquelyn's books are for you.  A life-long Maple Leafs fan and Anglophile, Jacquelyn previously worked in television broadcasting and as an award-winning freelance writer. She loves comic cons, London, and theatre, and lives in Toronto with her British husband and her Japanese Spitz dog.

About the Books
Love and Latkes: You can’t make a latke without breaking a few eggs…
Batya Averman is ecstatic when a latke fry-off committee chooses her as its web designer—until she learns the event is in Rivertown, New York, the hometown she fled years ago. But she’s no longer the girl with an embarrassing history and an unrequited crush on Abe Neumann. This delicious competition is Batya’s chance to further her career, and this time she won’t run.
Abe Neumann can’t pass up the opportunity to enter the town’s latke contest. He dreams of throwing caution to the wind and leaving his accounting firm, opening a Jewish deli, and choosing his own happiness. The prize money would bring him closer to making his dream a reality, but when Batya comes back to town, Abe remembers that a deli isn’t the only thing he’s wished for.
When the fry-off’s celebrity host has to pull out of the competition, Batya is determined to step up to the challenge. This Hanukkah, can Abe fix the past and convince Batya that dreams, like latkes, are better when they’re shared?

The Certainty of Chance: THERE'S SOMETHING ABOUT DECEMBER…
Madeleine Joy is feeling more meh than merry. When an Icelandic volcano erupts six days before Christmas, hazardous ash congests European airspace, canceling flights indefinitely—including the thirtysomething's connection to Paris. Stranded alone in London, separated from her sister, and with the devastating one-year anniversary of her best friend’s tragic death just days away, Madeleine has never felt less festive. And as if things couldn’t get worse, the cute guy driving the cab to her hotel won’t shut up about carolers and tinsel…
Julian Halliwell is one of life’s sunny optimists. A former music journalist, he’s embraced his love for London by starting his own black cab business, enthusiastically ferrying passengers from one historic landmark to another. But life hasn’t always been easy for Julian. Having navigated several life-changing setbacks including a cruel betrayal by his former fiancée, Julian remains hopeful that he’ll meet somebody kind, who shares his love of music, his corgi named Winnie, and of course, the magic of Christmas time in London.
Despite being an unlikely match, fate seems determined to throw them together. But can the grieving American find joy again in a world where the lights have all but dimmed?

The Certainty of Chance (Paperback)

History of Us (Paperback)