Postjournalism and the death of newspapers. The media after Trump: manufacturing anger and polarization (Paperback) 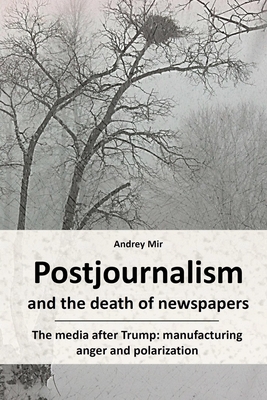 - "Postjournalism and the Death of Newspapers" may be the most profound analysis of the subject since the last time Marshall McLuhan wrote about it. Mir describes a universe in which the news now chases the reader rather than the other way around. Everything is told in a wonderful epigrammatic style - you will be digging up quotes from it for years. - Martin Gurri, author of "The Revolt of the Public". - The most important book in media theory that has been written in 40 years. - Paul Levinson, author of "Digital McLuhan". - Andrey Mir's "Postjournalism" offers a powerful, sweeping narrative of how news media have evolved over the centuries. - Arnold Kling, economist, author of "Crisis of Abundance" and "Invisible Wealth". - In his book "Postjournalism and the Death of Newspapers", Mir is here partly to praise newspapers, partly to bury them, but mostly to explain why their death is (a) inevitable and (b) a very big deal. He communicates this with a history of news media and a blizzard of concepts and neologisms. - Danyl Mclauchlan, "The Spinoff," New Zealand. - As Mir argues, this change in the economic structure of the news media has quietly transformed journalism from a theoretically neutral means of "manufacturing consent" into a political cause that people are rallied into supporting, usually by inciting them to some form of outrage. - Murtaza Hussain, "The Intercept". ...Hundreds of thousands of today's students have never even touched a newspaper. The market is already ready to drop newspapers, but society is not yet. The last newspaper generation's habits will preserve at least some demand for newspapers for a while. Newspapers will exist as an industrial product for no longer than the mid-2030s. Some vintage use of newspapers may remain afterwards, but it will be a matter of arts, not industry.
The least obvious and yet most shocking aspect of the newspapers' decline is the fact that it reflects the fate of journalism, not just a carrier. This is neither a cyclical crisis nor a matter of transition; this is the end of an era.
"Postjournalism and the death of newspapers" unveils the economic and cultural mechanisms of agenda-setting in the news media at the final stage of their historical existence. As advertising has fled to the internet and was absorbed there almost entirely by the Google-Facebook duopoly, the news media have been forced to switch to another source of funding - selling content to readers. However, they cannot sell news because news is already known to people from social media newsfeeds. Instead, the media offers the validation of already-known news within a certain value system and the delivery of the "right" news to others.
This business necessity forces the media to relocate the gravity of their operation from news to values. Media outlets are increasingly soliciting subscriptions as donations to a cause. To attract donations, they have to focus on "pressing social issues". The need to pursue reader revenue and therefore the dependence on the audience, with the news no longer being a commodity, is pushing journalism to mutate into postjournalism. Journalism wants its picture to match the world; postjournalism wants the world to match its picture.
The ad-driven media manufactured consent. The reader-driven media manufactures anger. The former served consumerism. The latter serves polarization.
The author explores polarization as a media effect. Andrey Mir (Andrey Miroshnichenko) is a media scholar and journalist with twenty years in the print media. He is the author of "Human as Media. The Emancipation of Authorship" (2014) and a number of books on media and politics. Twitter: @Andrey4Mir.