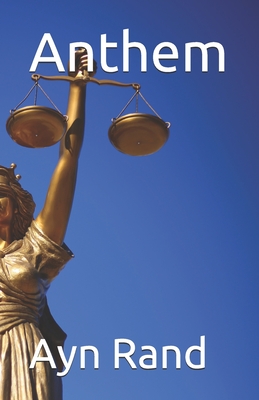 Anthem is a novella by American writer Ayn Rand, first published in Great Britain in 1938 and revised for its first American edition in 1946. The novel is set in some unspecified time and place in the future, many years after human civilization has undergone a cataclysm in which all knowledge was lost and a primitive, rigidly collectivist society was established. In this society, there is no concept of individuality. Even the word "I" has disappeared from the language. The novel describes the efforts of the main character, Equality 7-2521, to reestablish a sense of personal identity and restore the knowledge of the past by objective scientific inquiry. In doing so, he must face many dangers and privations.Although Anthem did not attract much attention on first publication, the success of Rand's later novels gave it a boost, and it has maintained its popularity for nearly half a century. By the early twenty-first century, 3,500,000 copies had been sold, and 100,000 copies are sold every year. Anthem is especially popular among young people, including high school and college students, who see in Equality's struggle to attain a meaningful sense of self a model for their own emergence into maturity. The novella remains important as an expression of the dangers of totalitarian societies and the importance of individual creativity and political freedom.