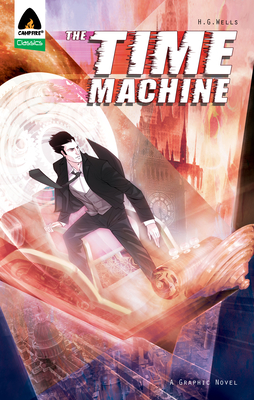 A concise, highly enjoyable adaptation of the classic novella; one of more than 85 titles Campfire has published since their introduction to North America in 2010.

What would you do if you could travel in time?

An intrepid adventurer, known simply as the Time Traveller, meets his friends for dinner one night. During the conversation, he baffles them with his wild ideas about moving forwards or backwards in time. His claims are met with disbelief. Even when he proves his theory with a real-life experiment, his associates simply claim that he is a trickster - a magician. Yet, a week later, he enthralls his acquaintances yet again. He tells a story so unbelievable that it can't be true... or can it?

The Time Traveller's tale tells of our courageous explorer's discoveries in another time. Does he find intelligence and technology beyond his wildest dreams? Or is the world filled with dreaded monsters? There's only one way to find out...

Lewis Helfand is a resident of Narberth, Pennsylvania and grew up wanting to write comic books. His journey to figure out how to do that has involved everything from studying sculpture and politics to traveling through Spain and Denmark to writing about adventure sports and sword making. He is currently merging all these diverse interests writing graphic novels for Campfire. Some of his recent titles include the award-winning Nelson Mandela, Mother Teresa, They Changed The World: Edison-Tesla-Bell and Crick & Watson, World War Two: Under the Shadow of the Swastika and The Industrial Revolution.

Lines and colors have been a part of Rajesh Nagulakonda's life from his childhood in Andhra Pradesh. His grandfather was a goldsmith and his father a printer. Both influenced him to take up art. He spends most of his time visualizing and exploring different art forms. His pursuits have led him to sculpture, nail art on paper, metal engraving, and painting. Rajesh's previous Campfire titles include Magical Animals, Krishna, The Little Alien, Ganesha, Pride and Prejudice, the award-winning Buddha: An Enlightened Life.

"Kudos to Campfire for such a fun effort with such a fun story. With [48] other titles hitting the market over the next two years, distribution through Random House, and brilliant art in each based on the previews I've seen, I expect Campfire to become a major player in the graphic novel market."