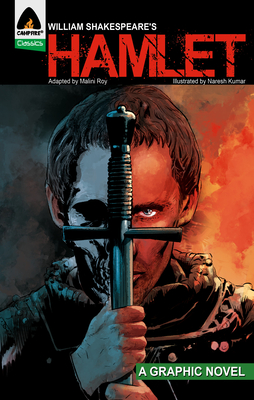 A concise, highly enjoyable adaptation of the classic Shakespeare drama; one of more than 85 titles Campfire has published since their introduction to North America in 2010.

Once upon a time on a dark winter night, a ghost appears on the ramparts of Castle Elsinore in Denmark. It closely resembles the recently deceased king of Denmark. The guards see it first, and then the scholar Horatio confronts it. But it doesn't speak to them. Impatient to know what the ghost's appearance means, they summon Hamlet, the prince of Denmark. Hamlet has returned to Denmark to attend his father's funeral. Yet, he finds himself also attending his mother Gertrude's wedding to his uncle Claudius, who has inherited the throne. What will the ghost tell Hamlet?
One of the most intense and intriguing tragedies of all time is built upon the answer to this question. William Shakespeare's Hamlet is not just a story of a mad prince out to avenge his father's death. It is also the story of the struggle of a nation against Fate. It is the story of human willpower battling the odds. It is not only the story of a man at war with the world around him, but also the story of a man in conflict with his own mind. It is the story of a time when something is rotten in the state of Denmark.

Malini Roy works as a freelance researcher and writer in Frankfurt, Germany. She would love to be able to create graphic novels. But a chronic inability to shape any form of visual art, other than that allowed by a blob of plasticine, has left her thrashing in the nether regions of writing and adapting scripts, such as a creative sequel to a short story by Bengali author Rabindranath Tagore (forthcoming, HarperCollins India, 2016). Time and again she bugs comics artists in order to produce the odd academic article, published in essay collections such as Textual Transformations in Children's Literature (ed. Lefebvre, Routledge, 2013).

A resident of New Delhi, India, Naresh Kumar describes himself as a seeker who is continuously trying to learn as much as he can, and his art is an expression of his curiosity towards the world. A firm believer in humanity, Naresh brings an experienced hand to the drawing board, and his photo-realistic style captures the subtle emotions of his characters. His work features in a number of titles from Campfire, which include World War Two, Genesis, Julius Caesar, Martin Luther King Jr., and Sinbad.

"The timeless tale... unfolds with straightforward briskness. Shakespeare's text has been liberally but judiciously cut, staying true to the thematic meaning while dispensing with longer speeches and intermediary dialogues... Illustrator Kumar pairs richly detailed interiors and exteriors with painstakingly rendered characters, each easily distinguished from their fellows through costume, hairstyle, and bearing... A solid introduction for budding lovers of the Bard." — Kirkus Reviews