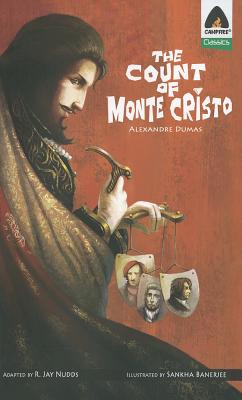 "While the first pages may have you thinking this is a love story about a beautiful couple you would be gravely mistaken. The Count of Monte Cristo is one of the best revenge stories of all time. Period.

Edmond Dantes has a successful career, a beautiful fiancé, and is genuinely a good man.  What destroys him is quite simply the jealously of his friends who want to claim his happiness as their own. Imprisoned and left for dead, years pass as he becomes nothing but a distant memory tucked away and forgotten. A great reckoning is coming though for the men who destroyed this innocent life and nothing on earth can save them from his vengeance. A dead man has nothing to lose while they have everything.

I’ve loved this book from a young age and the characters fill you with every possible emotion. You crave the personal destruction or success of each richly developed character that is meticulously laid out in layers upon layers that are slowly and deliciously revealed with the turn of each page."

When Edmond Dantès is imprisoned for a crime he didn't commit, he vows to escape and destroy those who betrayed him.

With his former life a distant memory, revenge drives him forward. Using the fortune left to him by Abbé Faria, he transforms himself into the powerful and enigmatic Count of Monte Cristo, and systematically hunts down the men who put him behind bars.

Acting as destiny's agent, Dantès must face not only his enemies, but also the moral dilemmas raised by his ruthless quest for justice. With skill and mercilessness, he manipulates those around him to do his bidding, leaving a trail of social carnage in his wake.

Can the man who once had so much to live for, complete his mission and find peace, or will fate thwart his plan at the very last?

Alexandre Dumas was born France in 1802. His father—a disgraced Bonapartist General—died while he was still a child, but his mother's tales of his bravery during the Napoleonic wars inspired the young Alexandre to write some of the best-loved adventure stories the world has known, such as The Three Musketeers and The Man in the Iron Mask (both also available from Campfire). Dumas died in 1870 and was buried in his hometown, but was transferred to Paris' pantheon in 2002 and interred alongside other French luminaries in honor of his enduring legacy.

R. Jay Nudds was born in Dublin. An avid reader of fantasy and science fiction in his youth, and an obsessive sports fan, he began writing seriously at the age of 17, turning his hand to novels, sports journalism and newspaper production before focusing on graphic novels.