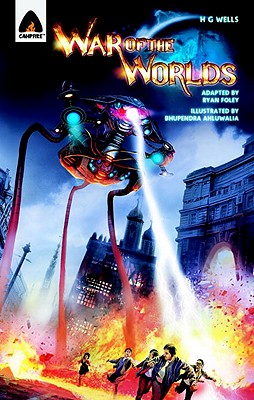 By H.G. Wells, Ryan Foley (Adapted by), Bhupendra Ahluwalia (Illustrator)
Unavailable to Order
Out of Print

London, England. At the dawn of the twentieth century, the most significant event in human history has come to pass. Contact from an alien planet has been achieved. Rocket capsules fired from the surface of Mars have crashed into the southern English countryside.

But what should be a moment of scientific curiosity and wonderful first contact between two alien worlds turns instead into disaster. The annihilative weapons of the Martians leave no doubt whatsoever about the nature of the alien contact -an outright invasion of Earth.

In the midst of the chaos and devastation, one man makes a desperate attempt to save himself and make his way back to his family. Follow his account of the incredible events he encounters in Campfire's vivid adaptation of H G Wells's masterpiece, The War of the Worlds.

Considered one of the pioneers of science fiction, Herbert George Wells was born in England on 21st September 1866. At the age of eighteen, Wells joined the Normal School of Science in Kensington where he was taught by T H Huxley.
This was a crucial period of his life as it had an immense influence on his writing. He enjoyed writing stories and articles and gradually moved into writing on a full-time basis. In 1895, his first major novel, The Time Machine, was published.
H G Wells continued writing until his death at the age of seventy-nine in 1946.

"Wells's classic sf story has been retold frequently since its original publication in 1898. It has also been updated several times, from Orson Welles's panic-inducing 1938 radio broadcast to the 2005 film starring Tom Cruise. This adaptation maintains the original setting and time period as aliens from Mars invade 19th-century England. . . . Despite the prevalence of War versions available in various formats, graphic novels seem to be a rarity. The art here captures the mood well and lends an air of excitement to the narrative, whether depicting explosive moments of warfare or the tense stillness of the narrator hiding in abandoned buildings. The story is mature but not terribly graphic. Recommended for young adult readers, particularly those who claim to hate reading." -- School Library Journal

“…a fantastic overview of this early sci-fi classic which delivers Wells' warning that mankind should not presume that because it enjoys a place at the top of the food chain, that it may not always be that way.”