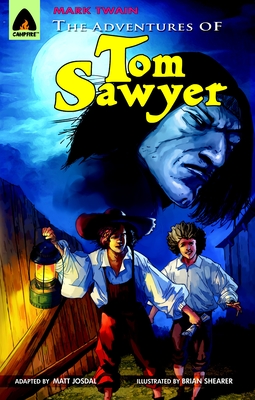 Tom Sawyer is a mischievous young boy with an undying hunger for adventure, and a knack for getting into trouble. He lives with his Aunt Polly in the Mississippi River town of St Petersburg, Missouri. He plays hooky from school; hangs around with Huck Finn, the unsophisticated son of the village drunkard; and deceives his friends into trading their treasures with him.

Tom falls in love with Becky Thatcher, a new arrival in town, who returns his affection initially, and even agrees to an 'engagement'. However, after a slip of the tongue from Tom, she walks off in a huff.

From innocent and imaginary adventures, Tom's life suddenly takes a new turn. One night, while Tom and Huck Finn are in a graveyard, they witness an incident they should not have. Terrified, they flee from the spot, and swear a blood oath that they will never reveal their secret to anyone.

Tom and Huck then find themselves entangled in a series of real and exciting adventures, with dangerous men constantly at their heels.

Can the boys stand up to the occasion, and become real-life heroes? Will they ever be able to reclaim their normal, carefree lives again?

Samuel Langhorne Clemans, known to most as Mark Twain, has been hailed by many as the father of American Literature. His two most famous works, The Adventures of Tom Sawyer (1876) and The Adventures of Huckleberry Finn (1884), are considered two of the greatest American novels of all time.

Twain was born in Florida, Missouri on 30th November 1835. He grew up in the town of Hannibal on the Mississippi River, which would eventually serve as the basis for the place where Tom Sawyer and Huckleberry Finn would live.

Twain grew up in Missouri at a time when it was a slave state. After the American Civil War broke out, he became a strong supporter of emancipation, and staunchly believed that the slave trade should be abolished.

Though he began as a comic writer, the tribulations he faced in his personal life perhaps served to turn him into a serious, even pessimistic, writer in his later years. He lost his wife and two daughters, and his ill-fated life never really allowed him to recover. Twain passed away in 1910, but he is still one of the best-loved writers around the world.