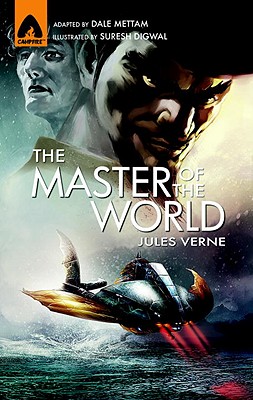 A sleepy American town is woken up in the middle of the night by horrifying noises. Terror-stricken citizens claim to have heard unexplained rumblings and there are reports of bright lights emanating from a nearby mountain.

As the head police inspector in Washington DC John Strock is assigned to investigate the mysterious happenings. He sets out on the case, having no idea what shocking secrets will be discovered.

During his investigation, reports of other inexplicable events around the country start to come to light. Unusual boats, fast cars and flying machines all play a part in the mystery as it unfolds. Strock starts to suspect that all these incidents are connected in some way, and strives to get to the bottom of it.

Will he succeed in his quest? Or will the Master of the World live up to his name?

Jules Gabriel Verne was born in Nantes, France on February 8, 1828. Over the following 77 years, he became both a prodigious writer and a creator of characters that came to be known throughout the world. His work continues to live on well beyond his death and he is known by many as the father of modern science fiction.
Sent to Paris to study law, like his father before him, Verne soon discovered that his real talent lay in writing. This gift established him as an author of exciting and extravagant adventures. Sometimes these stories revolved around the use of technologies of the day, such as in his novels Five Days in a Balloon and Around the World in Eighty Days. However, what made Verne really stand out were the flights of fancy he took with regard to the potential advances in technology. His fantastic creations were based, in many respects, on a keen understanding of science and the way it was moving forwards.
Verne died on March 24, 1905. Whatever reasons someone has for reading his works, one thing is assured: while his stories about the future range from frighteningly accurate, to wildly speculative, his novels provide an entertaining adventure based in a world that is not that distant from our own, but is intriguing, dangerous and thrilling.