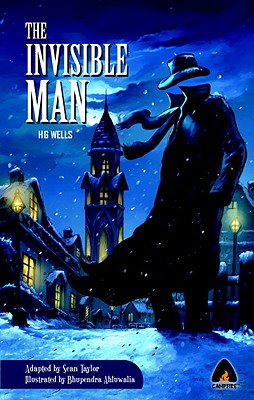 'The stranger came early in February, one wintry day, through a biting wind and a driving snow.'

When the residents of Iping first see him, he is wearing an overcoat and goggles, and is covered from head to toe with bandages. His hidden identity and mysterious behavior causes the locals to start asking questions. At first they assume he must have been involved in some kind of horrific accident. But the truth is far more alarming than that.

As the reality of the situation starts to become clear, only one thing is certain; the stranger is a troubled soul and can only deal with his personal fear by terrorizing the people around him.

First published in 1897, The Invisible Man is HG Wells's warning to the world about the dangers of science without humanity.

Considered one of the pioneers of science fiction, Herbert George Wells was born on September 21, 1866 in England.

At the age of eighteen, Wells joined The Normal School of Science in Kensington to study Biology. Here he was taught by TH Huxley. This was a crucial period of his life as it had an immense influence on his writing later in life.

Wells received a Bachelor of Science from the University of London in 1890 and began to teach. He enjoyed writing stories and articles alongside his day job and gradually moved into writing on a full time basis.


While most famous for his work in science fiction, Wells worked on a variety of genres. An advocate of social change and member of the British socialist group, the Fabian Society, Wells spent much of his later years writing about his views on politics and society, and even offered predictions about the direction in which the world was headed. HG Wells continued writing until his death at the age of 79 in 1946.